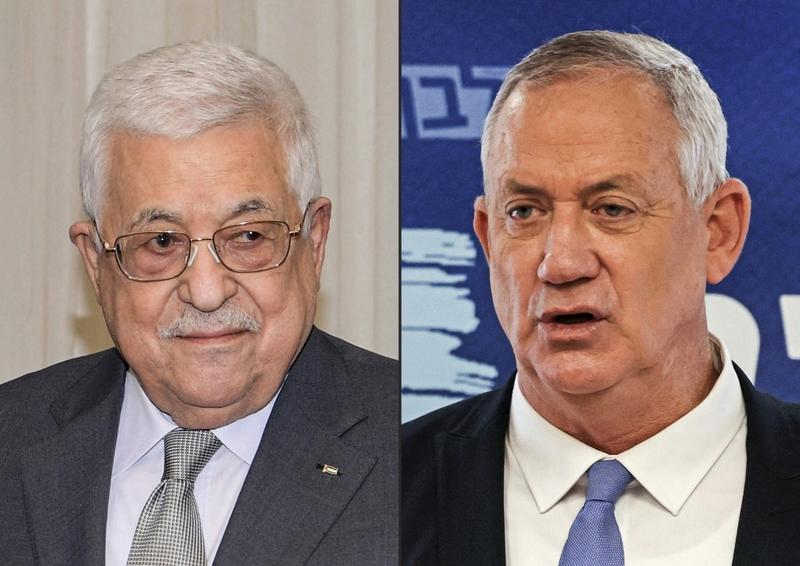 This combination of pictures created on Aug 30, 2021 shows (left to right) Palestinian president Mahmud Abbas during a diplomatic meeting in Ramallah in a handout photo provided by the Palestinian Authority's press office (PPO) on Aug 1, 2021; and Israeli Defence Minister Benny Gantz giving a press conference at his party's office in the Knesset in Jerusalem on June 7, 2021. (MENAHEM KAHANA, THAER GHANAIM / AFP / PPO)

Hamas spokesman in Gaza Hazem Qassem said that the meeting "would deepen the Palestinian internal division," adding "it will encourage some parties in the region to normalize ties with Israel."

Spokesman of the Palestinian Islamic Jihad (PIJ) Tareq Silmi said in a statement that the group rejects the meeting, adding that "it is a stab in the back of the Palestinian people who suffer and struggle against the occupation."

Meanwhile, the Palestinian left-wing factions, including the Popular Front for the Liberation of Palestine (PFLP), slammed the meeting, calling on Abbas that he should resolve the internal split and regain unity "instead of meeting Israelis."

On Sunday night, Abbas and Gantz met in the West Bank city of Ramallah and  discussed ways to improve the economic situation of the Palestinian territories, according to Palestinian official and Israeli media reports.

It is the first meeting held between Abbas and a senior Israeli government official since ties between the two sides had been severed in 2014 due to the continued Israeli settlement expansion and the Israeli measures in the East Jerusalem.

The new US administration of President Joe Biden has been pushing the two sides to go for trust-building and resume contacts in a bid to resume the peace talks.