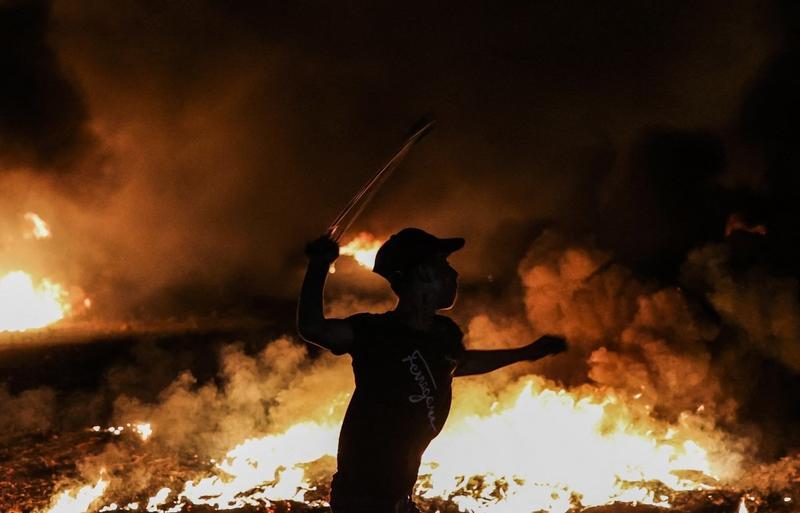 A Palestinian protester swings a slingshot near burning tyres following a demonstration along the border between the Gaza Strip and Israel east of Gaza City on August 28, 2021. (MAHMUD HAMS / AFP)

JERUSALEM / GAZA - Israeli aircraft struck Hamas sites in Gaza early on Sunday in response to incendiary balloons launched from the Palestinian enclave, the military said, as a recent rise in cross-border violence tests a fragile truce that ended fierce fighting in May.

Sanctioned by Hamas, the Islamist armed group that rules Gaza, Palestinian groups said on Saturday they were resuming protests at the Israel-Gaza border, aimed at pressing Israel to ease restrictions on the enclave. The Israeli military said hundreds of Palestinians gathered along the frontier during the night, hurling explosives and burning tires.

Sanctioned by Hamas, the Islamist armed group that rules Gaza, Palestinian groups said on Saturday they were resuming protests at the Israel-Gaza border, aimed at pressing Israel to ease restrictions on the enclave

The military said its troops responded with "riot dispersal means" and Gaza medics said at least six Palestinians were hurt, one seriously. A few hours later, Israeli pre-dawn air strikes targeted a Hamas weapons manufacturing complex and a tunnel it said was used by militants, after incendiary balloons were sent across the border.

There were no reports of casualties in the bombings.

An Egyptian-mediated truce ended the May conflict in which Gaza militants fired rockets towards Israeli cities and Israel carried out air strikes across the coastal enclave. At least 250 Palestinians and 13 people in Israel were killed in 11 days of fighting.

But violence has recently increased despite an Israeli announcement this month of a resumption of Qatari aid to Gaza, a decision that had been seen as bolstering the truce.

Palestinian groups say Israel has yet to make good on its word and over the past two weeks militants have fired a rocket and sent balloons carrying incendiary material into Israel, setting off brush fires and drawing Israeli strikes on Hamas facilities.

Citing security threats, Israel keeps Gaza under a blockade, tightly restricting movement in and out of the territory that is home to 2 million Palestinians. Egypt also maintains Gaza restrictions.