'Newcomers' using tea and tourism to brew up success

By Zhang Yi in Beijing and Hu Meidong in Fuzhou 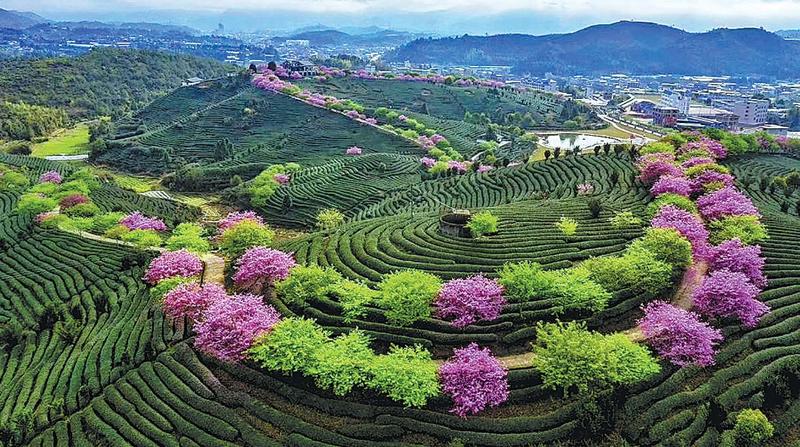 Two decades ago, a group of tea farmers crossed the Taiwan Straits in search of opportunities on the Chinese mainland.

They settled in the mountainous town of Yongfu, Fujian province, where the geography and climate are similar to those in the area around Alishan Mountain, a major oolong tea production area in Taiwan.

After years of efforts opening up the barren hills, cultivating tea trees and building plants to process the leaves, the newcomers took root in the once backward town, which is now dotted with green terraced gardens.

Their success in growing oolong tea means Yongfu is now known as the "Alishan Mountain of the Chinese mainland". Now, the younger generation, many children of the pioneers, is gradually taking over the local tea industry. 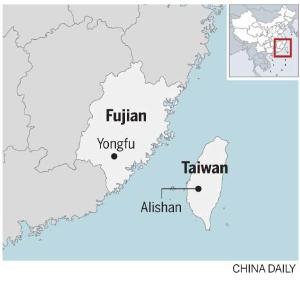 Bolstered by central government policies to promote rural vitalization and provide people from Taiwan with the same status and treatment as the locals, the young people have created several tourism projects around the tea gardens to drive a sectoral upgrade.

"People like me, from the first generation, are now in their 60s, so we are slowly making way for the next generation, people generally in their 30s with a good level of education," said Hsieh Tung-ching, who was the first entrepreneur to arrive in Yongfu from Taiwan and grow tea.

"Their soil and infrastructure are better than ours were, so they should carry on the older generation's hardworking, pioneering spirit."

The young people have developed many new tourism projects, using the internet to promote brands and developing derivatives such as prepackaged milk tea and tea bags, which have never been seen in the area before.

Bolstered by central government policies to promote rural vitalization and provide people from Taiwan with the same status and treatment as the locals, young people have created several tourism projects around the tea gardens to drive a sectoral upgrade

Yang Yung-an, who took over his father's tea garden five years ago, sensed the growing trend for outdoor education in the mainland early, so since the end of 2018 he has cooperated with local schools to design related activities for teenagers.

The programs allow students to get close to nature on the mountains and learn to identify different plants and insects, pick tea leaves by hand and take part in some of the processing steps at the 31-year-old's facility.

They also learn about China's tea culture by attending a demonstration in which performers explain how to make the perfect cup of tea. Later, they can take the tea they have processed home so they can taste it with their families.

"Because they had been in classrooms for so long, the students were so happy that they even thought the weeds were interesting. They brought home the tea they had made, so some of the families learned about it and bought more later. The activities had a very good promotional effect," Yang said.

Last year's COVID-19 outbreak restricted the number of students visiting the tea garden to about 4,000 students, a little more than half the 7,000 who attended in 2019.

"My father's generation focused on tea production. Now, I have a tourism development plan for the garden, including tour routes and the creation of scenery for visitors to photograph," Yang said. 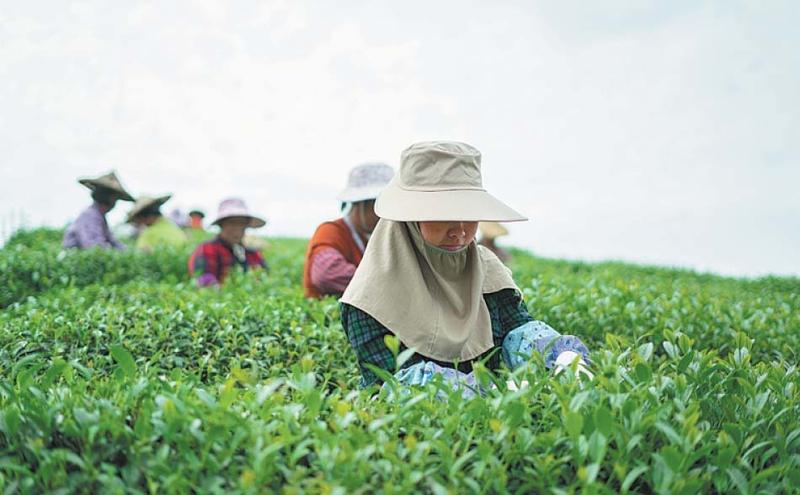 Every Spring Festival, Hsieh, the pioneer, drinks tea and talks with tourists in his cherry tea garden.

Fifteen years ago, he planted 8,000 cherry trees in his hillside tea garden. Viewed from afar, the paths of pink cherry blossoms can be seen winding through the green terraces.

Scenery such as this has attracted a large number of tourists to the town.

"I was in my 40s when I first came to Yongfu, and I was the first one to try growing tea here. After I produced tea as good as that grown in Taiwan, a lot of farmers from the island came here, but that was 10 years after me," he said. "The tea grown here is sweet and fragrant."

The people of my father's generation who started the tea plantations had great persistence and perseverance. There were many uncertainties in building infrastructure in the mountains. Sometimes, my father had to drive five or six hours to buy a single component, such as a connector for a water pipe.

Hsieh Tung-ching, the first entrepreneur to arrive in Yongfu from Taiwan and grow tea

The Taiwan farmers employed traditional tea garden management methods, such as using sheep to eat the weeds, along with advanced techniques, such as "watering" the trees with soybean milk to raise the level of nutrition in the soil.

Because agriculture is a long-term investment, many of the farmers now regard Yongfu as their home in the mainland. They have adopted the lifestyle and married locals, and many of the families are now in their third generation, Hsieh said.

Yang said his father came to Yongfu in 2006 after hearing about the high-quality tea produced there. He hired people from Taiwan and spent about three years terracing the land and introducing or restoring the infrastructure. However, the results didn't become apparent until about 2010.

"I was still at school then. I often came here during the holidays and watched my father build our tea garden from scratch," Yang said.

"The people of my father's generation who started the tea plantations had great persistence and perseverance. There were many uncertainties in building infrastructure in the mountains. Sometimes, my father had to drive five or six hours to buy a single component, such as a connector for a water pipe."

Yang said he knew from a young age that he would take over his father's business, so he studied tea science at a college in Fujian, where he met his wife, a Guangdong province native who was studying tea culture.

"We work well together. I am in charge of tea production, and she is better at tea culture promotion. We often travel countrywide to develop markets, and we invite many people to visit our plantation," he said. 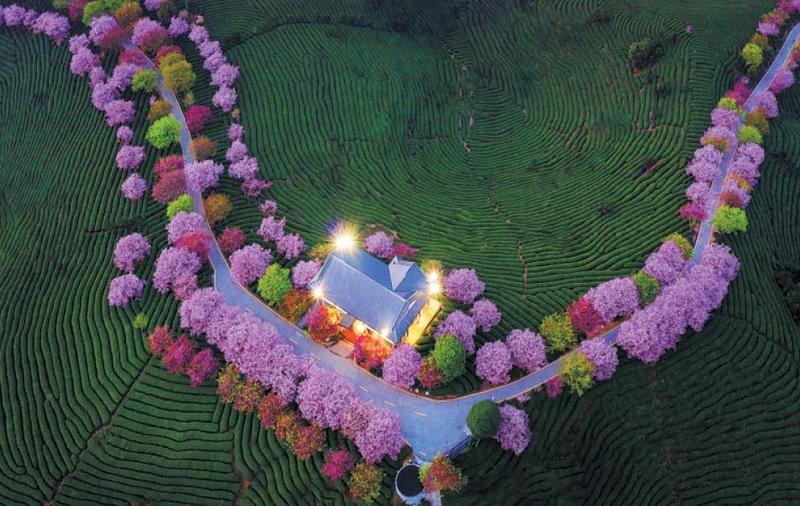 Yongfu has become a place of intensive investment by entrepreneurs from Taiwan, and is the mainland's biggest production base for Taiwan high-mountain oolong tea.

In 2008, a Taiwan farmer entrepreneurship park was launched. It is now home to over 70 Taiwan-funded tea companies.

Yongfu is at the forefront of cross-Straits exchanges, attracting visits from tea experts from Taiwan along with college students majoring in rural planning and landscape design

In March, the central government rolled out measures to provide equal treatment for agricultural enterprises from Taiwan, including the use of land and forests, and funding. The moves are aimed at supporting their participation in the development of agriculture and forests on the mainland and boosting rural vitalization.

"Many policies have been tested in Yongfu before being rolled out nationwide, because a large number of people have arrived from Taiwan," Yang said. The March policy includes allowing people from the island to obtain forest rights certificates on the mainland, which can be used as collateral for bank loans.

"The policy was piloted in Yongfu in 2017, and I was the first to get a certificate, which gave us a sense of belonging," Yang said.

Last year, Yongfu's tea farmers helped draft the national food enforcement standards for Taiwan oolong tea, which also apply if such tea is brought to the mainland from the island.

The town is at the forefront of cross-Straits exchanges, attracting visits from tea experts from Taiwan along with college students majoring in rural planning and landscape design.

Yang said the local government is working to improve the tourism infrastructure, including building a sightseeing train like the one at Alishan Mountain. This year, he plans to build a campsite, so visitors can pitch tents or park trailers, and introduce smaller attractions including a paddling pool.