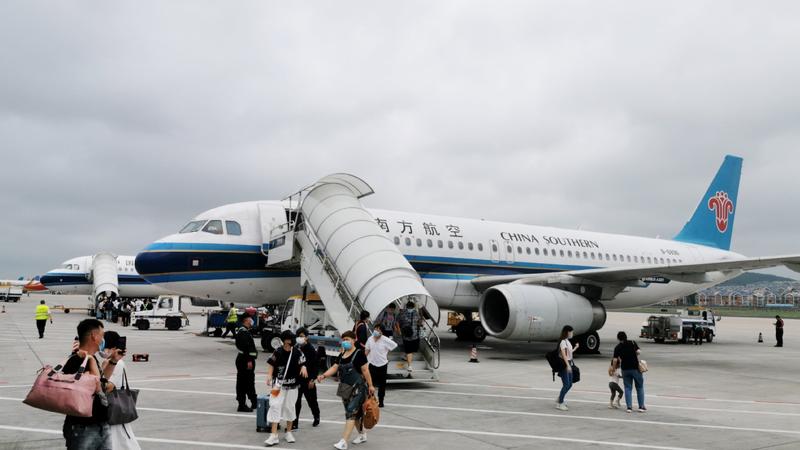 As front-line workers at China's international airports have recently emerged as particularly vulnerable to contracting the novel coronavirus, officials and experts have required stricter isolation and more frequent testing of them, while considering providing booster shots to enhance their immunity.

An outbreak in Nanjing, Jiangsu province, that spread to more than 10 provincial-level regions has been traced to nine airport workers in the city who cleaned a plane arriving from Russia on June 10.

Ding Jie, deputy director of the city's disease control authority, said the virus likely began spreading because the workers did not obey sanitation and clothing-change protocols. The virus was further transmitted to other staff members, as these cabin cleaners were in charge of handling trash from international and domestic flights.

Special attention should be paid to the disposal and disinfection procedures for transportation vehicles and goods from overseas.

He Qinghua, an official at the National Health Commission's Disease Prevention and Control Bureau

In June in Shenzhen, Guangdong province, a customs worker in charge of conducting epidemiological investigations on passengers arriving at the city's international airport tested positive for the virus.

Local officials said that based on genome sequencing, the infection was linked to an imported case from a flight from South Africa. Follow-up testing at the airport soon turned up one more infected case－a worker at the airport's restaurant.

Exposure to shipments from overseas also presents risks. Amid a small cluster of infections at a cargo station at Shanghai Pudong International Airport in November, the earliest two cases involved people who had cleaned a shipping container from North America about 10 days before being diagnosed.

On Monday, another cargo worker at the Shanghai airport tested positive for COVID-19, according to the city government.

He Qinghua, an official at the National Health Commission's Disease Prevention and Control Bureau, said recent outbreaks showed China must beef up virus defense efforts to plug loopholes against imported infections, adding that since May last year, all local outbreaks were caused by imported cases.

"Special attention should be paid to the disposal and disinfection procedures for transportation vehicles and goods from overseas," he said during a news briefing last week.

He added that high-risk workers should be isolated in closed-loop management to prevent them from coming in contact with others. These include port workers directly exposed to passengers or shipments from overseas, as well as staff members involved in transferring goods, cleaning, epidemiological study and sampling.

Hu Shanlian, a professor of health management at Fudan University's School of Public Health, said during an interview with Knews.com, an online news outlet, that because cleaners often change their workplaces, airports must have thorough and timely information on their vaccination status and movements.

"Aircraft cabins are airtight, so heightened precautions should be taken to prevent aerosol transmission," he said. Aerosol, formed when virus mixes with droplets in the air, can be inhaled to cause infection.

Shao Yiming, a researcher at the Chinese Center for Disease Control and Prevention, said that people at higher risk of virus exposure, including airport and customs workers, will likely get a booster shot in the future, although research is underway to determine the necessity.

Jin Dongyan, a virologist from the University of Hong Kong, suggested testing antibodies in vaccinated airport personnel. If their antibodies turn out to be low, an additional shot can be administered to boost their immunity.