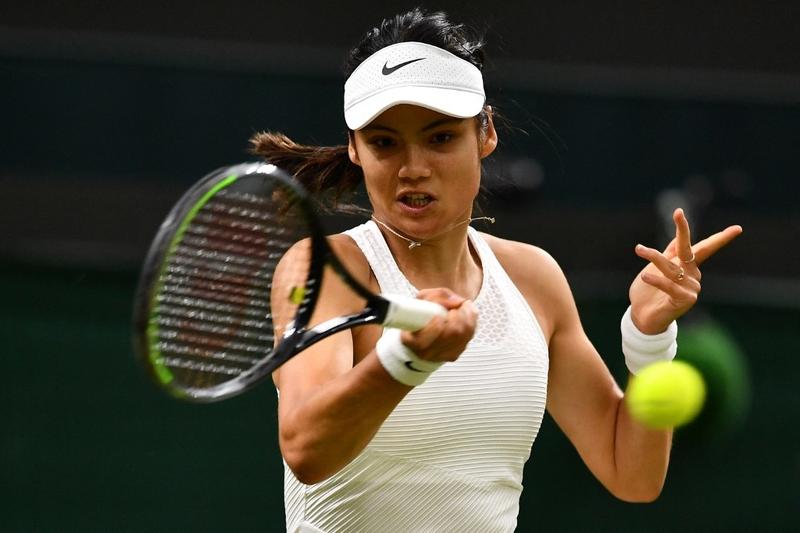 Britain's Emma Raducanu returns against Australia's Ajla Tomljanovic during their women's singles fourth round match on the seventh day of the 2021 Wimbledon Championships at The All England Tennis Club in Wimbledon, southwest London, on July 5, 2021. (BEN STANSALL / AFP)

British tennis prodigy Emma Raducanu has hailed her family ties to China and her adoration of one of the country's sporting greats, Li Na, as key to her breakthrough run at Wimbledon.

Emma Raducanu's attacking style is reminiscent of the lethal backhands that Li Na unleashed on her way to winning two major titles, at the 2011 French Open and 2014 Australian Open

Born to a Chinese mother and Romanian father, Raducanu has taken the Grand Slam by storm over the last week, thrilling Britain's success-starved tennis fans with her historic run to the last 16.

The 18-year-old's tournament came to an unfortunate end on Monday when she fell ill in her fourth-round match against Australia's Ajla Tomljanovic.

But by then she had already done more than enough to convince observers that she has what it takes to succeed at the highest level. Raducanu, who entered the main draw as a wild card and ranked No 338 in the world, credits her mental fortitude to her mother's background and the influence of China's two-time Grand Slam champion Li.

"It's really such a coincidence that those are two of my favorite players that I try to model my game after, and I happen to have a connection to both countries," Raducanu said of Li and Romania's Simona Halep after beating Sorana Cirstea in straight sets in the third round on Saturday to become the youngest British woman to reach the last 16 at Wimbledon in the Open era.

"I think it's definitely helped me, the mentality that both of them bring …they both come from very hardworking countries."

Raducanu's attacking style is reminiscent of the lethal backhands that Li unleashed on her way to winning two major titles, at the 2011 French Open and 2014 Australian Open.

"Even though Li Na has retired, I've watched lots of her matches on YouTube, because she was really aggressive," Raducanu said in an inews.co.uk report published on Monday.

"Her movement was what impressed me the most. She was so agile and quick－and very powerful. She wouldn't miss an opportunity to be aggressive."

Raducanu trailed 4-6, 0-3 against Tomljanovic when she needed medical treatment for an apparent stomach ailment and was forced to withdraw. Wimbledon organizers later said the problem was "difficulty breathing".

Had she been healthy, the Court 1 crowd could have expected Raducanu to stage a rousing comeback, similar to her second-set turnaround against 42nd-ranked Marketa Vondrousova in round two, when she battled back from 0-3 down to stun the 2019 French Open finalist 6-2, 6-4.

Born in Toronto, Raducanu moved with her parents, who work in finance, to Kent, England when she was 2 years old. She first picked up a racket at 5, and after showing early promise at the Bromley Tennis Academy, earned a scholarship from the Lawn Tennis Association, allowing her to train while continuing her school work.

Incredibly, she has spent the last 12 months combining her academic studies with tennis, and in May sat Britain's A-Level exams, in maths and economics. She will discover her results next month. "Emma is a perfectionist and won't be happy with an A, it has to be an A-plus," one of her coaches, Matt James, was quoted by The Sun.

Raducanu says her drive and discipline are in large part thanks to her Chinese mother.

"My mom has always instilled a lot of the qualities, like discipline and respect for other people, into me, so I think having parents like I do, they always push me, they have high expectations, so I've always tried to live up to that," she said.

"My mom's side of the family, when I go over to China, they are so mentally resilient. It's like nothing can bring them down. I would say I take a big part of my inspiration from her. My mom has worked very hard," added Raducanu, who used to visit her mother's home city of Shenyang, Liaoning province during holidays and even practiced tennis at a local sports school.

Remarkably, Raducanu, had only played one WTA tour-level match before Wimbledon, with her grounded nature set to be tested like never before on and off the court in the face of her new-found fame.

"It's just surreal what's going on," she said of the fans' adulation at Wimbledon.

"Not sure they got the right person here, I think they thought it's someone else," joked Raducanu, who is projected to climb to around world No 170 next week.

Former world No 1 Tracy Austin was among a host of former players and pundits backing Raducanu to continue her ascent.

"In so many ways this has been a life-changing week for her. She was ranked 338 and now she's going to go into the 100s so it will make it much easier for her to play higher-level tournaments," Austin told the BBC.

"She has a wonderful game, she's very athletic, a very good head on her shoulders, and she seems very grounded because she has stayed in school. She has got ways to win points with weapons, she's got a terrific defense. It all looks great."