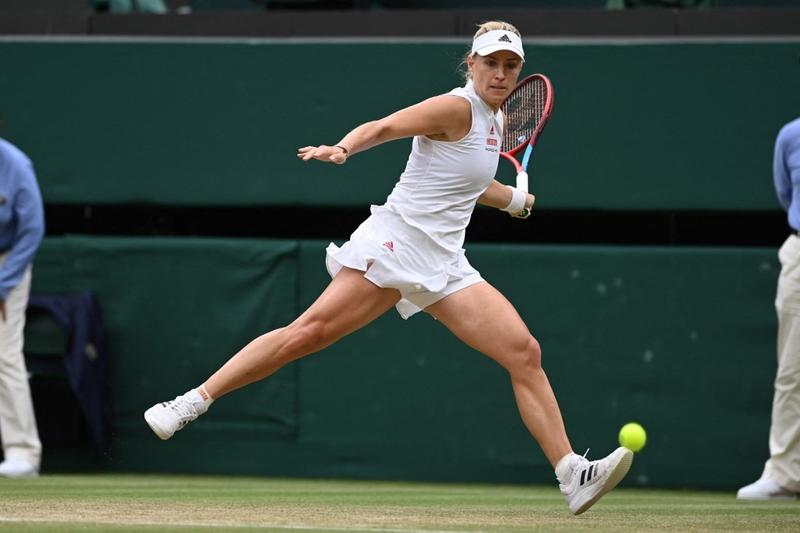 Germany's Angelique Kerber returns against Czech Republic's Karolina Muchova during their women's quarter-final tennis match on the eighth day of the 2021 Wimbledon Championships at The All England Tennis Club in Wimbledon, southwest London, on July 6, 2021. (GLYN KIRK / AFP)

LONDON - Former Wimbledon champion Angelique Kerber put in a strong show to beat an error-prone Karolina Muchova 6-2 6-3 on Tuesday to reach the semi-finals of the grasscourt Grand Slam.

The German will face top seed Ash Barty in the last four.

The 2018 champion Kerber, seeded 25th at the All England Club, arrived for her quarter-final having beaten Czech Muchova both times in their two meetings in two weeks in 2019 and never lost control of the match under the closed Court One roof.

Former world No1 Kerber, who also won the Australian Open and the US Open in 2016, used her forehand immaculately against 19th seed Muchova and also mixed her drop shots expertly to set up chances for winners.

Muchova, who had her left thigh strapped, did not help her cause by committing 27 unforced errors against the nine winners she managed during the 75-minute contest.

The Czech was also guilty of failing to take her chances, managing to convert only one of the eight break-point opportunities she had on the left-hander's serve.

The 33-year-old Kerber, who arrived at Wimbledon with a title from Bad Homburg in her home country in the lead-up and is the only former champion left in the draw, broke Muchova twice in each set.

The German sealed the contest when Muchova sent a forehand long on her second match point.

She fired 15 winners and converted four of her six break point opportunities to reach her first major semi-final since her title-winning run at Wimbledon three years ago.

The manicured grasscourts at the All England Club have always brought out the best in Kerber, who was also a runner-up in 2016 and reached the semi-finals in 2012.

"I just try to continue my play on grass," Kerber told reporters. "To have the confidence from last week, coming here with a title in my bag, also gives me confidence that grass is really my surface and I play well on this surface."

Her next opponent Barty comfortably won her all-Australian clash against unseeded Ajla Tomljanovic 6-1 6-3.

"I'm really looking forward to play against Ash," she said. "We never played on grass court. She played so great the last few months, years. I know that I have to play my best tennis, and she will push me to that, to give everything out there.

"I love to play on grass. I'm back here in the semis. I will try to enjoy it, playing another good match. Of course I'll go out there with the mindset to try to win the match."