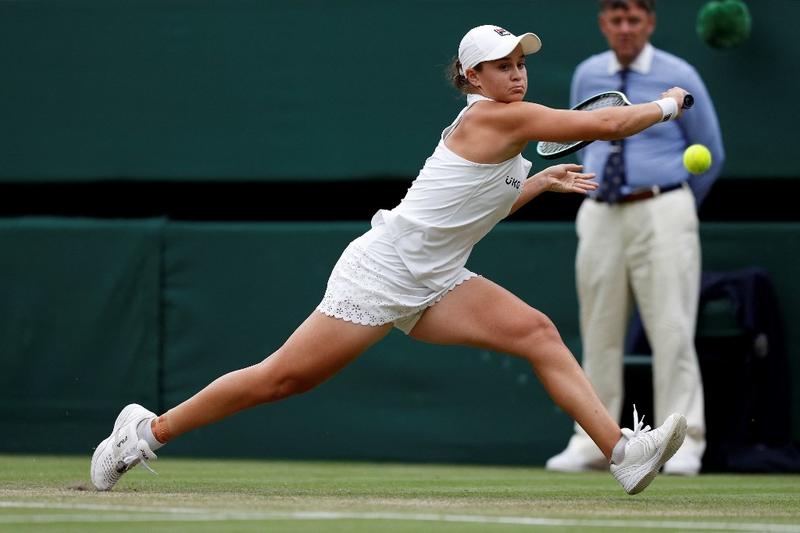 Australia's Ash Barty returns against Australia's Ajla Tomljanovic during their women's quarter-final tennis match on the eighth day of the 2021 Wimbledon Championships at The All England Tennis Club in Wimbledon, southwest London, on July 6, 2021. (ADRIAN DENNIS / AFP)

LONDON - World number one Ash Barty outclassed compatriot Ajla Tomljanovic 6-1 6-3 to reach the Wimbledon semi-finals on Friday and set up a meeting with 2018 champion Angelique Kerber.

Ash Barty won the French Open in 2019, becoming the first Australian to do so since Margaret Court in 1973

In the first all-Australian women's Grand Slam quarter-final since the 1980 Wimbledon championships, the 25-year-old Barty produced a calm and composed display on Centre Court.

Tomljanovic had battled past British wildcard Emma Raducanu the night before to reach her first Grand Slam quarter-final, but was nowhere to be seen in a one-sided first set.

But the 28-year-old did make more of a match of it in the second, breaking the Barty serve twice.

Barty always had another level though and ended Tomljanovic's resistance in little over an hour.

"Ajla is an incredible competitor - I've played with her a lot, I've practised with her, all Aussies back home are proud of her and it was bloody nice to share the court with her today," top seed Barty, who had made the singles quarter-finals at the All England Club for the first time, said on court.

"This is a dream come true. I know you hear that a lot but this is my dream and I'm extremely grateful to have an opportunity to live out what I love to do this afternoon."

Barty has made no secret of her desire to win her first Wimbledon title, 50 years after Evonne Goolagong, who also has indigenous Australian heritage, won her first title. 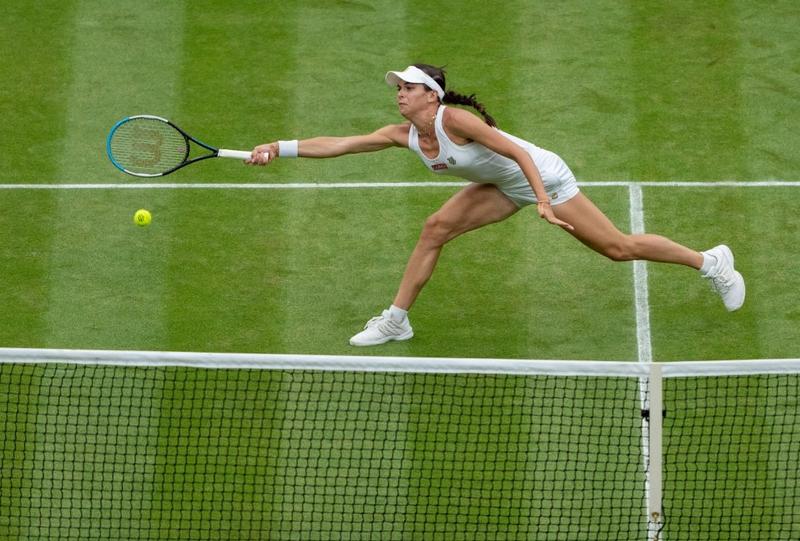 Australia's Ajla Tomljanovic returns against Australia's Ashleigh Barty during their women's quarter-final tennis match on the eighth day of the 2021 Wimbledon Championships at The All England Tennis Club in Wimbledon, southwest London, on July 6, 2021. (AELTC / JED LEICESTER / POOL / AFP)

She wears an elegant FILA trailblazer outfit modelled on Goolagong's and her stylish all-court game would not have looked out of place in any era.

Barty won the French Open in 2019, becoming the first Australian to do so since Margaret Court in 1973.

But despite winning the Wimbledon girls title in 2011, she has not always produced her best on the London lawns.

There is a growing confidence about Barty this time, however, although 33-year-old left-hander Kerber represents a daunting semi-final obstacle.

"The ultimate test - Angie's had success here before. I love that match-up. She knows her way around this court and I know I need to play well to give myself a chance in that match," Barty, who has dropped only one set so far, said.

Barty was in cruise control in the opening set as her variety of spins and angles flummoxed the world number 75.

To her credit Tomljanovic managed to make some inroads in the second set, breaking in the first game and then again to drag herself back from 4-1 down.

But Barty was not in the mood for overtime and got the job done in efficient fashion without needing top gear, serving a couple of aces as she held for victory.