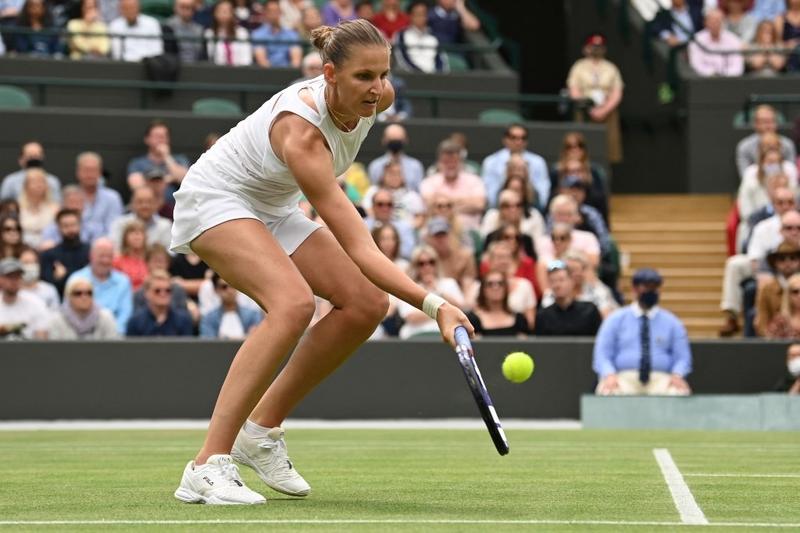 Czech Republic's Karolina Pliskova returns against Switzerland's Viktorija Golubic during their women's quarter-final tennis match on the eighth day of the 2021 Wimbledon Championships at The All England Tennis Club in Wimbledon, southwest London, on July 6, 2021. (GLYN KIRK / AFP)

LONDON - Facing an onslaught of 116 mph missiles flying in from Karolina Pliskova, there was little Viktorija Golubic could have done to avoid the barrage on Tuesday as the Czech finally reached the Wimbledon semi-finals after almost a decade of trying.

Karolina Pliskova tops the women's ace count for the tournament with 40, including the eight she belted down on Tuesday, and has a success rate of winning 81% of points on her first serve

Neither player had reached the last eight of the grasscourt major before this week but it was big-hitting Pliskova, a former world number one, who made her greater big-stage experience count with a rapid-fire 6-2 6-2 win on a floodlit Court One.

"Super happy to be through. It's my first semi-final. First time on this court this year. I had to work really hard to get to this court," said the 29-year-old, who can look forward to a Centre Court date with Belarusian second seed Aryna Sabalenka.

"I am going to enjoy this moment, because it has never happened for me."

It was a very noisy affair on Court One, but not because the players were creating a racket.

The torrential downpour that kept hitting the translucent roof often drowned out the sound of the shots being exchanged by the players and after Golubic saved a break point to draw level at 2-2 in the first set her game unravelled spectacularly.

Eighth seed Pliskova romped through the next seven games, dropping only four points on serve en route to taking the first set, as she steamed ahead 6-2 3-0.

Golubic owns a glorious one-handed backhand but there were only fleeting sightings of her trademark shot as Pliskova's greater firepower proved decisive.

In their only previous meeting the 66th-ranked Swiss had staged a spectacular comeback to beat Pliskova after being a set and 4-2 down.

If Harry Potter fan Golubic hoped to conjured another great escape on Tuesday so she could become the first Swiss to reach the women's semi-finals since Martina Hingis in 1998, Pliskova swiftly snuffed out those plans with her thunderbolt deliveries.

That serve got the 6-foot-1 Pliskova out of trouble when she faced three break points at 4-2 up in the second and, although she squandered her first three match points in the next game, a Golubic forehand into the tramlines handed victory to the Czech.

"Everyone saw what the key was today... I wasn't able to get into one rally when she was serving. That was really unbelievable," said a dejected Golubic, who has stormed 71 spots up the rankings since the start of the year.

"She was serving great. It was tough to read."

Pliskova tops the women's ace count for the tournament with 40, including the eight she belted down on Tuesday, and has a success rate of winning 81 percent of points on her first serve.

Having been broken just three times in 45 service games over five matches, she will be a tough nut to crack even though she has lost both of her previous matches against Sabalenka.

"I feel like I am improving with every match and have improved my footwork. I am feeling super fit," said Pliskova, who has reached the last four without dropping a set.

"I feel my game is quite good the last two weeks in practice and matches. We had some good preparation and hopefully we can continue."