A river that seals bonds

Hong Kong and Jiangxi province have forged a special relationship, with residents at the source of the Dongjiang River going all-out to protect the quality of the water that Hong Kong imports from the Chinese mainland. Li Bingcun reports from Shenzhen. 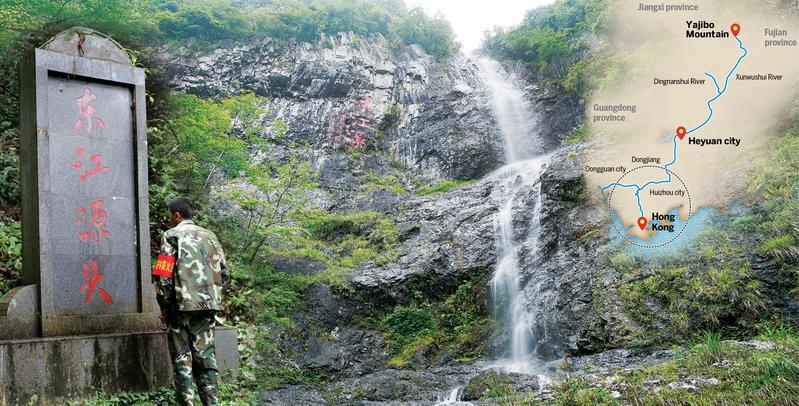 People fall in love for no reason. For Wen Wenshu, a 28-year-old ambitious man from a mountainous town in Jiangxi province, there was a reason: Dongjiang, the mother river.

The Dongjiang River — the eastern tributary of the Pearl River in Guangdong province from which Hong Kong gets the bulk of its water supply — has not only helped foster deeper collaboration between the Hong Kong Special Administrative Region and the mainland in the past few decades, but it has also brought romance for people on both sides of the border.

Many people in Hong Kong may know that the water we drink comes from the Dongjiang River, but it is an abstract concept. After our visits, we were able to understand how people lived around the source, and figure out how people along the river could work together to protect it

Wen met his love, Kwan, a 29-year-old from Hong Kong, who was sent to Wen’s hometown, Xunwu county, to help conserve the environment around the headwaters of the Dongjiang River.

In 2010, Wen, then a high school student, began to volunteer in a tree planting project organized by Kwan’s organization — Friends of the Earth, a green group in Hong Kong.

After Hong Kong had suffered a long dry spell in the 1960s that caused a severe drought and water shortage, the city began a water supply program that runs through southern Jiangxi into Guangdong, providing Hong Kong with most of the fresh water it needs.

To ensure a steady supply of fresh water, Hong Kong has been importing Dongjiang water since 1965 with the full support of the central government. Aided by a large-scale water supply system between Shenzhen and the HKSAR, millions of cubic meters of Dongjiang water have been pumped into Hong Kong each year, contributing about 80 percent of the city’s fresh water supply.

Chow Kwan, a 92-year-old Hong Kong resident, recalled that during the drought, people had to wait for up to four days to get fresh water. He said that every drop of water was so precious that taking a shower was a luxury. They used their hands to wipe off sweat.

Because of the irregular supply, many people had to stop working to save water. They would use anything available to collect water, including buckets made of wooden planks tied together. Chow still remembers the joy of being able to bathe every day after Hong Kong began getting its Dongjiang water supply. He said that the cross-border water project was completed at a time when the mainland was facing economic hardship. Many Hong Kong people were moved by the nation’s support.

In return, Friends of the Earth launched a tree-planting program between 2009 and 2017, sending volunteers to Xunwu to plant trees with the help of local residents. 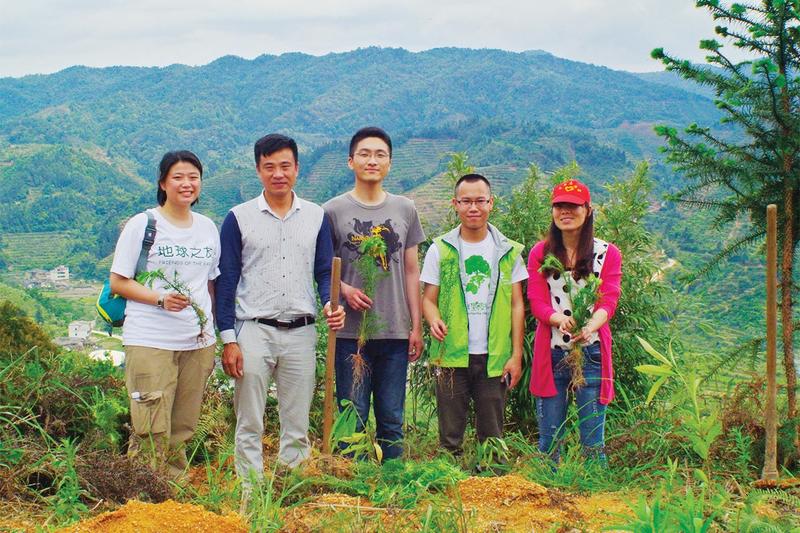 Wen Wenshu (second from right), volunteers from Hong Kong’s Friends of the Earth, and local villagers participate in a tree-planting program in Xunwu county, Jiangxi province, to protect the Dongjiang River, which supplies water to Hong Kong. (PHOTO PROVIDED TO CHINA DAILY)

For Wen, the tree-planting project he participated in 2010 fueled his passion for nature conservation, and showed him that millions of people in the Dongjiang downstream depend on the water from his hometown.

Little did he know that he was also on his way to building up a romantic relationship. In 2012, Friends of the Earth asked Wen to take care of the trees in “Hong Kong Forest” that were planted by local villagers and volunteers from Guangdong and Hong Kong. Wen helped find suitable locations for planting trees, contacted suppliers to procure saplings, and got villagers together to protect the trees. As of 2017, about 185,000 trees had been planted.

Kwan first met Wen in 2016 when she turned up to supervise his work. Their passion for nature drew them closer. They maintained contact after the project ended and finally tied the knot in May this year in Xunwu.

In 2004, scientists from Jiangxi identified the long-disputed origin of the Dongjiang River — the Yajibo Mountain in Xunwu county. It was good news for Xunwu, but not so much for the residents of Dongjiangyuan village, which was at the base of the mountain. It meant they would have to vacate their homes, which had been there for generations, to avoid contaminating the drinking water for millions of people in the river’s downstream.

Zhang Changquan, former Party secretary of Dongjiangyuan village, told China Daily the last family in the village moved out in 2017. The Yajibo Mountain is now a no-man’s land, he said, pointing to the broken relics of mud houses buried among the bushes. About 500 households in the village, the nearest human habitat to the headwater, had to be evacuated to ensure better protection and less interference with the water supply.

The villagers left behind vacant homes, sheds, crops and fruit trees in the fields, while the ridges are now covered with weeds and wild flowers. Only local rangers, dressed in green uniforms and armed with hooks, can be regularly seen there now. Signs of trees of navel oranges — a well-known specialty of Jiangxi — could still been seen at the site where Zhang’s village used to stand.

Along the way to the source of the Dongjiang River in the middle of the mountain, Zhang introduced the forest like a hospital charge master — “Here is the grass-leaf sweet flag, a popular potted plant grown on rocks in streams, and that is the wild chestnuts we used to eat.”

The headwater’s fame has also put the small county that relies heavily on agriculture in the spotlight, with the place having undergone major changes. To Zhang, the mountain is still the same as when they left the village. But he and the villagers know it is now a treasured land that has to be fully protected.

“The Dongjiang River has bonded me and my wife. It linked me to a broader world. It saw the start of my career and our love journey. It really means a lot to me,” Wen said. A young girl whose family had once received the Hong Kong volunteers had just enrolled at a Hong Kong university, he added. 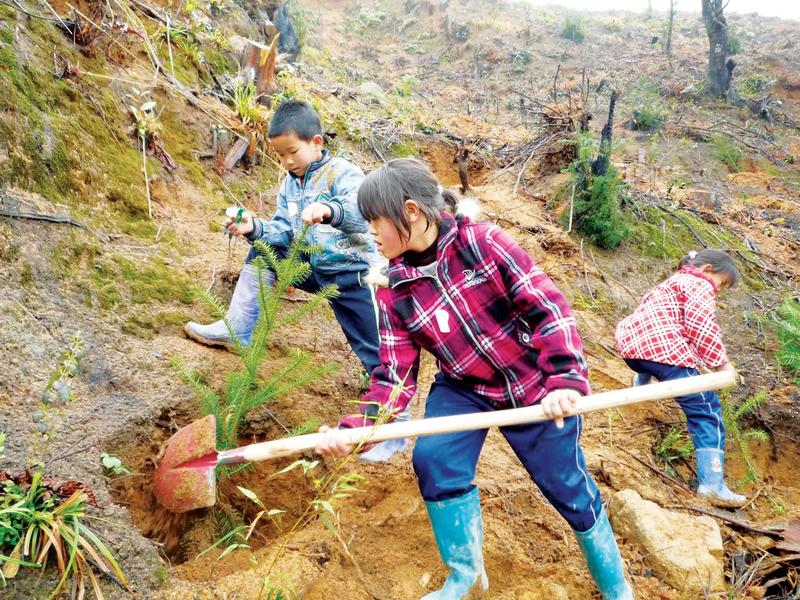 The bonding between Jiangxi and Hong Kong is mutual, and staying in small villages in the province is unforgettable for Esther Lo Yin-yue, a former China project officer with Friends of the Earth. She led volunteers to Xunwu for a week once every three months from 2013 to 2015.

Recalling her experiences there, Lo said she had tried making a cooking fire, gazed at the Milky Way, and attended a celebration to worship local gods — things she rarely did in Hong Kong. It was also in the county that she saw the narrow stream flowing down the Yajibo Mountain and converging with the Xunwu river to form the biggest portion of the Dongjiang River. “Previously, many people in Hong Kong may know that the water we drink comes from the Dongjiang River, but it is an abstract concept. After our visits, we were able to understand how people lived around the source, and figure out how people along the river could work together to protect it,” Lo said.

Zhang’s village was among those that had to relocate to protect the water source. Some residents of Qing Feng village living at the foothills in the northeastern part of the Yajibo Mountain also had to move out, leaving behind empty mud houses and cowsheds.

The massive relocation plan was part of comprehensive efforts by counties in the area, which involved multipronged approaches such as closing down mines and returning farmland to forests. According to media reports, Xunwu, Anyuan and Dingnan counties in the city of Ganzhou had to close or relocate 2,540 high-pollution enterprises from 2011 to 2015. These counties had to strictly screen enterprises intending to make a foray into the protected lands, resulting in huge economic losses as the counties rely heavily on agriculture. 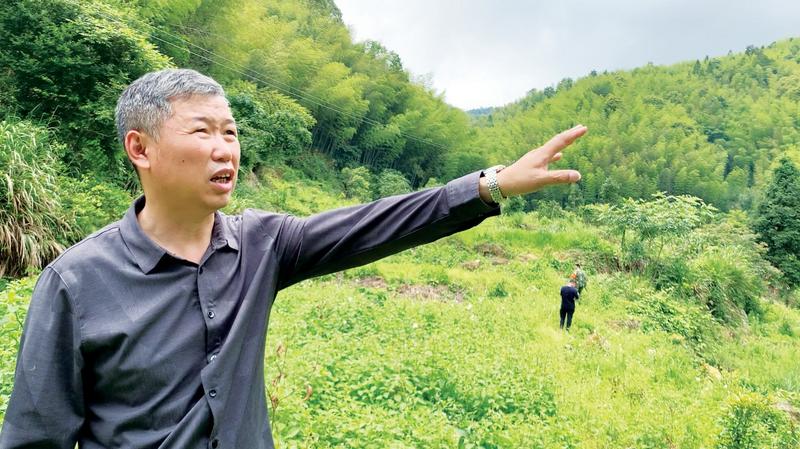 In Guangdong, local authorities have also taken tough action against pollution in the Dongjiang basin. At the provincial level alone, Guangdong has enacted 13 laws and regulations to protect the river. Most importantly, Jiangxi and Guangdong set up an ecological compensation mechanism in 2016, leading in the nation’s efforts in this respect. According to the first-phase treaty from 2016 to 2018, Ganzhou received subsidies from Jiangxi and Guangdong, as well as the central government, of up to 1.5 billion yuan (US$232 million) after meeting the ecological-protection requirements. The second-phase treaty, from 2019 to 2021, was signed early last year.

According to Zhong Shanbin, a village cadre in Xunwu, the county’s sewage treatment and garbage classification systems have reached the level of a city. The local government also helped residents grow cash crops that would cause less soil erosion.

Wen said he is happy to see more governmental-level collaboration to protect the Dongjiang River as it could better coordinate the various parties concerned and unleash their potential.

Besides environmental protection, he hopes there will be greater cooperation between the upstream and downstream in areas like education and investment. In his view, the bond was created by the collective responsibility of protecting the river, and it can be stronger, with deeper and wider collaboration.

Before the Dongjiangyuan village was relocated, Wen came to the village and took photos for every household. After the relocation, Lo and other volunteers also visited the residents’ new home at town.

Wen also set up his own non-governmental organization in Guangzhou, continuing to focus on protecting the river. He held photo exhibitions showcasing the conservation work, local culture and customs in Dongjiangyuan village. The exhibition was held in Xunwu, Guangzhou and Hong Kong.

Time is like a river. You can’t touch the same water twice because the flow that has already passed will never pass again. People come and go to Wen’s exhibitions. But those moments in film are here to stay, thanks to the efforts of people at the source.