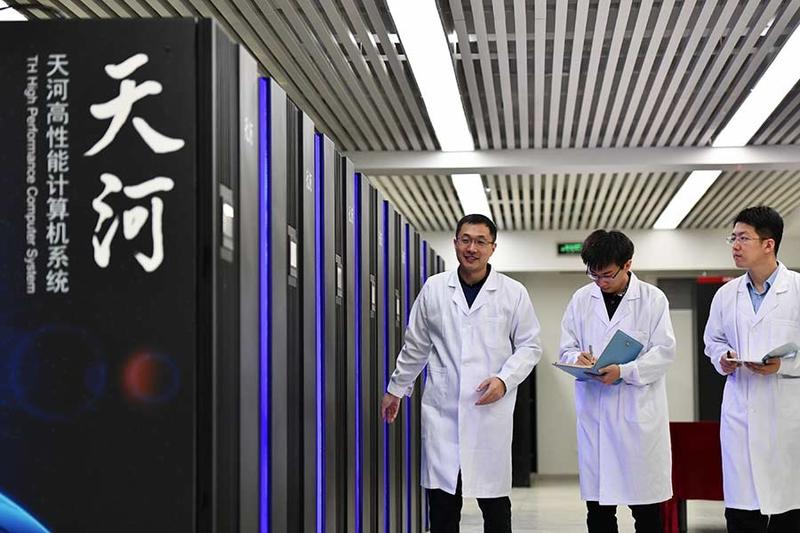 Scientists check the condition of the Tianhe-3 supercomputer at the National Supercomputer Center in Tianjin. (PHOTO/XINHUA)

China's technological research capabilities have seen steady growth from 2014 to 2019, characterized by contributing to 12,284, or 4.5 percent, of the global total number of "triadic patents" within the period, according to a report published on Friday.

Triadic patents are highly valuable intellectual properties that are recognized concurrently by patent systems in the United States, Europe and Japan. Due to the rigorous and expensive patent application process for these three systems, triadic patents are considered a key indicator of a nation's technological prestige and prowess in the world.

Triadic patents are highly valuable intellectual properties that are recognized concurrently by patent systems in the United States, Europe and Japan

From 2014 to 2019, China ranked fourth in the world in terms of the total number of triadic patents, with communication and information technology being the nation's most technologically advantageous field, according to the 2021 Mapping Technology Structure report issued by the Institutes of Science and Development of the Chinese Academy of Sciences.

However, compared with other technological powerhouses such as Japan, the US and Germany, China is noticeably behind both in the diversity and total number of triadic patents. For instance, Japan held 91,618 such patents from 2014 to 2019, followed by the US with 71,658 and Germany with 20,793.

In terms of patent diversity, patents from Japan and the US made up nearly 95 percent of the 7,375 technological fields examined, covering 7,020 and 6,989 topics, respectively. They were followed by Germany, South Korea and France.

China ranked sixth in the world with 3,712 fields, and still needs to increase its number of triadic patents in chemistry and materials science, scientific fields in which China is traditionally strong, the report said.

Pan Jiaofeng, the president of the institutes, said the purpose of the report is to objectively and thoroughly describe the current global technological landscape, enabling experts and policymakers to intuitively observe the development trend of frontier technologies and allow science and technology to better serve the economy.

Wang Xiaomei, a researcher from the institutes and one of the key authors of the report, said creating high-quality patents is one of the major challenges for China's science and technology development.

Another major takeaway from the report is that China is the only country among the world's top six holders of triadic patents that is still experiencing relatively fast growth in this field, she said.

According to the World Intellectual Property Organization, in 2019, China applied for 1.4 million patents, nearly 780,000 more than the second-placed US. Japan applied for 310,000, South Korea at 220,000 and European countries at 180,000, taking third to fifth place respectively.

However, Wang said medical technologies, biomaterials, machine tools and engine design are technological fields featuring high-quality patents in which China needs considerable improvement to catch up with other major economies.