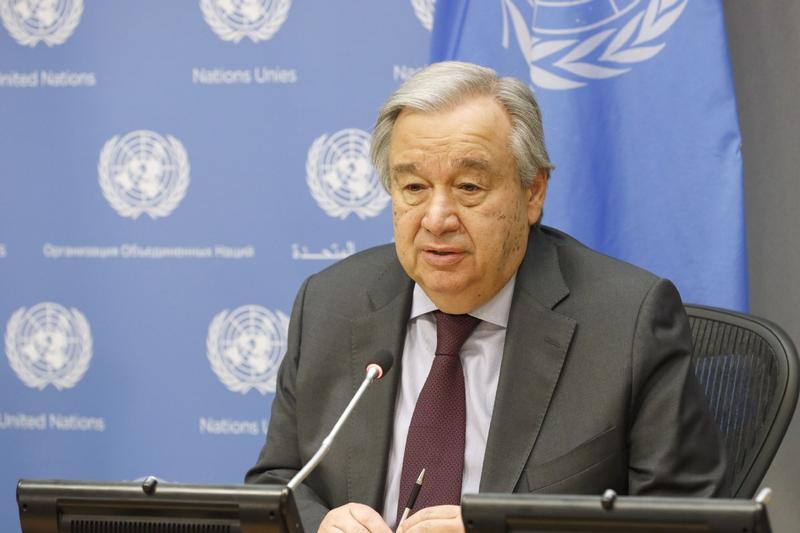 UNITED NATIONS - United Nations Secretary-General Antonio Guterres on Monday said that the cooperation between China and the United States is important and expressed the hope that big countries will commit to net zero emissions of greenhouse gases by the middle of this century.

"The China-US cooperation is vital. It was vital for the Paris Agreement. It remains vital today, together with other important partners," the secretary-general said at a press conference to launch the World Meteorological Organization's State of the Global Climate in 2020 Report when responding to a question regarding the joint statement issued Sunday by China and the United States on coping with climate change after talks in Shanghai.

The statement was issued after talks between Xie Zhenhua, China's special envoy for climate change affairs and US Special Presidential Envoy for Climate John Kerry from Thursday to Friday in Chinese city of Shanghai.

Replying to a question about his expectations for this week's virtual climate summit, the top UN official said, "My hope is that, in this week's summit, a number of countries, the most important countries in relation to climate change, will be able to commit to net zero emissions of greenhouse gases by the middle of the century and to commit to a drastic reduction of emissions for the next decade in the context of the review of their Nationally Determined Contributions. And this is very important in this summit."

US President Joe Biden on March 26 invited 40 world leaders to attend a virtual summit on climate change on April 22 and 23. Chinese and Russian leaders are invited to the summit, according to a White House statement.

According to the WMO report, the COVID-19-related economic slowdown failed to put a brake on climate change drivers and accelerating impacts.

The year 2020 was one of the three warmest years on record, with the global average temperature being about 1.2 degrees Celsius above the pre-industrial level, added the report, which was compiled by the WMO and an extensive network of partners.

Concentrations of the major greenhouse gases continued to increase in 2019 and 2020, the report noted.

The economic slowdown, as a result of the global COVID-19 pandemic, temporarily depressed new greenhouse gas emissions, but had no discernible impact on atmospheric concentrations, the report quoted UN Environment Program as saying.

ALSO READ: Chinese, US climate envoys to meet in Shanghai

The global mean sea level continued to increase in 2020 and at a higher rate recently, partly due to the increased melting of the ice sheets in Greenland and Antarctica. Ocean acidification and deoxygenation have continued, impacting ecosystems, marine life and fisheries.

The increasing climate-related disasters, such as floods, droughts and storms, combined with the COVID-19 pandemic in 2020 in a double hit to more than 50 million people, the report said, quoting data from the International Federation of Red Cross and Red Crescent Societies.

Driven by conflict and economic slowdown as well as climate variability and extreme weather events, food insecurity, after decades of decline, is now increasing.

According to UN Food and Agriculture Organization and UN World Food Program, the number of people classified under crisis, emergency and famine conditions had increased to almost 135 million people across 55 countries in 2019.

"This report shows that we have no time to waste. The climate is changing, and the impacts are already too costly for people and the planet," Guterres said.

READ MORE: China ready to boost climate cooperation with US, others

"This is the year for action. Countries need to commit to net zero emissions by 2050. ... And they need to act now to protect people against the disastrous effects of climate change," he added.