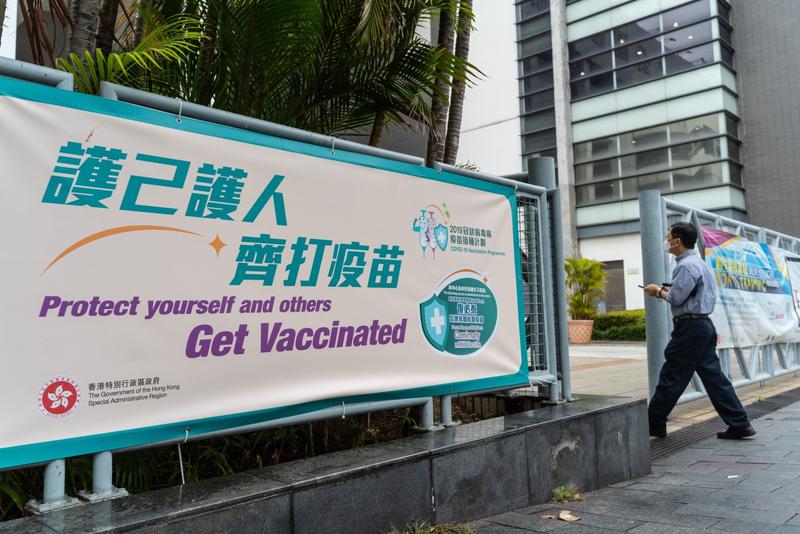 HONG KONG - Hong Kong expanded eligibility for COVID-19 vaccines to all residents aged 16 and older, in the government’s latest attempt to boost the city's inoculation rate by making the shots widely accessible.

Residents aged 16 and above will be allowed to receive BioNTech SE vaccines, while those older than 18 will also be able to opt for shots made by the Chinese mainland’s Sinovac Biotech Ltd, Secretary for Civil Service Patrick Nip Tak-kuen said at a briefing on Thursday. Bookings for the expanded group will start on April 23, Nip said, and 16 and 17-year-olds will need parental consent forms to be vaccinated.

Residents aged 16 and above will be allowed to receive BioNTech SE vaccines, while those older than 18 will also be able to opt for shots made by the Chinese mainland’s Sinovac Biotech Ltd, Secretary for Civil Service Patrick Nip said

BioNTech vaccinations will only last until the end of September due to supply, Nip said, and appointments for the first dose must be made by August. He urged citizens to get inoculated as soon as possible.

No third vaccine is expected in the city this year, said Food and Health Secretary Sophia Chan Siu-chee.

The expansion means that the Hong Kong Special Administrative Region’s entire adult population will now be eligible to receive vaccines, making it one of the first places globally to offer eligibility to its full adult population.

“We have the capacity to expand the coverage of the vaccination scheme,” Nip said. “It’s the appropriate time to introduce this arrangement.”

About 951,000 total vaccine doses had been administered to the Hong Kong public as of Wednesday, with at least one dose given to just 8.4 percent of the population.

The expansion comes days after the city outlined “vaccine bubbles” that would impose fewer social curbs on vaccinated people. Chief Executive Carrie Lam Cheng Yuet-ngor has also said the government was planning to only allow those who’ve had COVID-19 shots to fly from the city to Singapore once both governments finalize a travel bubble.

The HKSAR has been expanding vaccine access rapidly since its rollout started in late February. Healthy adults aged 30 and up, domestic helpers and students aged 16 and above who study at overseas institutions were made eligible in March.

The city is currently administering vaccines made by Sinovac and Mainz, Germany-based BioNTech, after the latter was temporarily halted last month following packaging defects found in some vials. The BioNTech program was resumed after authorities concluded that the defects didn’t pose a safety risk.

The four imported cases on Thursday involved a 43-year-old woman from the Philippines, a 31-year-old man from France, a 39-year-old man from Italy and a 4-month-old baby from India, Ambrose Wong, senior medical and health officer of the Centre for Health Protection’s communicable disease branch, said at a briefing.

The two cases involved a couple - a 29-year-old woman whose infection source was unknown and her 38-year-old husband - while five of their family members were among the more than 10 people who tested preliminarily positive as of Thursday afternoon.

The woman, who lived with her husband and parents at Meadowlands Block 19 in Hung Shui Kiu, was an accounting manager at Quality HealthCare in Kowloon Bay and last went to work on Monday. She first developed symptoms on April 9. Her parents tested positive, while about 20 of her colleagues would be quarantined.

During the incubation period, she joined gatherings with family members and friends at their homes and different restaurants across the city, Wong said, adding that contact tracing was under way.

Her husband, who developed symptoms and last went to work on Sunday, is a real estate agent at Cheong Shing Property in Quarry Bay.

Over the past two weeks, the city has seen 145 new infections, including 30 local ones, eight of which were untraceable.