LIVERPOOL, England - Real Madrid moved into the semi-finals of the Champions League after their makeshift defence held on for 0-0 second-leg draw with Liverpool at Anfield on Wednesday to complete a 3-1 aggregate win.

The Spanish side will face Chelsea in the last four as they search for their fifth Champions League title in eight years.

Liverpool, the 2019 Champions League winners, created enough chances in the opening 45 minutes to have turned the tie around but they ran out of ideas in the second half.

Juergen Klopp had hoped that a disappointing Premier League campaign could be compensated for with some end of season European excitement but his side still look well short of the thrills they produced in the past two seasons.

“You always need the key moments. We didn’t lose the tie tonight, we lost in Madrid. We didn’t score and then the experience of Real Madrid played the tie out,” said Klopp.

“We love this competition and for other reasons it is very important we are back in it. We can now concentrate on the Premier League and we will.”

With no crowd at Anfield, this was never going to be a dramatic and emotional night like the memorable comeback victory over Barcelona two years ago but Klopp will surely feel that a chance of progress was missed against a weakened Real without skipper Sergio Ramos and his central defensive partner Raphael Varane.

Liverpool came out with intent and aggression and soon had Real on the back foot. Sadio Mane fed Mohamed Salah for an early chance but the Egyptian shot straight at Thibaut Courtois, who saved with his legs.

Klopp had clearly targeted Real’s stand-in right-back Federico Valverde as a potential weak spot and the Uruguayan struggled to cope with Mane in the opening stages.

A flowing attacking move, reminiscent of Liverpool at their best, ended with a curling shot from James Milner which Courtois did well to tip wide. 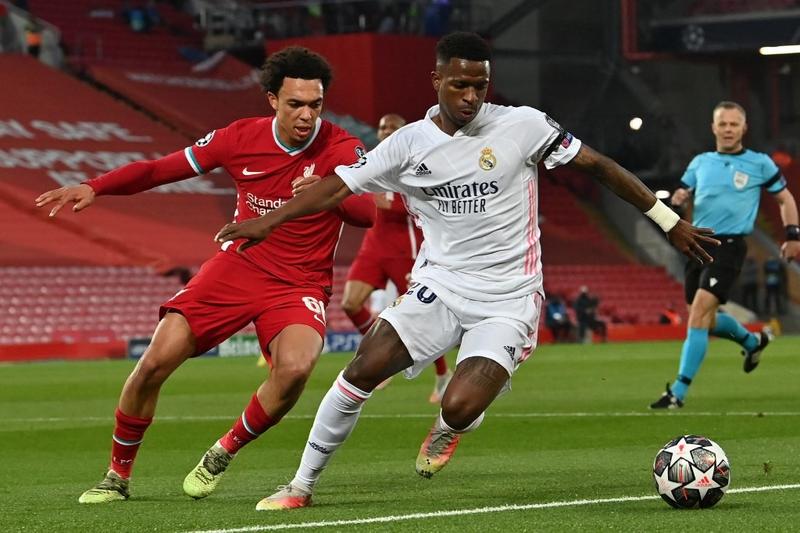 But Liverpool had their own defensive vulnerabilities exposed in the 20th minute when Nathaniel Phillips was robbed by Karim Benzema and the Frenchman weaved his way into the box before his deflected shot struck the post.

Salah then had another opening but scooped his shot, from a promising position, high and wide and then the best chance of the half fell to Georginio Wijnaldum - after good work from Trent Alexender-Arnold, the Dutchman leaned back and put his shot well over the bar.

The home pressure continued after the break with Roberto Firmino testing Courtois at the near post with a fine shot on the turn.

Klopp threw on Diogo Jota and Thiago Alcantara on the hour in search of the breakthrough but it so nearly came at the other end - Alisson Becker doing well to race off his line to foil Vinicius Jr and then smother Benzema’s follow-up.

Real were in no mood to cave in and Liverpool did not have the inspiration needed to open them up and while their display was creditable, they could not do enough to make up for their defensive errors in the first leg loss.

Neither of these sides were at their peak in these two-legs, both showing the effects of injuries and the tough schedule this season, but it is the 13-times European champions who deservedly progressed.

Klopp has been without Virgil van Dijk throughout this campaign and he will not miss the irony in losing out to a team also missing their top defenders.

“We had some huge absences, Ramos and Varane are two pillars of this team,” said Real’s Brazilian midfielder Casemiro.

“But Nacho and (Eder) Militao showed they are good enough to play for us too, they keep proving they have what it takes to play for Real Madrid.

“We knew it was going to be difficult considering who we were playing, we know how hard it is to play here, but the team did a fantastic job and every player played their part.”