When it comes to buying and eating meat, Chinese have a clear preference for pork, favoring it over beef, mutton and fish.

However, few people pause to consider where their pork comes from, and even fewer are aware that to meet growing demand, the country imports boar semen and pigs for breeding.

Zhang Xiangdong, a middle-aged family man from Beijing with a 10-year-old daughter, often buys pork online to cook the traditional Chinese dish of stewed pork with brown sauce at home.

According to the United States Department of Agriculture, in 2019, global pork consumption reached 100 million metric tons, with China taking some 49 percent of this total

"Pork prices have risen, especially last year during the pandemic. I sometimes hesitate when buying organic pork, which costs more, but I have never thought about where the meat is sourced," he said.

Some 90 percent of the pork on dining tables in China has overseas origins.

On March 14, a chartered plane carrying 985 such animals arrived in Chengdu, Sichuan province.

According to Sichuan Daily, the pigs were the first shipment of a record number of 2,400 breeding pigs imported from the United States by a livestock company owned by Chinese agribusiness giant Zhengbang Group.

The arrivals are undergoing a 45-day quarantine and are expected to produce another 20,000 breeding pigs and 650,000 pigs for sale annually in the province.

China, the world's biggest pork producer and consumer, has imported pork and pigs for years to meet domestic demand.

According to the United States Department of Agriculture, in 2019, global pork consumption reached 100 million metric tons, with China taking some 49 percent of this total.

However, due to the onset of African swine fever in 2019 and the pandemic last year, pork consumption in China has fallen, in tandem with rising prices.

From a long-term perspective, demand for pork in China will continue to rise, as people will eat more of it amid rapid urbanization.

Shi Yan, founder of the Shared Harvest Organic Farm in Beijing, who is a specialist on agricultural and rural development, said, "Domestic pig production has been affected because of some import obstacles, which have caused pork prices to rise.

"From a long-term perspective, demand for pork in China will continue to rise, as people will eat more of it amid rapid urbanization."

According to online source The Pig Site, China imported a record 27,000 pigs last year to help restock its breeding farms with high-quality animals. The previous record was 17,300 in 2013.

The country mainly imports these pigs from Denmark, the US, Canada and the United Kingdom.

With such imports rising, the industry in China faces challenges resulting from a shortage of capital, a long profit cycle and technological problems. 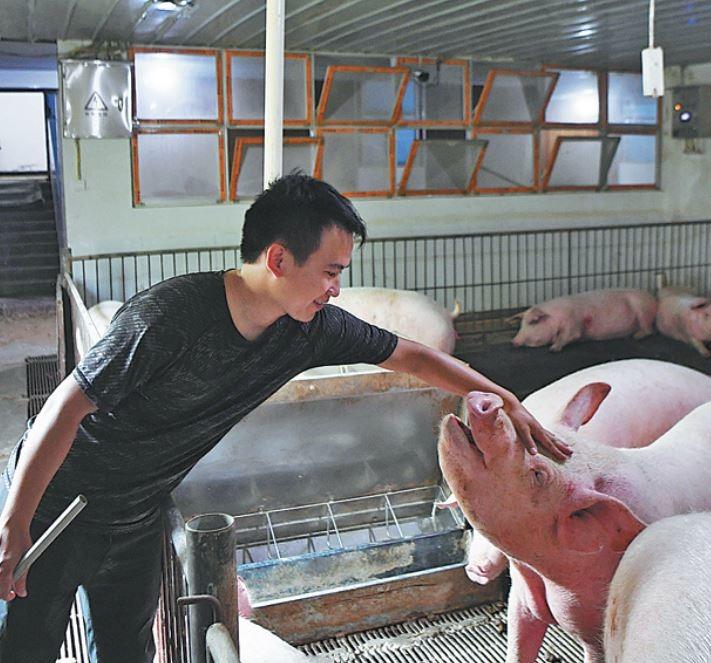 In this undated photo, a breeder checks on the animals at a pig farm in Chongqing. (PHOTO / XINHUA)

According to the latest national animal and poultry genetic resources list published last year, China is now home to 83 breeds of pig.

The nation used to have more breeds, but many have become extinct and 25 species are now endangered.

Liu Yonghao, chairman of New Hope Group, one of the country's biggest pork breeders, said problems being experienced include an incomplete industrial chain, outdated technology and the threat of disease.

Experts and company heads have suggested that China needs to grasp the core technologies required for breeding pigs and strengthen the development of animals bred locally, reducing reliance on imports.

Wu Zhenfang, director of the National Engineering Research Center for Breeding Swine Industry, said local pig breeds should be protected regardless of whether they are popular on the market, as each breed has its own advantages.

Pork from many local breeds tastes better, which can be a selling point. Domestic companies should farm more local pigs by using hybridization techniques to produce a higher percentage of lean meat.

South Village Paper, owned by Nanfang Daily Media Group in Guangzhou, capital of Guangdong province, quoted Wu, who is also a professor of animal science specializing in molecular genetics and breeding at South China Agricultural University, as saying that regional pig breeds should be protected for their biological diversity and genetic resources.

"Pork from many local breeds tastes better, which can be a selling point. Domestic companies should farm more local pigs by using hybridization techniques to produce a higher percentage of lean meat," he said.

"Local pork should be developed in an attempt to gain increased market share and meet growing demand."

Although China has imported more breeding pigs in recent years, this has not always been the case.

Wu said an average of about 6,000 such animals were imported each year from 2015 to 2018 before African swine fever emerged in the country. He added that this figure was not that high, considering that the country slaughtered 600 million pigs annually.

"In recent years, many Chinese pig farming companies have increased imports of breeding animals for several reasons," he said.

"They are seeking to improve local breeds by introducing new foreign ones, which can enrich genetic diversity. At the same time, they can promote their brands by stating that the pork comes from high-quality foreign pigs. This is a good marketing strategy."

As pig prices soared, new breeding companies and those that developed too quickly faced a shortage of animals, and the quickest way to obtain high-quality pigs for reproduction purposes was to buy from the home and overseas markets, Wu said.

Domestic pig breeding companies need to be aware that there is a gap between themselves and their foreign counterparts regarding the level of technology being used, Wu added.

"In European countries and the US, pig farming has a mature industrial chain. Upstream companies are responsible for technology research and development to cultivate high-quality breeds. Downstream companies, which focus on pig reproduction, must pay a fee to those upstream when they need pigs for breeding," he said.

Chinese pig farming companies are mainly involved in breed selection and reproduction, but lack incentive to cultivate new breeds, according to Wu.

He suggested that the government increase investment in pig breeding technology to encourage innovation among companies. 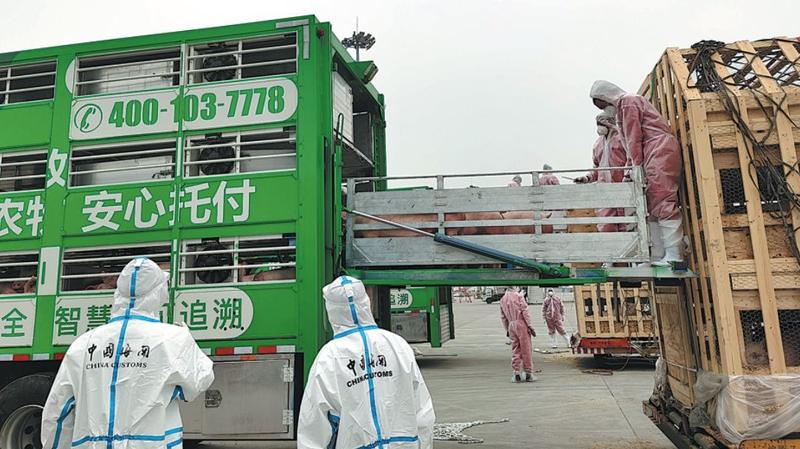 In this undated photo, customs officers wait to quarantine 985 breeding pigs from the United States at Shuangliu Airport in Chengdu, Sichuan. (PHOTO PROVIDED TO CHINA DAILY)

Action on the way

With the central government placing more emphasis on food safety and sustainable agriculture, local authorities and companies have taken steps to overcome their difficulties.

In Beijing, the authorities published a document in November 2019, pledging support for the pig farming industry, along with investment of 850 million yuan over three years to upgrade the city's pig farms.

Pinggu district, in the northeast of the capital, started to allocate land for the pig farming industry in 2019. Local authorities said departments such as agriculture, water affairs, greening, and land planning are working together to launch pig farming projects.

In April last year, work began in the district on a 183,000-square-meter production base for breeding pigs, with total investment of 247 million yuan. The base was put into operation in December.

With the central government placing more emphasis on food safety and sustainable agriculture, local authorities and companies have taken steps to overcome their difficulties

With an annual output of 60,000 pigs, the base has adopted a low-carbon model for the research and development of new breeding animals, with help from several agricultural science institutions.

The initial construction phase for a smart pig farm owned by New Hope Group was recently completed in Pinggu. The farm will occupy 140,000 square meters and have an annual production capacity of 120,000 pigs－the largest in Beijing.

Construction of the second phase is due to be completed in the second half of this year and the farm is expected to have an annual output of 120,000 commercial pigs.

Liu, the New Hope Group chairman, said the farm is equipped with temperature-checking robots and systems for automatic feeding and disinfection.

"Disinfection increases safety for the pigs and helps to avoid outbreaks of African swine fever. The advanced equipment points the way forward for the smart agricultural industry," he said.

In exploring new technology and smart facilities to raise the quality and output of pigs this year, the company will focus on village development and breeding the animals, Liu added.

In early February, he suggested that China should introduce policies to subsidize companies that have key pig breeding projects.

"The country needs to encourage these companies to take part in pig breeding research and related international cooperation," Liu said.

In Guangdong province, the authorities published a document recently, stating that they would step up protection of genetic animal and poultry resources, especially lean breeds of pigs.

In 2018, a 50 million yuan project was launched in Guangdong to protect local livestock and poultry. The project is expected to be completed in June.

In Hubei province, the country's first high-end pig breeding demonstration farm has been established. It will use clone technology to safeguard endangered breeds in certain areas.

Although the central government and companies have been working to ensure that the pig farming industry meets domestic demand, there have been suggestions that other improvements may be needed.

"In some developed cities, people are eating a lot of pork in their diets," she said. "We advocate less chemical fertilizer and less waste."