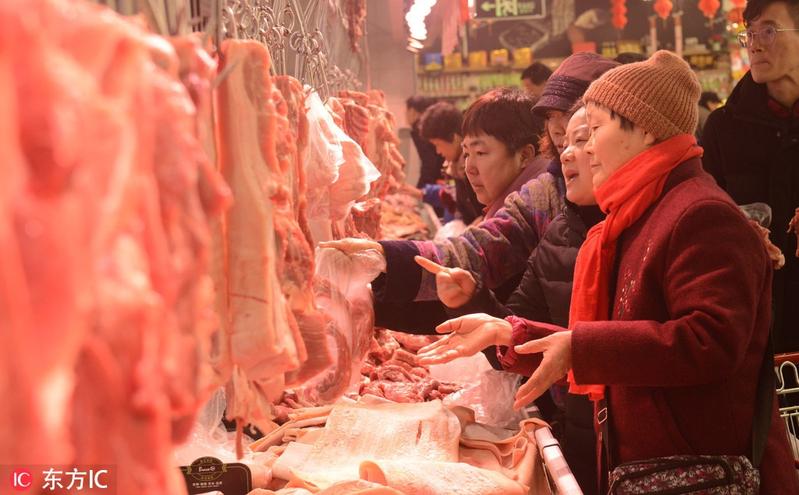 Agricultural authorities will redouble efforts to boost the production of pork, which has already shown signs of recovery following a slump caused by African swine fever, an agriculture vice-minister said on Monday.

The stock of hogs increased by 2 percent in November over the previous month, while the stock of breeding sows saw a month-on-month increase of 4 percent, marking the first time since April last year that both stocks had increased, Yu Kangzhen, vice-minister of agriculture and rural affairs, said.

With a narrowing of the gap between supply and demand, pork prices began falling across China early last month, figures released by the ministry showed

With a narrowing of the gap between supply and demand, pork prices began falling across China early last month, figures released by the ministry showed.

The average price for wholesale pork in China was about 43 yuan (US$6.20) a kilogram on Friday, a fall of more than 18 percent from the peak level on Nov 1, according to the ministry.

"It is a very good sign, and we will further the momentum to ensure a stable supply of pork in the market during the New Year's Day holiday and the Spring Festival holiday," Yu said, adding that a range of measures to encourage pig farmers to replenish stocks since September and high pork prices were behind the recent increase in stocks.

Authorities at various levels have made full preparations to ensure an adequate supply of pork during the two holidays, including a significant rise in the quantity of reserve meat to be released to the market, he said.

READ MORE: Tariffs cut on some imports, including pork

As a result, the number of hogs in stock in Chengdu stopped falling and started to rise in October, and has kept increasing since. More than 4 million hogs will be available on the market in Chengdu next year, Niu predicts.

Yu said promoting hog production will be an important task for the ministry and ordered local agricultural authorities to learn from the ministry to set up special offices for promoting pork production.

ALSO READ: Pork shortages set to ease by next year

The ministry will also improve guidance to ensure measures previously released by it and other central government departments can be carried out effectively across China, such as allowing the raising of pigs in multistory facilities, and streamlining environmental evaluation procedures for pig farmers to ensure the replenishment of stock, Yu said.

The ministry will improve technical services for pig farmers to help them expand production, and will try to link restoration of pig production with poverty alleviation efforts, so impoverished farmers in rural areas can climb out of poverty through raising pigs in cooperation with major pig breeding companies, he said.

Pork production in China has been seriously affected by African swine fever outbreaks since August last year, with experts estimating pork production declined at least 20 percent year-on-year this year. Pork production is expected to keep recovering next year and rebound close to normal levels before the end of next year, the ministry said.