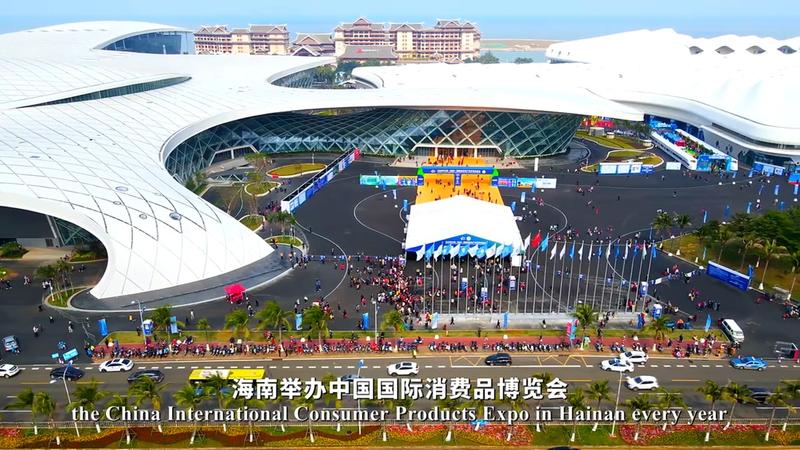 The first China International Consumer Products Expo is scheduled to be held in Haikou, the capital of Hainan province, from May 7 to 10. (PHOTO / CICPE)

The first China International Consumer Products Expo will provide an opportunity for the display and sale of global consumer goods in the Chinese market and boost the sales of both domestic and foreign companies across the world, government officials said on Wednesday.

They spoke after the nation announced that it will hold the first such expo in Haikou, the capital of Hainan province, from May 7 to 10.

The expo will have a total exhibition area of 80,000 square meters and feature fashion, jewelry, food and supplements, hospitality and professional services. It is expected to be the largest consumer products exposition in the Asia-Pacific region, according to organizers.

The event is seen as an important initiative to better meet people's needs and a significant platform to foster a new development paradigm. It will be co-hosted by the Ministry of Commerce and the Hainan provincial government, said Wang Bingnan, vice-minister of commerce.

China, considered the world's most promising consumer market, will remain committed to its basic national policy of opening-up and will hold events such as the expo in Haikou, which will become platforms for international exchanges and cooperation, he said.

The convening of the consumer products expo is an important move following the instruction of Xi Jinping, general secretary of the Communist Party of China Central Committee, to facilitate comprehensive reform and opening-up in Hainan, said Shen Danyang, executive vice-governor of Hainan.

The event will be the first international expo in the province since China released a master plan in June to build Hainan into a globally influential, high-level free trade port by the middle of the century.

Shen said the expo will focus on "high-tech, new, high-quality and featured" consumer products. It will strive to become a top expo in China in terms of international influence, the value of exhibits per unit area and the number of first launches and exhibitions.

The expo's international exhibition area will cover 60,000 square meters, accounting for 75 percent of the total venue area. A total of 630 overseas exhibitors and 1,165 global brands from 69 countries and regions have signed up for the event, with Switzerland serving as guest country of honor.

Well-known brands－including Swatch from Switzerland, Swarovski from Austria, Panasonic and Shiseido from Japan, and Dell, Tesla and Coach from the United States－have confirmed their participation.

Yann Bozec, president of Asia Pacific at Tapestry Group, said brands including Coach and Kate Spade will showcase their latest collections and deliver a seamless and digital "store-to-booth" experience in the company's 300-square-meter space at the expo.

"China is a vital driving force for global development and prosperity," Bozec said. Its great potential and the passion of its consumer market inspires global brands to keep innovating and investing in the country, he added.

Mark Edwards, general manager for China operations at Diageo, a London-headquartered spirits producer, said the Chinese market offers a significant consumer and commercial opportunity for the company. It will showcase its products, from Scotch to liquor, at its booth.

"We see this as an exciting opportunity to build awareness among Chinese consumers of our brands and build upon the growing interest in the international spirits category across China," he added.

The expo's domestic exhibition area is 20,000 sq m, with over 800 domestic participants, such as Huawei Technologies Co, Oppo and Vivo.

The upcoming consumer products expo, together with the China Import and Export Fair (known as the Canton Fair) and the China International Import Expo signal the nation's steady economic recovery and long-term upward momentum as the pandemic has been effectively curbed and controlled in China, said Zhang Yongjun, a researcher at the Beijing-based China Center for International Economic Exchanges.