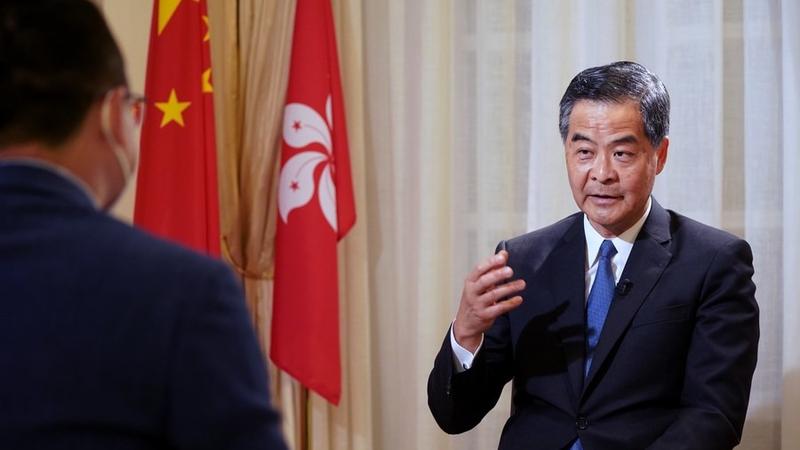 A draft decision on improving the HKSAR electoral system was submitted on Friday to the National People's Congress for deliberation at the top legislature's annual session.

Leung, who served as the chief executive of the HKSAR from 2012 to 2017, made the remarks while attending a group discussion during the annual session of the CPPCC National Committee, or the top political advisory body.

Leung called on national political advisors from Hong Kong to take a firm stand and resolutely safeguard the overall interests of the state and the fundamental interests of Hong Kong.

Efforts should be made to dispel misconceptions and further unite the people who love the country and Hong Kong, Leung said.

Hong Kong's business sector has also highlighted the significance and urgency of improving the electoral system of the HKSAR and implementing the principle of "patriots administering Hong Kong."

They said improving the electoral system and implementing "patriots administering Hong Kong" is a must to ensure the steady and sustained implementation of "one country, two systems," Hong Kong's long-term prosperity and stability, and people's wellbeing.

The Chinese General Chamber of Commerce of Hong Kong vowed to fully support the draft decision of the NPC and stressed improving the electoral system will guarantee Hong Kong's prosperity and stability and promote the development of Hong Kong's democratic system.

If those not genuinely willing to serve Hong Kong enter the power structure, the effective administration of the HKSAR government will be obstructed and the so-called "Hong Kong independence" will be incited, which will damage the law and order, people's livelihood and Hong Kong's international image, the Chinese Manufacturers' Association of Hong Kong said.

Allen Shi Lop-tak, president of the association, believed an improved electoral system of the HKSAR will reduce infighting and let Hong Kong refocus on economic development.

The Hong Kong Chinese Enterprises Association said the rioting and turbulence that occurred in the Hong Kong society reveals that the existing electoral system of the HKSAR has obvious loopholes and deficiencies, which the anti-China, destabilizing elements jumped on to take into their hands the power to administer the HKSAR.

Necessary measures must be taken to improve the electoral system and remove existing institutional risks to ensure the administration of Hong Kong by Hong Kong people with patriots as the main body, the association said.

Chairman of the Hong Kong Association of China Business Wong Ping said improving the electoral system is another significant move by the central authorities after the national security law in the HKSAR to safeguard Hong Kong's long-term prosperity and stability.

As violent incidents and the COVID-19 epidemic dealt blows to Hong Kong's businesses, an improved electoral system will help the Legislative Council resume normal operation and the government of the HKSAR carry out policies to improve people's livelihood, Lo Kam-yam, president of the Hong Kong Commerce and Industry Associations, said.

After that, businesses will have a sound business environment and residents can again lead a happy and stable life, he said.

Hong Kong businessman Ng Leung-ho, who is also a national political adviser, said that ensuring Hong Kong is administered by patriots is not only a requirement for the city to safeguard national interests, it will also boost its future development.

In a media interview in Beijing during the ongoing fourth session of the 13th CPPCC National Committee on Sunday, Ng said that Hong Kong's shift from chaos to order after the National Security Law's implementation showed that "patriots administering Hong Kong" is a key pre-condition of the smooth practice of "one country, two systems".

To implement the principle of “patriots governing Hong Kong”, Ng called for urgent improvement of Hong Kong's flawed electoral system, which he described as an institutional protection of the principle. He added that the principle should not only cover Hong Kong's administrative bodies, but also other fields key to Hong Kong's future, such as education.

Li Bingcun contributed to this report.