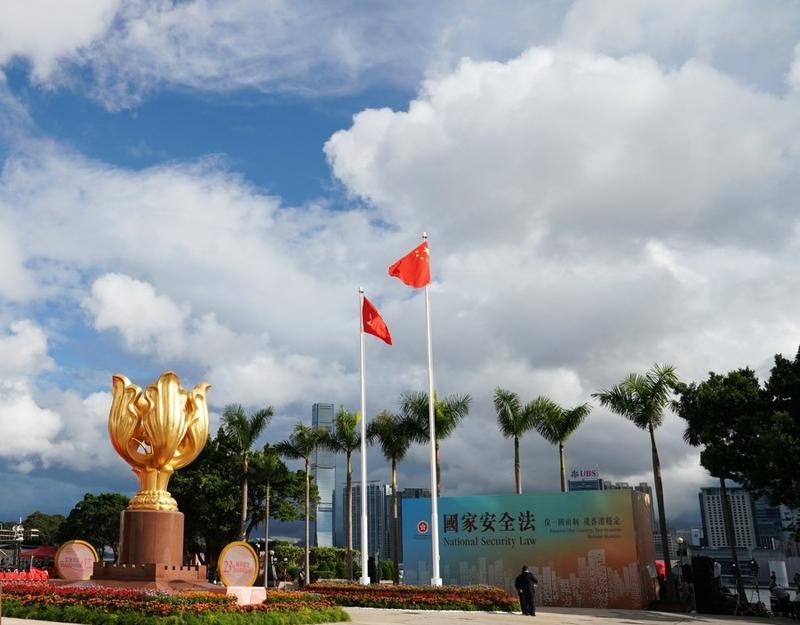 Photo taken on July 1, 2020 shows the Golden Bauhinia Square after a flag-raising ceremony held by the government of the Hong Kong Special Administrative Region in Hong Kong. (PHOTO/XINHUA)

There is nothing unusual in the proposed requirement that positions of authority in the Hong Kong Special Administrative Region only be occupied by patriots. Yet the move to initiate reform in the SAR's electoral system to ensure that is the case has undeniably ruffled the feathers of some politicians and media outlets in the West.

Their response to the proposed move to provide a firm guarantee for the implementation of the principle of "patriots governing Hong Kong", which was first mooted a few weeks ago, has been the same as it was when the National Security Law for Hong Kong was in the works.

Mired in either ideological bigotry or with an eye on geopolitics, some Western politicians and media outlets have been assailing Beijing and decrying the patriotism requirement as an erosion of Hong Kong's "freedoms" even before the legislative process began on Thursday

Mired in either ideological bigotry or with an eye on geopolitics, these Western politicians and media outlets have been assailing Beijing and decrying the patriotism requirement as an erosion of Hong Kong's "freedoms" even before the legislative process began on Thursday.

Their handwringing is because the reform will close the clear loopholes and shortcomings in the electoral system that have enabled anti-China forces to undermine the overall prosperity and stability of Hong Kong and jeopardize national sovereignty, security and development interests.

The reform of the electoral system of the SAR is set to put an end to Trojan horses, backed and instigated by external anti-China forces, infiltrating the SAR's governance structure, as the National People's Congress will deliberate on the establishment of a mechanism of qualification review throughout the entire process.

Whatever colonial hangover they may be suffering from, these Western politicians and media outlets cannot alter the reality that China has sovereignty of Hong Kong, and the central authorities have the constitutional power and responsibility to determine the governance system of the SAR.

Civilized societies function smoothly and keep themselves in good shape by requiring every member to strictly abide by some kind of social contract that includes the requirement for allegiance to it. For a nation, the patriotism of citizens, especially public office holders, is an inherent part of that contract.

The requirement for public office holders to be patriots and pledge allegiance to the running of the political system and the governance establishment continues this process and is a matter of course, rather than an option.

The disruptive forces that have infiltrated Hong Kong's governance system seek to spread ideas of so-called Hong Kong independence, resist the jurisdiction of the central authorities and obstruct the administration of the SAR government.

Since improving the electoral system will put an end to the attempts to obstruct and manipulate the SAR's governance system and so allow the authorities to focus on development and protect long-term prosperity and stability, people who profess to love Hong Kong should support the move.