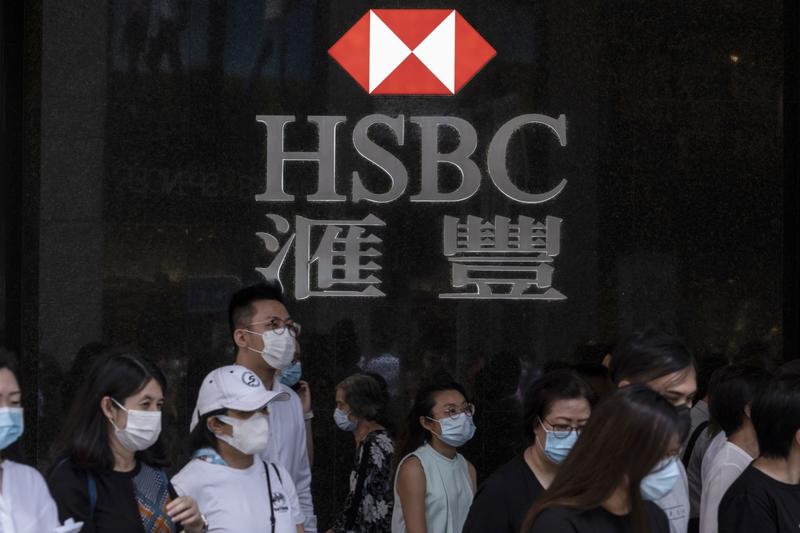 HSBC Holdings Plc is considering the return of some global leaders to the bank’s original hometown, reinforcing Asia’s role as its center of gravity.

A cadre of senior executives is set to relocate in coming months to the Hong Kong Special Administrative Region from HSBC’s Canary Wharf headquarters, say people familiar with the plans, as Europe’s biggest bank pares its global ambitions.

Chief Executive Officer Noel Quinn will begin marketing what’s known internally as the “pivot to Asia” on Tuesday when he announces 2020 earnings. Moving the trio -- Nuno Matos, chief executive of wealth and personal banking; Greg Guyett, co-head of global banking and markets, and Barry O’Byrne, chief executive of global commercial banking -- would mean businesses responsible in 2019 for 95 percent of net revenue will be run out of the HKSAR.

Chief Executive Officer Noel Quinn will begin marketing what’s known internally as the “pivot to Asia” on Tuesday when he announces 2020 earnings. Moving the trio -- Nuno Matos, chief executive of wealth and personal banking; Greg Guyett, co-head of global banking and markets, and Barry O’Byrne, chief executive of global commercial banking -- would mean businesses responsible in 2019 for 95 percent of net revenue will be run out of the HKSAR

The coming reset comes just 12 months after an overhaul that called for cutting 35,000 jobs, about 15 percent of the total, over three years. But Chairman Mark Tucker told the Asian Financial Forum conference in January that the pandemic has upended those plans. “Economic realities mean that what we were planning to do in February we need to be even more urgent in doing,” Tucker said.

HSBC will probably report pretax adjusted profits fell to US$11.7 billion in 2020, close to half of 2019, largely driven by soaring bad debt charges amid the pandemic, according to the average of 19 forecasts on the bank’s website. Its shares, which tumbled last year, have gained about 11 percent so far in 2021, though they have lagged rivals such as JPMorgan Chase & Co and Banco Santander SA.

“The potential at HSBC is from simplification, de-duplication, and increased digitization,” said Edward Firth, a banking analyst at Keefe, Bruyette & Woods. “That, to me, is the opportunity, rather more than any ‘pivot’ to Asia or some other such strategic reset.”

Cost-cutting aside, Quinn told top managers at an internal presentation this month that investment will focus on Asia, as well as the UK and the Middle East.

Seeking avenues for growth, Quinn said the bank wants to become a “market leader” in wealth management. It’s now a relative minnow in the business compared to some of its international peers. While HSBC’s private bank manages less than US$400 billion of client assets, UBS AG, the world’s largest wealth manager, looks after customer funds totaling about US$2.6 trillion.

Tucker told the Asia conference that there were “real opportunities to grow our wealth business and expand across South Asia.” Tucker said the Chinese mainland’s Greater Bay Area, the economic hub of more than 70 million people encompassing the HKSAR and several other southern cities, provides “substantial opportunities.”

HSBC’s private bank managed US$361 billion for its clients at the end of 2019, according to a June 2020 company presentation. However, the unit generated 1.8 percent of group adjusted prextax income in 2019, according to Bloomberg data. HSBC’s global asset management division managed a further $506 billion of assets at the end of last year, of which Asia represented about a third.

Founded in 1865 as the Hongkong and Shanghai Banking Corp, HSBC moved its base to London in 1993 after buying Midland Bank. Since then, its board has considered -- and rejected -- shifting its headquarters back, most recently in 2016.

For operations beyond Asia, the UK and the Middle East, the future looks cloudy at best.

In France, HSBC has spent more than a year attempting to sell its French retail unit. In the US, the bank has slashed its branch network and cut its New York-based investment bank, in particular its equities business.

“The answer from the bank will probably be an expanded strategic reset, which is likely to include even greater-than-expected cost reductions and retrenchments in developed markets to offset the revenue headwinds,” said Ian Gordon, bank analyst at Investec Securities.