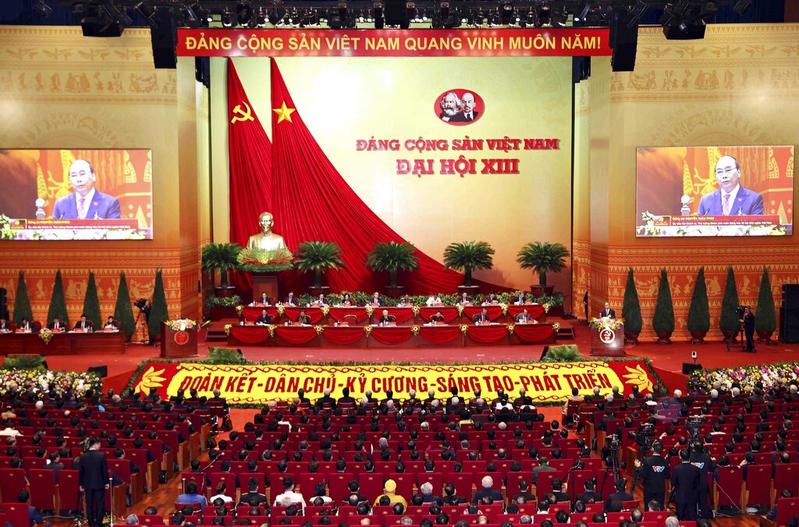 Delegates attend the opening of 13th National Congress of the Communist Party of Vietnam in Hanoi, Vietnam, Jan 26, 2021. (AN VAN DANG/VNA VIA AP)

HANOI - The opening ceremony of the 13th National Congress of the Communist Party of Vietnam (CPV) was held in Hanoi on Tuesday.

During the congress, delegates will review the party building work and the leadership of the 12th CPV Central Committee (CPVCC), before electing a new CPVCC for the 13th term.

They will also review the past 35 years of the country's reform cause, discuss the implementation of the 10-year socio-economic development strategy, and map out directions and tasks for national development from 2021 to 2025.

In his speech at the opening ceremony, member of the Politburo of the CPVCC and Vietnamese Prime Minister Nguyen Xuan Phuc said the congress takes place when Vietnam is facing many intertwined opportunities and challenges, as well as many new strategic issues that need to be resolved.

A record high of 1,587 delegates representing over 5.1 million CPV members attend the congress, which is scheduled to last until Feb 2

Cadres, party members and the people are placing a lot of expectations on the right decisions of the party to promote the combined strength of great national solidarity and the advantages of the times, build a socialist country with the rule of law in association with action against corruption and waste, and continue the rapid and sustainable development of the country, Phuc said.

Delivering a report to the congress, General Secretary of the CPVCC and Vietnamese President Nguyen Phu Trong stressed that the 13th CPV National Congress is "a major political event of special importance" in continuing to advance the country's reform, integration and development.

The congress will set specific goals and tasks to be completed in the country's future development phases, including becoming a modern industrialized country with upper-middle income by 2030, and a developed country with high income by 2045, Trong said.

On Monday, the congress held a preparatory session where attendees adopted the congress' agenda, working regulations, election rules and a report on delegates' eligibility. They also elected a 17-member presidium, a five-member secretarial delegation and the delegate eligibility verification board.

A record high of 1,587 delegates representing over 5.1 million CPV members attend the congress, which is scheduled to last till Feb 2.