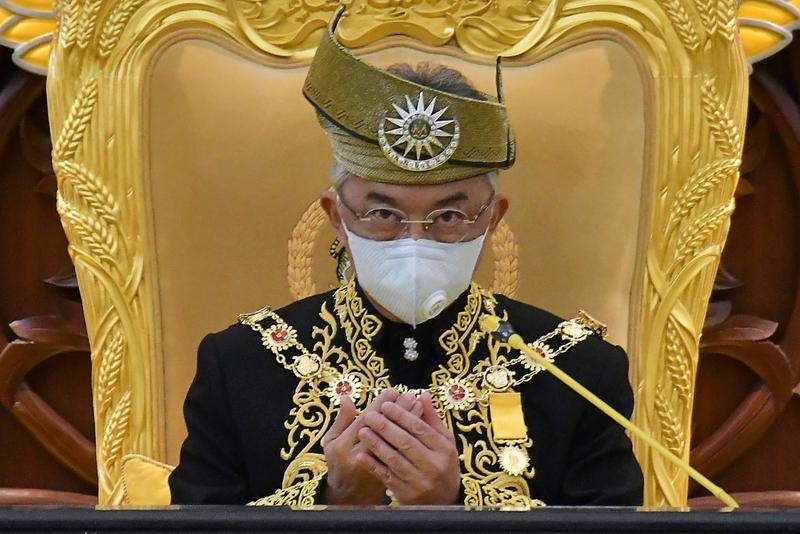 This handout photo from Malaysia's Department of Information taken and released on May 18, 2020 shows Malaysia's King Sultan Abdullah Sultan Ahmad Shah wearing a face mask as he offers prayers during the opening ceremony for the third term of the 14th parliamentary session in Kuala Lumpur. (PHOTO / AFP)

Malaysia’s king declared a nationwide state of emergency for the first time in more than half a century, suspending parliament in a move that allows embattled Prime Minister Muhyiddin Yassin to avoid facing an election until the pandemic is over.

The emergency decree gives Muhyiddin’s administration more power to tackle a surge in COVID-19 cases, including over the operations of private hospitals, and may allow the police and military to assist in public health measures. The ringgit and the country’s main stocks index declined after the announcement, which came a day after Muhyiddin imposed a two-week targeted lockdown in most of the country starting Wednesday.

The emergency decree gives Prime Minister Muhyiddin Yassin’s administration more power to tackle a surge in COVID-19 cases, including over the operations of private hospitals, and may allow the police and military to assist in public health measures

In a briefing on Tuesday, the prime minister said he may introduce measures like price controls to prevent economic sabotage. An independent committee would be established to advise the king on the duration of the emergency, which was set to expire on Aug 1 unless the outbreak abates sooner. Elections would be held as soon as an independent committee declares that the pandemic has subsided and it’s safe to hold a vote, Muhyiddin said.

“The emergency proclaimed by the Yang di-Pertuan Agong is not a military coup and curfew will not be enforced,” he said in a national address, referring to the monarch. “I emphasize that Malaysia is open for business. In facing these challenging times, this period of emergency will give us much needed calm and stability, as well as enable us to focus on economic recovery and regeneration.”

Opposition politicians criticized the move, blaming Muhyiddin for failing to contain a surge of COVID-19 cases in recent months and then using the pandemic as an excuse to stay in power. New infections hit a record high last week, and the tally stood at little over 2,000 on Monday. The government has forecast daily cases to reach 8,000 by late March or late May, based on a predictive modeling analysis.

“Policy flip-flops, double-standards and sheer incompetency” led to the surge in cases, according to Lim Guan Eng, secretary-general of the opposition Democratic Action Party, the largest in parliament. He said Muhyiddin’s government had failed to implement effective measures due to “endless politicking for survival.” 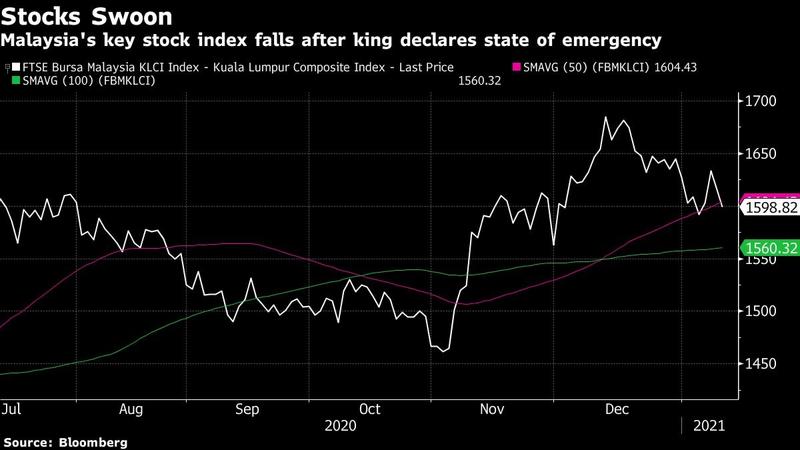 The ringgit fell as much as 0.6 percent to 4.0760 per dollar, the weakest since Dec 7, before paring the drop at the close. Malaysia’s main stock index closed 0.3 percent lower after falling as much as 1.6 percent initially, led by banks including CIMB Group Holdings Bhd.

Malaysia last saw a nationwide emergency in 1969, when race riots between ethnic Malays and Chinese led to the suspension of parliament for two years. The announcement of the emergency on Tuesday brought back memories of that “very traumatic period,” said Bridget Welsh, honorary research associate at the Asia Research Institute, University of Nottingham Malaysia.

“I see this as completely unnecessary from a COVID-19 perspective,” Welsh said. “It is a political move to hold on to political power.”

The emergency declared on Tuesday puts off any risk of an election for Muhyiddin, who has held a slim majority in parliament since taking power last year following the collapse of a previous coalition government. In October, the king rebuffed Muhiyddin’s attempt to place the entire country under emergency ahead of a major budget vote -- a test of confidence that he ended up passing.

Still, calls had risen in recent weeks for a fresh election. Some key members of the largest party in his ruling coalition, the United Malays National Organisation, had called for a snap poll by March.

An emergency “may serve as a ‘circuit breaker’ on the domestic political noises, but on the other hand, it could increase the perceived risk of foreign investors on Malaysia,” said Winson Phoon, head of fixed-income research at Maybank Kim Eng Securities.

Following the imposition of a new lockdown, Fitch Solutions cut Malaysia’s 2021 real gross domestic product forecast to 10 percent from 11.5 percent earlier. The restrictions announced Monday will likely last longer than the initial two-week period, it said in a report, adding the previous lockdown that ended in June lasted close to a quarter and was implemented after a far milder outbreak than the current wave.

The palace statement called the emergency “a proactive measure to contain the COVID-19 pandemic.” Muhyiddin said flooding in a number of states also contributed to the need for increased powers in addition to the virus.