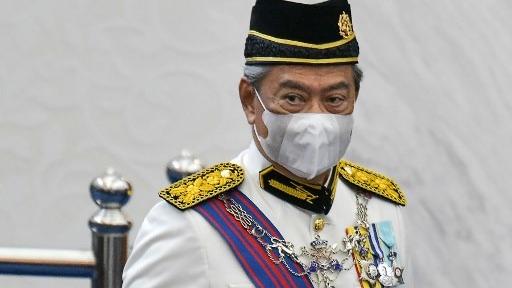 This May 18, 2020 file photo from Malaysia's Department of Information shows Malaysia's Prime Minister Muhyiddin Yassin wearing a face mask during the opening ceremony of the third term of the 14th parliamentary session in Kuala Lumpur.(NAZRI RAPAAI / MALAYSIA'S DEPARTMENT OF INFORMATION / AFP)

Malaysian Prime Minister Muhyiddin Yassin called on members of the ruling coalition to strengthen cooperation ahead of a general election he intends to hold once the virus pandemic subsides.

The premier acknowledged the tense ties between his Bersatu party and rival turned key ally United Malays National Organization, which controls the most parliament seats in his coalition. Steps must be taken to ensure that candidates from parties within the alliance don’t compete against each other in the same constituencies in the next polls, he said in a speech at Bersatu’s annual general meeting on Saturday.

The premier acknowledged the tense ties between his Bersatu party and rival turned key ally United Malays National Organization, which controls the most parliament seats in his coalition

“In the last general election, we fought against each other so there may still be open wounds, scars that remain,” Muhyiddin said. Regardless, there is a need to cooperate even though it’s a “difficult and challenging situation,” he said.

Malaysia has gone through political upheaval this year as various factions jockey for power after former Prime Minister Mahathir Mohamad abruptly stepped down in February. Muhyiddin emerged as the head of an unwieldy bloc with a majority of only a few lawmakers, prompting repeated concerns about the strength and durability of the government.

Muhyiddin said he plans to find ways to boost ties between ruling parties at various levels starting from the grassroots. He also proposed party leaders meet more frequently to discuss government policy, given that not all of them are part of his cabinet.

The proposals comes amid lingering discontent from UMNO, which last month threatened to pull out of the coalition because of what it claims is a power imbalance in the government. UMNO holds fewer posts in the cabinet compared to Muhyiddin’s party, despite having the largest parliamentary representation in the ruling bloc.

The embattled prime minister was given a reprieve last week when his 2021 budget passed through parliament. The government had made changes to the spending plan to appease allies and opposition lawmakers alike after they threatened not to support it. The budget’s defeat would have amounted to a loss of confidence against Muhyiddin.

“Some are of the opinion that the 2021 budget should be rejected so that a general election could be held,” Muhyiddin said. “That’s not necessary.”

“God willing, when the COVID-19 pandemic is over, we will hold a general election,” he said. “We will return the mandate to the people, and allow the people to decide which government they want.”