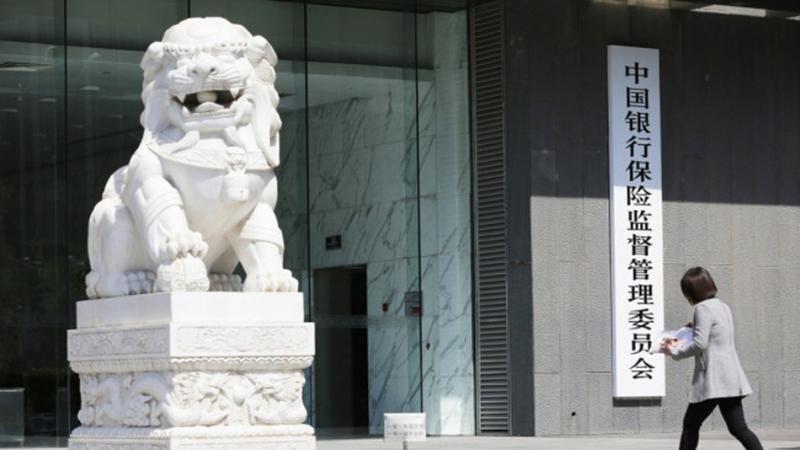 In this April 8, 2018 photo, a pedestrian walks past the headquarters of China Banking and Insurance Regulatory Commission (CBIRC) in Beijing, China. (PHOTO / IC)

Having issued American Depositary Receipts (ADRs) and been listed on the NYSE for nearly or over two decades, the three Chinese firms have complied with the rules and regulations of the US securities market, and are widely acknowledged by investors worldwide, the spokesperson said.

The delisting of the Chinese companies on politically-motivated administrative order of the US government seriously breached market rules and order, the spokesperson said.

Given the three companies' large user base, stable operation, significant influence on the global telecommunications service industry, as well as the small proportion of ADRs in their total shares, the act of delisting will have very limited impact on their market operation and development, according to the spokesperson.

The commission will firmly support the three firms to protect their rights and interests, and believes that they will handle the adverse impact appropriately, said the spokesperson.

Some US politicians, at the cost of damaging the global status of their own capital market, have recently made moves to suppress US-listed foreign companies constantly.

"We hope the US sides will respect the market and the rule of law, and do more to protect the order of the global financial market, safeguard investors' lawful rights and interests and promote the steady development of the world economy," the spokesperson added.

"The cooperation between China and the US is extremely wide in the financial sector. It has brought huge benefits to the enterprises and people of both countries. A stable China-US relationship is not only in line with the fundamental interests of the two people but also meets the expectations of international society,” an official of the China Banking and Insurance Regulatory Commission, or CBIRC, said.

“We hope the US government will meet China halfway, uphold the spirit of nonconflict, nonconfrontation, mutual respect and winwin cooperation, promote the healthy development of the China-US relationship, and maintain international financial market stability together with us.”

In the past year, the CBIRC continued to further open up the country’s financial market. The regulator gavemarket access to new foreign financial institutions in both the banking and insurance sectors. A considerable part of the institutions are US-funded. Some even set up wholly foreign-owned enterprises or joint ventures in which foreign firms take a controlling majority share, the CBIRC said.

However, the US government unilaterally imposed sanctions on Chinese citizens and corporate entities according to its domestic laws, violating international laws and the basic norms of international relations, the regulatory official said.