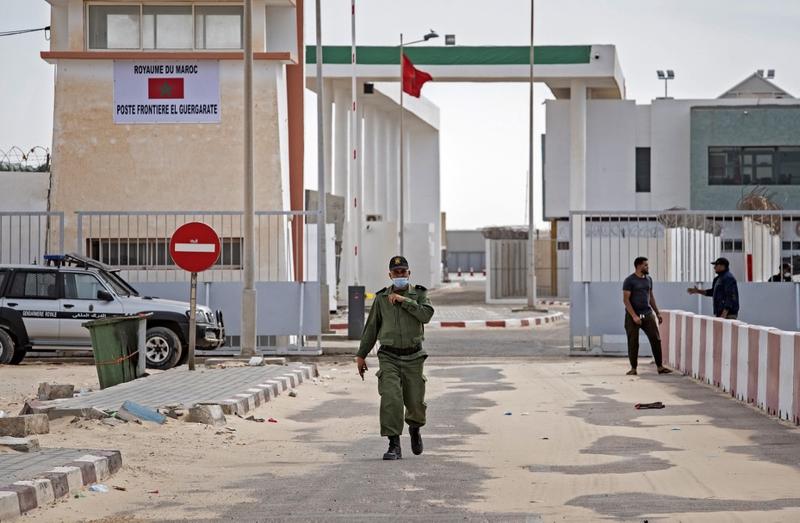 A Moroccan army officer walks near the border in Guerguerat, located in the Western Sahara, on Nov 26, 2020, after the intervention of the royal Moroccan armed forces in the area. (FADEL SENNA / AFP)

NEW YORK - Senior UN officials briefed the UN Security Council behind closed doors on Monday on Western Sahara after US President Donald Trump recognized Morocco’s sovereignty over the disputed region in return for the kingdom normalizing ties with Israel.

Before Trump's announcement, the United States had supported a 1991 ceasefire between Morocco and the Algeria-backed Polisario Front, a movement that seeks to establish Western Sahara as an independent state

Trump’s announcement this month was a departure from longstanding US policy on Western Sahara. The United States had supported a 1991 ceasefire between Morocco and the Algeria-backed Polisario Front, a movement that seeks to establish Western Sahara as an independent state.

The ceasefire is monitored by UN peacekeepers. The 15-member Security Council was briefed on Monday by UN Assistant Secretary-General for Africa Bintou Keita and Colin Stewart, head of a UN peacekeeping mission in Western Sahara.

“There are no major operational changes from our part,” UN spokesman Stephane Dujarric said ahead of the council briefing, which was requested by Germany.

“Our position on the announcements regarding Western Sahara is unchanged and that ... we continue to believe that a solution can be found through dialogue based on the relevant Security Council resolutions,” he added.

The region has effectively been split by an earthen wall separating an area controlled by Morocco that it claims as its southern provinces, and territory controlled by the Polisario with a UN-mandated buffer zone between them.

UN talks have long failed to broker an agreement on how to decide on self-determination. Morocco wants an autonomy plan under Moroccan sovereignty. The Polisario wants a UN-backed referendum including on the question of independence.

President-elect Joe Biden, due to succeed Trump on Jan 20, will face a decision whether to accept the US deal with Morocco on the Western Sahara, which no other Western country has done.

Without naming the United States, South Africa’s UN Ambassador Jerry Matjila told reporters after the council briefing that “decisions contrary to multilateral collective decisions must be discouraged and unequivocally disregarded.”

“We believe that any recognition of Western Sahara as part of Morocco is tantamount to recognizing illegality as such recognition is incompatible with international law,” he said.