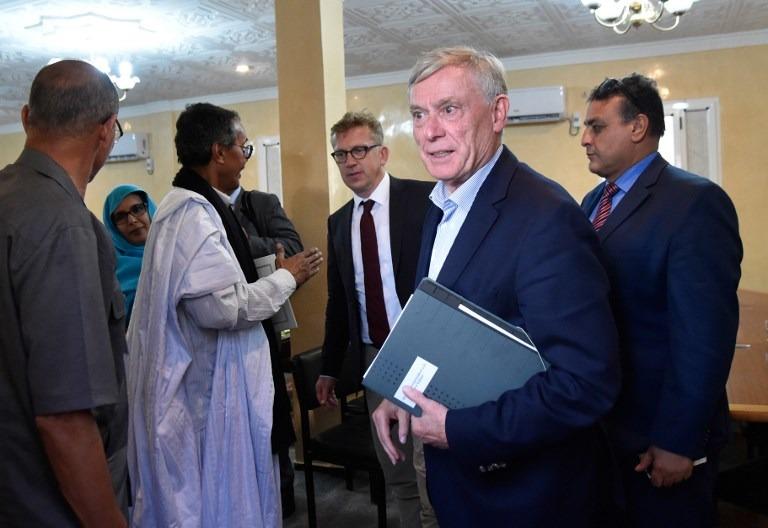 The new UN envoy for the disputed territory of Western Sahara, Horst Koehler, center, leaves following a meeting with negotiators from the pro-independence Polisario Front at Roubani, a camp for Sahrwai refugees on the outskirts of Tindouf, on Oct 18, 2017. (RYAD KRAMDI / AFP)

UNITED NATIONS — Morocco and the Polisario Front independence movement are expected to meet for a second round of talks on the conflict over the mineral-rich Western Sahara, a hopeful sign following the Security Council's call last year to speed up a solution to their 43-year dispute, UN diplomats said Tuesday.

Former German president Horst Koehler, the secretary-general's personal envoy for Western Sahara, told the council in closed consultations that he plans to hold separate talks with all parties in February before getting them around the same table again in March, the diplomats said.

Morocco annexed Western Sahara, a former Spanish colony, in 1975 and fought the Polisario Front for 16 years

Kohler was able to get Morocco, the Polisario Front and neighbors Algeria and Mauritania around the same table in early December for the first time in six years, and though no significant progress was reported the parties remain committed to the UN-brokered talks that have strong Security Council backing.

"I do see hope," German Ambassador Christoph Heusgen told reporters after Tuesday's meeting. "The unity of the Security Council is a very important factor. This is a conflict we can resolve."

But Morocco and the Polisario Front remain very divided over Western Sahara's future.

Morocco annexed Western Sahara, a former Spanish colony, in 1975 and fought the Polisario Front for 16 years. The UN brokered a cease-fire in 1991 and established a peacekeeping mission to monitor it and help prepare a referendum on the territory's future that has never taken place.

The United States, including national security adviser John Bolton last month, has been in the forefront of countries pushing for a solution to the dispute and an end to the UN mission.

Morocco considers Western Sahara its "southern provinces" and has proposed giving the territory wide-ranging autonomy. The Polisario Front insists on self-determination through a referendum for the local population, which it estimates at between 350,000 and 500,000.

Morocco's UN ambassador, Omar Hilale, reiterated to reporters Tuesday that autonomy is all that his government is offering.

On the other side, the Polisario Front's UN representative, Sidi Omar, said a referendum with independence as an option is a red line for the people of Western Sahara.

"Our position is very clear," he said. "The only way for the Sahrawi people to exercise self-determination is through a referendum."

Despite the divergent views, many council members are hopeful.

Asked about the entrenched positions, French Ambassador Francois Delattre said: "I think one of the lessons in diplomacy, and on this issue in particular, is each step at a time."

As an example of hurdles to overcome, Omar said that at December's meeting in Geneva the Polisario Front proposed confidence-building measures, including the release of their human rights activists jailed by Morocco and the opening Western Sahara to human rights groups and international observers to see the situation on the ground. He said Morocco's representatives rejected those ideas and made no proposals of their own.

Omar said the Polisario Front views that as a sign of "a lack of interest in moving forward in the process — but we still believe that we need to work on that."

Morocco's Hilale said confidence-building measures should be dealt with by the UN High Commissioner for Refugees rather than as part of the political process. He also said that there are no prisoners and that 18 UN human rights experts have an open invitation to come to Western Sahara.

Germany's Heusgen said there is a lot of support in the Security Council for Kohler's proposal to look at different confidence-building measures at the March meeting, including demining and arranging family reunions.