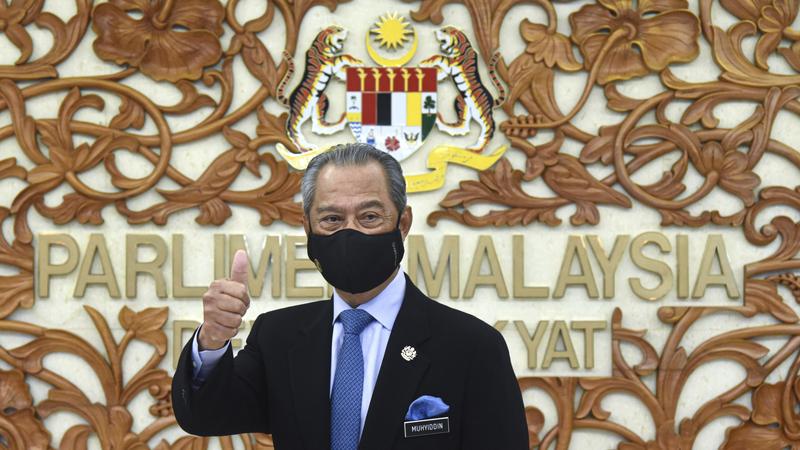 In this photo released by Malaysia's Information Ministry, Prime Minister Muhyiddin Yassin poses for a picture at the parliament in Kuala Lumpur, Malaysia, on Nov 26, 2020. (ZARITH ZULKIFLI / MALAYSIA'S DEPARTMENT OF INFORMATION VIA AP)

Malaysia Prime Minister Muhyiddin Yassin has survived his latest leadership test after lawmakers approved his 2021 budget during the final vote in the lower house of parliament.

The budget’s defeat would have been tantamount to the prime minister losing a vote of no confidence, based on Westminster parliamentary convention

According to House Speaker Azhar Azizan Harun, 111 members of parliament (MPs) voted in favor of the spending plan, versus 108 who were against. The budget’s defeat would have been tantamount to the prime minister losing a vote of no confidence, based on Westminster parliamentary convention.

The vote re-establishes the razor-thin parliamentary majority Muhyiddin controls since rising to power in March. The government has been dogged by repeated concerns about its strength and durability amid infighting. Fitch Ratings earlier this month downgraded Malaysia’s rating, saying the government’s narrow majority “implies persistent uncertainty about future policies.”

The main equities index reversed an intraday loss to gain 0.7 percent at the close, as investors cheered the passage of the budget. The ringgit ended little changed at 4.0553 per dollar.

“The budget’s passage proves that the Perikatan Nasional government is a caring government,” Trade Minister Azmin Ali said in parliament.

The past few weeks saw opposition MPs failing multiple times to block portions of the US$78 billion spending plan, after allowing the budget to pass during the first vote on Nov 21. The government last month amended the budget in order to appease lawmakers from both sides of the divide who threatened not to support it.

Muhyiddin’s victory is unlikely to quell dissent for long. On Monday, veteran MP Tengku Razaleigh Hamzah broke ranks from the ruling coalition to appear alongside longtime rival former prime minister Mahathir Mohamad. The duo expressed the urgent need to revive the country’s economy, and said self-serving politicians were to blame.

“I believe the current government has no legitimacy, and that’s why the situation is unstable,” said Tengku Razaleigh, who abstained from Tuesday’s vote. “If this continues, no one will want to invest in the country.”