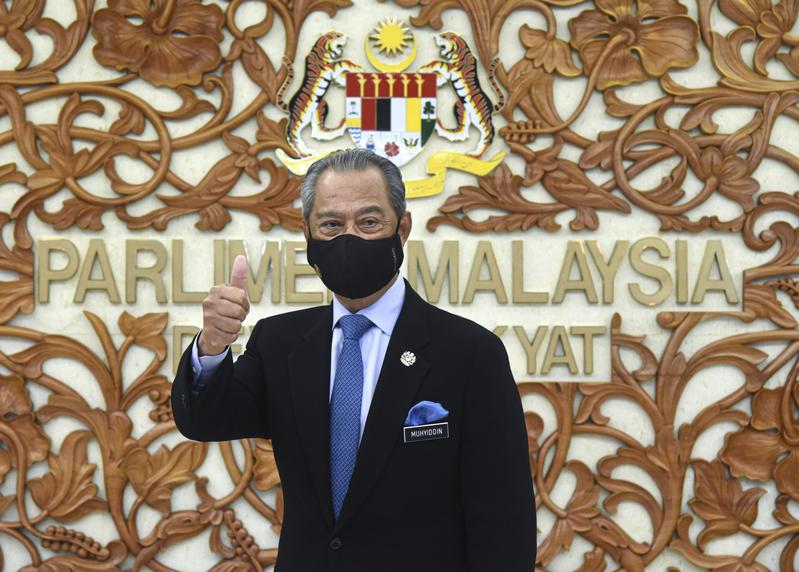 In this photo released by Malaysia's Information Ministry, Prime Minister Muhyiddin Yassin poses for a picture at the parliament, in Kuala Lumpurf, Malaysia, Nov 26, 2020. (ZARITH ZULKIFLI / MALAYSIA'S DEPARTMENT OF INFORMATION VIA AP)

After a parliamentary vote in favor of next year's budget, Malaysia's Prime Minister Muhyiddin Yassin will be tested in another round of debates in the coming two weeks.

The third reading on Dec 15 will be the key moment (for the Supply Bill).

Azmil Mohd Tayeb, senior lecturer in the School of Social Sciences at the Universiti Sains Malaysia

Members of the lower house will scrutinize each portion of the government's bill and cast their votes before it finally adjourns for the year on Dec 15.

Despite an anticipated showdown between the opposition and the ruling Perikatan Nasional coalition, the Supply Bill was passed on Thursday on a voice vote in its second reading. That support for the budget allows Muhyiddin and his party, with its razor-thin majority in parliament, to retain power.

"The third reading on Dec 15 will be the key moment (for the Supply Bill)," said Azmil Mohd Tayeb, a senior lecturer in the School of Social Sciences at the Universiti Sains Malaysia, but Muhyiddin is "not yet out of the storm".

Wong Chin Huat, a political scientist at the Jeffrey Cheah Institute on Southeast Asia of Sunway University in Kuala Lumpur, said the budget could be defeated in the third reading "if the parliament has lost its confidence in the government".

If opposition motions to amend the budget were passed in the committee stage, it would be a partial defeat for the government, Wong said, but Muhyiddin could then immediately table and win a motion of confidence.

Opposition leader Anwar Ibrahim has already declared that lawmakers will continue to closely scrutinize the budget.

Finance Minister Zafrul Aziz presented the budget to the parliament on Nov 6. The proposed 322.5 billion ringgit (US$79.2 billion) spending, the largest in the country's history, gives priority to economic recovery and measures to combat COVID-19. An additional 1 billion ringgit is allocated to stem a third wave of infections. The country has recorded more than 61,000 cases of COVID-19.

Muhyiddin has said some aspects of the proposed spending plan have been amended in line with the views expressed by various parties who took part in the budget debates over three weeks.

The government has always been "open to receiving any views, advice and criticism", he said.

One of the major changes is the extension of a moratorium on loan repayments for small and medium-sized companies and for those who belong to the poorest 40 percent of the population, those with household income of less than 4,360 ringgit a month.

The government has also agreed to allow more Malaysians to withdraw from their retirement funds as a means to cope with income losses brought on by the pandemic; allocate another 50 million ringgit to the state of Sabah to fight COVID-19; and extend a one-off payment to other front-line workers such as police officers and employees of the National Disaster Management Agency.

Earlier, the government proposed a special one-off payment of 500 ringgit to front-line workers with the health ministry.

Awang Azman Awang Pawi, associate professor at the Academy of Malay Studies at the University of Malaya in Kuala Lumpur, said despite the opposition's objection to some portions of the proposed budget, it still supported the budget in principle.

However, the third reading is "more critical" and Perikatan Nasional has an uphill task in getting majority support. This includes not only getting votes from the opposition but also ensuring the support of its own constituents such as the United Malays National Organization and the Malaysian Islamic Party.

Azmil of the Universiti Sains Malaysia, Malaysia, said members of the opposition had to support the budget during the second reading because they did not want to be perceived as callous to people's suffering.

"They also don't want to be branded as traitors for disobeying the king's wish for the budget bill to be approved," Azmil said, alluding to an earlier call by King Sultan Abdullah Sultan Ahmad Shah to support the bill.

Moreover, they are unwilling to provide political ammunition to the government in shaping the public narrative especially on social media, he said.