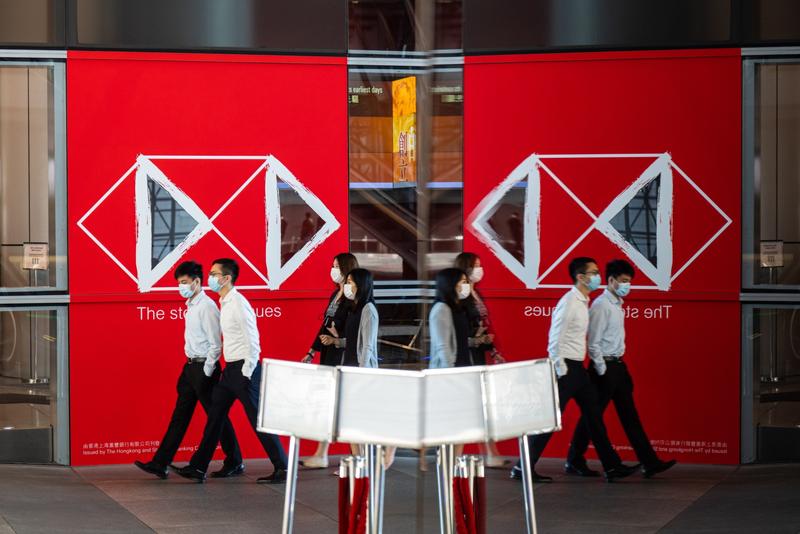 HSBC Holdings Plc has given the clearest sign yet that it will aim to pay a full-year dividend, as losses stemming from the pandemic ebbed and helped Europe’s biggest bank beat third-quarter earnings estimates.

HSBC said it would pay a “conservative dividend” if allowed, the latest lender to push for an end to the British authorities’ ban on shareholder handouts introduced in March to ensure UK banks could weather the crisis. Chief Financial Officer Ewen Stevenson said it would not be a “token” amount when asked about the likely size of any payout.

HSBC said it would pay a “conservative dividend” if allowed, the latest lender to push for an end to the British authorities’ ban on shareholder handouts introduced in March to ensure UK banks could weather the crisis

The lender said adjusted pretax profit dropped 21 percent to US$4.3 billion in the period, beating the US$2.8 billion estimate. The bank also pared back its expected loans losses to the lower end of a previously announced range of US$8 billion to US$13 billion, while signaling that it would step up its cost-cutting plans with more aggressive measures.

HSBC unveiled a sweeping restructuring earlier this year, announcing jobs cuts of about 35,000 over the next three years. The bank said it would announce a further revision to its overhaul when it reports its full-year figures next year, with fresh details of the company’s plans on capital deployment and costs.

HSBC highlighted that it would exceed US$4.5 billion in gross savings, and was on track to surpass a planned US$100 billion reduction in its risk-weighted assets.

Asia was the standout performer in the third quarter, reporting an adjusted pretax profit of US$3.2 billion, making up the bulk of the bank’s profit, HSBC said.

It added that Global Markets revenues increased 16 percent compared to the third quarter of 2019, with earnings from foreign exchange and credit trading rising.

Stevenson wouldn’t say in an interview with Bloomberg Television whether the more radical cuts being considered would lead to more staff leaving. “We’re not focused on an absolute job cut number,” he said Tuesday. “What we are focused on is an absolute cost number and getting the costs down.”

Asia’s outperformance in the third quarter along with lower impairment charges also boosted the results, which beat analyst forecasts for the third quarter. Chief Executive Officer Noel Quinn hinted at possible deals to grow the bank’s business in the region, saying on a call with reporters that the lender would consider “alternative ways” to grow.

The bank wants to expand its onshore presence in the world’s second largest economy. Quinn said that while defending the lender’s position in Hong Kong Special Administrative Region (HKSAR) was critical, it would be hiring an extra to 2,000 to 3,000 staff in the Chinese mainland to grow its wealth management business there.

US and European banks have been reporting stronger-than-expected profit in the quarter thanks to a trading boom and lower provisions, with some indicating that their economic outlook is improving. Spanish bank Banco Santander SA reported on Tuesday profit that beat estimates and an improved capital ratio as it seeks to convince regulators that its balance sheet is strong enough to resume dividend payments.

As well as dividends, HSBC could also return to buying back its shares, though Stevenson said any buyback program would depend on the resumption of the dividend.

The bank’s CET1 ratio, a key measure of capital strength, rose to 15.6 percent, up 0.6 percent from the end of June.

“A decision on whether to pay a dividend for the 2020 financial year will depend on economic conditions in early 2021, and be subject to regulatory consultation,” Quinn said.

HSBC benefited from continuing market volatility that boosted its investment banking revenues, helping offset the impact of low interest rates in other businesses. Investment banking is among the areas targeted to shrink as HSBC as part of the risk-weighted asset reduction program currently underway.

COVID-19 remains the main risk for the global economy and the bank warned that rising geopolitical tensions in Asia remained a particular issue for it given the importance of the HKSAR to its profitability.

On the other hand, HSBC is counting on the new normal spawned by the pandemic to boost its cost-cutting effort.

A shift in customer behavior could reduce the bank’s reliance on its physical branches, while more remote working for some of its staff may reduce office costs, according to Stevenson.

“We’re seeing far higher level of digital engagement than what we saw pre-COVID in some places,” Stevenson said in a Bloomberg Television interview Tuesday after the lender reported third-quarter results. “That will allow us to be more assertive about reducing some of the physical distribution costs we’ve got.”

With most of its employees working from home, the lender is also evaluating how to move to “more of a hybrid model” of working and use video technology to reduce the need for business travel.

The bank could start charging for basic banking services “in some markets” because low interest rates meant they were losing money, Stevenson also said Tuesday.

The London-headquartered lender is also exposed to the fallout from the UK’s withdrawal from the EU and highlighted that expected credit losses could increase by US$500 million to US$1 billion in the fourth quarter if the UK and Europe fail to agree a trade deal.