Once one of Hong Kong’s steadiest stocks, HSBC Holdings Plc is now more than three times as volatile as the city’s benchmark. Investors are betting that will continue.

Options traders in the Hong Kong Special Administrative Region (HKSAR) are pricing in a volatile October, snapping up both bullish calls and bearish puts on HSBC. The cost of one-month contracts tied to HSBC’s Hong Kong shares has climbed to near the highest since May 2009 relative to those on the city’s Hang Seng Index, according to data compiled by Bloomberg. That indicated high demand to protect against further volatility in the stock.

The cost of one-month contracts tied to HSBC’s Hong Kong shares has climbed to near the highest since May 2009 relative to those on the city’s Hang Seng Index, according to data compiled by Bloomberg.

More than 46,000 of the HSBC derivatives had changed hands by 2:07 pm in Hong Kong, according to data compiled by Bloomberg. That’s about 47 percent higher than the 20-day average for a full trading day. Shares of HSBC rose almost 5 percent in the city, compared with the 1.7 percent rise in the Hang Seng Index.

“HSBC’s shares jump today is quite a surprise,” Steven Leung, an executive director of Uob Kay Hian (Hong Kong) Ltd, said by phone. “We haven’t seen any positive news other than Ping An increasing its stake in the bank and the outlook for the banking industry remains dim.”

The shares plunged to a 25-year low two weeks ago amid increasing concerns that its expansion plans in the Chinese mainland could be derailed and as low interest rates and the virus outbreak weigh on its bottom line.

That prompted its biggest shareholder, the mainland’s Ping An Insurance Group Co, to snap up 10.8 million shares to boost its stake to 8 percent, sparking the biggest one-day jump in more than a decade. The recent slump in the share and the valuation only increases HSBC’s appeal, a spokesperson for Ping An said.

“Ping An believes HSBC’s suspension of dividend payments is a short-term issue and has been actively communicating with the lender about the possibility of restoring dividends in the future,” the spokesperson said. 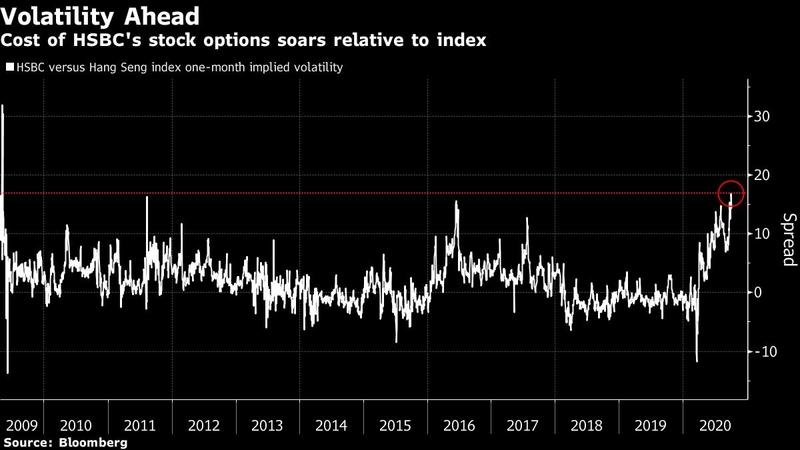 At the behest of UK regulators, the bank suspended its dividend payments earlier this year, riling up its HKSAR retail investor base. The lender’s shares have trailed the Hang Seng Index in five out of the past six years once dividends are excluded. HSBC has pledged to review the payout once the impact of the pandemic becomes clearer.