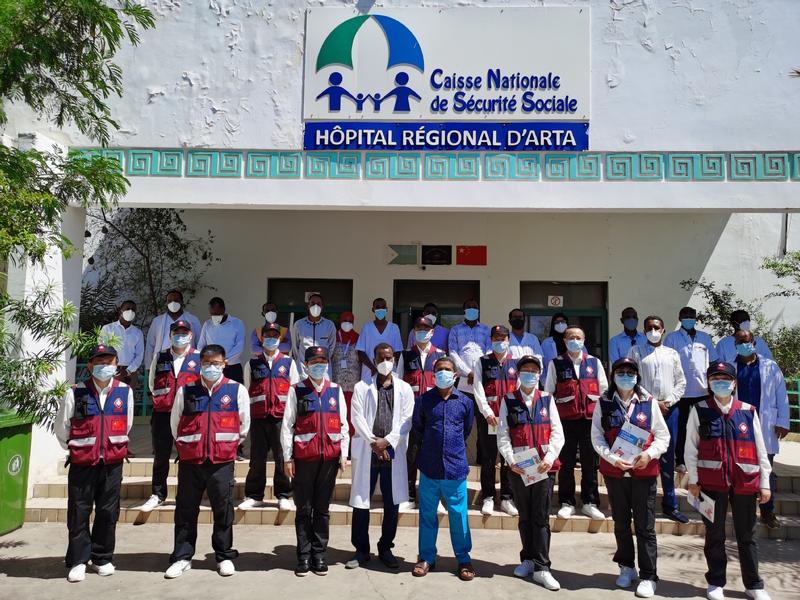 Chinese experts share their experience in the fight against COVID-19 with local doctors in Djibouti on May 3, 2020. (PHOTO / XINHUA)

Djibouti remains firm in its commitment to develop the infrastructure required to realize the East African nation's goal of becoming a regional hub for trade, transport and logistics.

The building plans are central to the country's hopes of transforming itself into a middle-income economy, and authorities are undeterred by the challenges thrown up by the coronavirus pandemic.

Djibouti, a small country on the Horn of Africa, has been developing ports and transport networks to take advantage of its strategic location at the crossroads of the Red Sea and the Gulf of Aden, on one of the world's busiest trade routes.

Its latest project, launched during the pandemic, will see the historical Port of Djibouti turned into an international business district. Some 27,000 jobs are expected to be created directly and indirectly by the project, including positions that will be available in the new business district.

The first phase will proceed with investment of US$513 million, covering what will be known as the International Demonstration Area－the core part of the district.

It involves construction of an exhibition center, including a center of excellence for maritime studies, as well as conference rooms, a hotel and apartments.

This project implements the Port-Park-City concept, which refers to the integration of ports, industrial parks and services.

Expected to be completed within five years, the demonstration area will cover 220,500 square meters.

"This project implements the Port-Park-City concept, which refers to the integration of ports, industrial parks and services," Aboubaker Hadi, the chairman of the Djibouti Ports and Free Zones Authority, said at the inauguration ceremony.

"The ports are a key node in the transportation of goods. The international free-trade zone brings added value to these goods, and this new business district will facilitate the development of services, particularly in the financial sector."

The transformation of the Port of Djibouti, built in 1888, is expected to advance the country's Vision 2035 program, a national development strategy aimed at maximizing the country's geostrategic position.

To help in the process of relocating the activities carried out at the port, Djibouti has built new port infrastructure over the past decade. They include the Doraleh Multipurpose Port, and the ports of Ghoubet and Tadjourah.

Launched in 2017, the Doraleh Multipurpose Port is one of the most modern in Africa and can accommodate vessels of up to 100,000 dead weight metric tons.

An operation run by the Doraleh Container Terminal Management Company, connected to the Addis Ababa-Djibouti railway, serves as a key transshipment hub for the region. The ports of Ghoubet and Tadjourah are multipurpose facilities that mainly handle salt and potash, respectively.

The country is also developing a heavy industry and petrochemical base, Djibouti Damerjog Industrial Park, that is expected to drive the country's industrialization as well as that of the entire East African region.

On Sept 12, Guelleh launched the start of construction on an ultramodern oil port in the industrial park. The facility will be able to accommodate the latest-generation vessels.