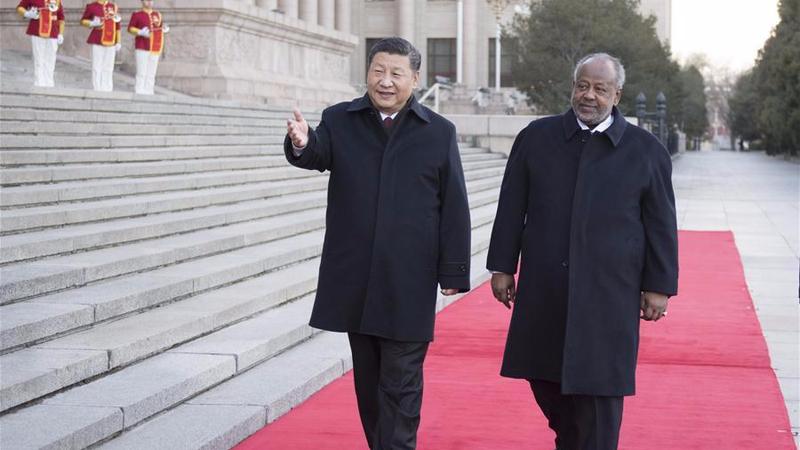 China stands ready to work with Djibouti to implement the results of the 2018 Beijing Summit of the Forum on China-Africa Cooperation and bring bilateral ties to a new stage, President Xi Jinping said on Tuesday.

Xi made the remark during an exchange of congratulations with Djiboutian President Ismail Omar Guelleh on the 40th anniversary of the establishment of diplomatic ties between the two countries.

In his congratulatory message to Guelleh, Xi said bilateral ties have developed healthily and steadily over the past four decades with mutual understanding and support for each other's respective core interests and major concerns as well as fruitful cooperation in various fields.

He recalled Guelleh's state visit to China in Nov 2017, when they jointly announced the establishment of a bilateral strategic partnership, and their meeting during the Beijing Summit of FOCAC in September. During that visit, they witnessed the signing of a memorandum of understanding on building the Belt and Road.

Xi said that he attaches great importance to developing ties with Djibouti, and he is willing to work with Guelleh to consolidate political trust and deepen bilateral cooperation on the Belt and Road Initiative.

Guelleh expressed appreciation to the Chinese government and people for their assistance to and support of his country and said he is satisfied and proud of the sound development of relations with China.

Djibouti will firmly uphold the one-China principle, Guelleh said, adding that he is willing to work with Xi to further promote bilateral ties.