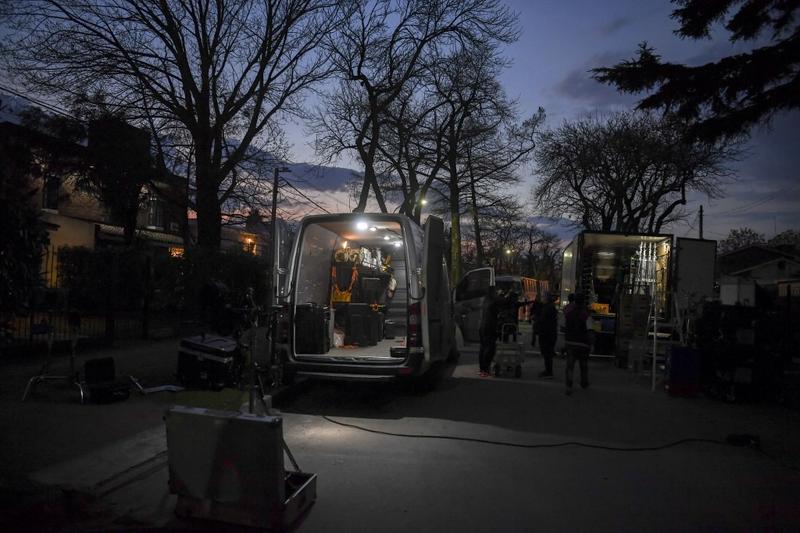 Employees of Oriental Films work during the shooting of an advertisement for Mexico, in Montevideo, on July 20, 2020, amid the coronavirus pandemic. (PABLO PORCIUNCULA / AFP)

Continuous Chinese support, partnerships and investment in Uruguay could be key to boosting the growth of the South American country, especially trade.

Uruguay has been quite successful in dealing with COVID-19, in no small measure due to China’s support. By July, China had sent more than 900,000 face masks, thousands of units of protective equipment and tens of thousands testing kits.

“We are one of the few countries that has a surplus in trade with China; we sell them more than what China sells to us,” Gabriel Rozman, president of the Uruguay-China Chamber of Commerce, said, adding that while Uruguay is “a very small country, China takes us as a serious ally and it takes care of us”.

Located in the southern part of Latin America and with a population of only 3.5 million, Uruguay has 176,000 hectares of fertile land, supplying its citizens with enough food and natural resources as well as plenty of agricultural production for export.

“Uruguay produces much more food than what it needs to feed 3.5 million people. We have food for about 20 million people,” said Rozman.

Uruguay and China have had diplomatic relations in place for 32 years and this relationship has strengthened, in large part on the back of rapidly growing trade related to beef, agricultural commodities and emerging areas like fisheries.

Strengthening partnerships with Chinese fishing and infrastructure companies could help the country shore up its fishing industry while helping China source more seafood from the South Atlantic.

“We look forward to having Uruguayan and Chinese joint ventures again in the fishing sector in particular, to develop the entire sector in which there is much to do,” Francisco Pick, CEO at Pesaco, an Uruguayan foodstuff trading company, said.

For Pick, building a win-win relationship with China is not only an option, but an opportunity to resume projects from the past.

“For example, in 2003 we had an agreement in Uruguay whereby China's second largest fishing company, Shanghai Fisheries, brought fishing vessels to fish in Uruguay,” he recalled.

The goal now would be to establish joint ventures to continue fishing together in the South Atlantic. And it is not only a matter of sending fish to China. Deploying Chinese vessels to renew the Uruguayan fishing fleet is a topic of interest, on both ends of the world.

“There is an idea to renew most of the Uruguayan fleet of fishing vessels that are old and obsolete. So, I say it's not just asking China to buy fish from us but also to offer business opportunities to China,” said Pick, adding that apart from China’s fish purchases, Uruguay can offer to buy fishing boats from them. “I think that these exchanges that favor all parties are the better ones, without any doubt.”

The tiny nation has exported over US$185 million worth of wool and its derivatives. The prospect of a larger trade with China looks promising

Moreover, an infrastructure partnership in the country's capital of Montevideo, supporting Chinese fleets fishing in international waters on the South Atlantic Ocean could benefit the commercial interests of both countries.

“There is a large Chinese fleet fishing in international waters in the South Atlantic, and many of those vessels use the port of Montevideo as a port of call to resupply with goods, supplies and fuel, and also to organize, distribute and send their fishing cargo to China,” said Pick.

“And there is an opportunity, since Port Capurro is under construction and they are looking for partners to manage that port, which will be 100 percent focused in domestic and international fishing. Perhaps, it could be relevant having a Chinese company or a consortium of Chinese companies driving that port,” he added.

Back on land, the Latin American country is also scouting for larger opportunities in its wool trade with China. The tiny nation has exported over US$185 million worth of wool and its derivatives. The prospect of a larger trade with China looks promising.

“Our field, wool and in particular worsted wool, is one of the products that first made its way to the Chinese market,” Nicolas Perez del Castillo, director at Tops Fray Marcos, an Uruguayan textile exporter company, said.

“China is a key partner, from which we can say that 99 percent of the experiences have been very positive … We have high expectations that in this new drive for rapprochement between China and Uruguay, worsted wool will have the recognition and commercial place it deserves,” he said.

For Perez del Castillo, Uruguayan agricultural products with high added value and quality will keep finding their share of the market in China, which he regards as a growing giant.

“We could export much more, but we don't have enough capital to do it,” said Rozman from the Uruguay-China Chamber of Commerce. “We need a partner like China.”

The writer is a freelancer for China Daily.