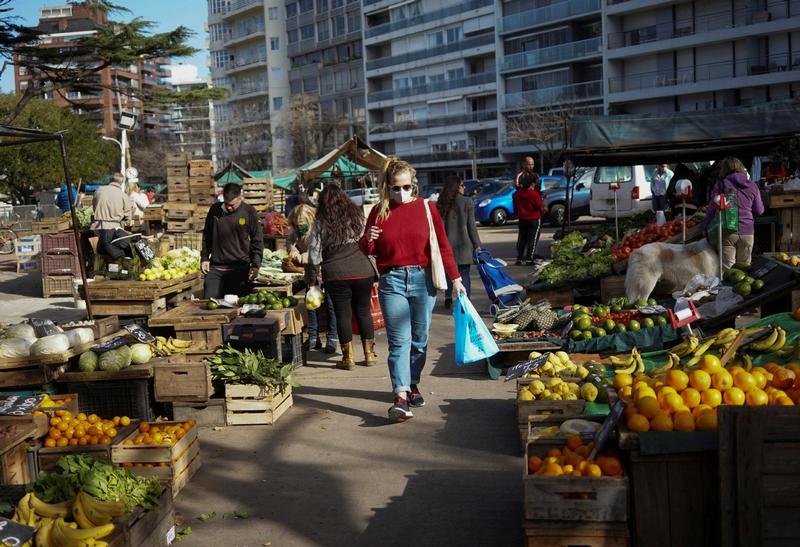 People shop at a produce market as the country has managed to get the coronavirus disease under control, in Montevideo, Uruguay, May 23, 2020. (PHOTO / CHINADAILY.COM.CN)

Aid flowing in both directions to fight the COVID-19 pandemic has strengthened Uruguay's ties with a number of Chinese cities and provinces.

"We have built brotherhood with many cities, and with many provinces of China (besides the central government)," Gabriel Rozman, president of the Uruguay-China Chamber of Commerce, said.

Uruguay's first COVID-19 case was reported on March 13. Rozman said that initially the country with a population of 3.5 million sent medical aid to the Chinese but in the end "we received more, much more than we sent".

Gabriel Rozman, President of the Uruguay-China Chamber of Commerce

The Chinese embassy in Montevideo, Uruguay's capital, said China has sent more than 900,000 face masks, 8,600 units of protective equipment, 21,200 testing kits, hundreds of thermometers and five ventilators, among other supplies to the country.

"For many years China has remained Uruguay's largest trading partner, and there is enormous potential for growth in economic-trade relations between the two countries," said Laura Olivera, a content producer with China Central Television based in Sao Paulo, Brazil.

"I believe that this delicate situation we are experiencing will further strengthen relations between China and Uruguay in stronger and more lasting bonds of friendship that I am sure will be consolidated in new cooperation and even in new areas that have not yet been explored," she said.

One of the places in China from where aid has been shipped to Uruguay during the pandemic is Chongqing, which has close ties to the region of San Jose, to which it is twinned, and to Montevideo.

Help has come not just from Chongqing but from elsewhere in China, too.

Olivera said donations had come from Shanghai, Hainan, Jiangxi, Shanxi (twinned with Uruguay's Canelones department in 1992) and Sichuan provinces, and the cities of Guangzhou and Zhuhai in Guangdong province.

"Both governments are committed to implementing the agreements that have been built in these 32 years of diplomatic relations, but above all, both presidents have the firm commitment to keep making efforts to raise our friendship to a new level," Fernando Lugris, Uruguay's ambassador to China, said.

Mario Pazos, secretary of the Center of Cultural Integration Uruguay-China, said: "China is our first export destination and our country imports a large quantity of Chinese items. The good relationship has developed over many years. The attitude of both countries, the growth of trade relations and the good performance of diplomatic relations carried out by our ambassadors (has helped with) this, as well as the real knowledge of Chinese culture (on the part of) Uruguayans."

In a recent interview with local media, Wang Gang, China's ambassador to Uruguay, stressed that China feels the pandemic in Uruguay deeply.

"I am convinced that the Uruguayan people will know how to gain the final victory in the fight against COVID-19. The virus knows no borders, and to win the battle the international community must give a collective response, and solidarity is the only way this common enemy can be defeated."

The writer is a freelance journalist for China Daily