Luo: Law keeps SAR from 'abyss of a color revolution'

By Eleanor Huang in Hong Kong 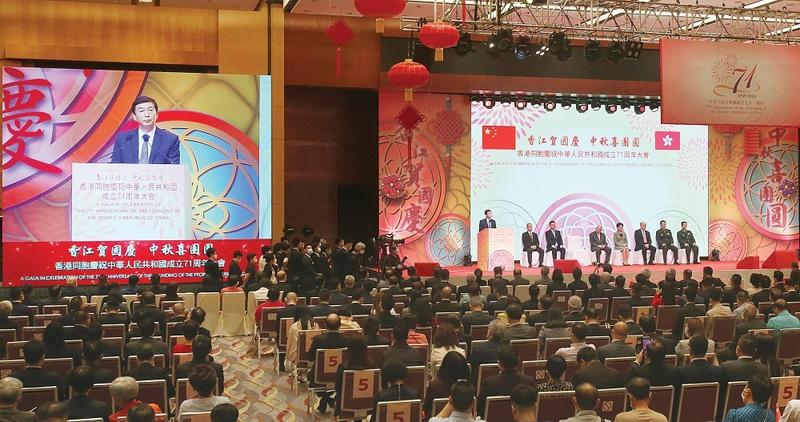 Luo Huining, director of the Liaison Office of the Central People’s Government in the Hong Kong Special Administrative Region, delivers a speech at the Hong Kong Convention and Exhibition Centre during a gala to celebrate the 71st anniversary of the founding of the People’s Republic of China, Sept 30, 2020.. (PARKER ZHENG / CHINA DAILY)

The National Security Law for Hong Kong prevents the city from falling into the “abyss of a color revolution” and has also reined in rampant separatism and raging “black violence”.

Luo Huining, the director of the Liaison Office of the Central People’s Government in the HKSAR, made the remarks on Wednesday at an event to celebrate National Day and the Mid-Autumn Festival. “A Gala in Celebration of the 71st Anniversary of the Founding of the People’s Republic of China” was attended by dignitaries at the Hong Kong Convention and Exhibition Centre.

Luo said the implementation of the National Security Law for the city marked a critical point to “end chaos and restore order”.

Luo emphasized that at a time when the international situation has become increasingly complicated, it now is even more important for Hong Kong to observe its national obligations.

Luo Huining, the director of the Liaison Office of the Central People’s Government in the HKSAR, said the implementation of the National Security Law for the city marked a critical point to “end chaos and restore order”

“As Chinese, patriotism is not a choice, but an obligation, and also the right path to take,” said Luo, who is also national security adviser to the Committee for Safeguarding National Security of the HKSAR.

Hong Kong residents, especially those who work in public services, and the city’s teenagers should be better educated about the nation, including the Constitution, the Basic Law, national security, the nation’s contemporary condition, its history, as well as Chinese culture, he said.

That could help foster a better sense of national identity, which is a prerequisite and foundation for building a better Hong Kong, Luo said.

The head of the liaison office also said that in order to fully and faithfully implement “one country, two systems”, people should be clear-headed about the fact that only by holding fast to the “one country” principle is there room for “two systems”.

Without firmly abiding by the foundation of “one country”, there would not be any benefits from “two systems”, Luo added.

For Hong Kong to break free from the chains that bind residents to “black violence” and “mutual destruction”, Luo called on the city’s residents to stand with determination by the motherland, and to safeguard national sovereignty, its security, as well as its development interests.

“Particularly on the cardinal issues of right and wrong, we should steadfastly uphold our convictions,” Luo said.

“For matters that need us to press ahead, then we will not compromise. For responsibilities that we need to undertake, we will not shy away.”

Without firmly abiding by the foundation of “one country”, there would not be any benefits from “two systems”, Luo said

Luo added that this is how Hong Kong can successfully cope with various risks and challenges, and how residents’ personal interests can be better safeguarded.

Also at the event, Hong Kong Chief Executive Carrie Lam Cheng Yuet-ngor said that the implementation of the National Security Law is gradually getting the city back on track, and the legislation protects the personal safety of law-abiding residents.

Lam said the law is essential to revitalize the economy. After months of social unrest and violent protests that began last year, the city’s economy has been affected to a certain extent, but when the National Security Law went into effect, the violence ended and peace was restored, she said.

Tung Chee-hwa, a vice-chairman of the National Committee of the Chinese People’s Political Consultative Conference and Hong Kong’s first chief executive, said the implementation of the National Security Law lays the foundation of safeguarding national sovereignty, security, and development interests.

At a separate event the day before, Hong Kong Police Commissioner Chris Tang Ping-keung said the National Security Law is taking an active role in restoring law and order in the special administrative region.

He said that in the three months after the legislation went into effect, police had arrested more than 20 people under the law.

Tang also said that he saw some separatists openly reversing their radical political stances after the implementation of the law, signaling a strong deterrent effect against lawlessness in the city.