By Gang Wen and Chen Zimo 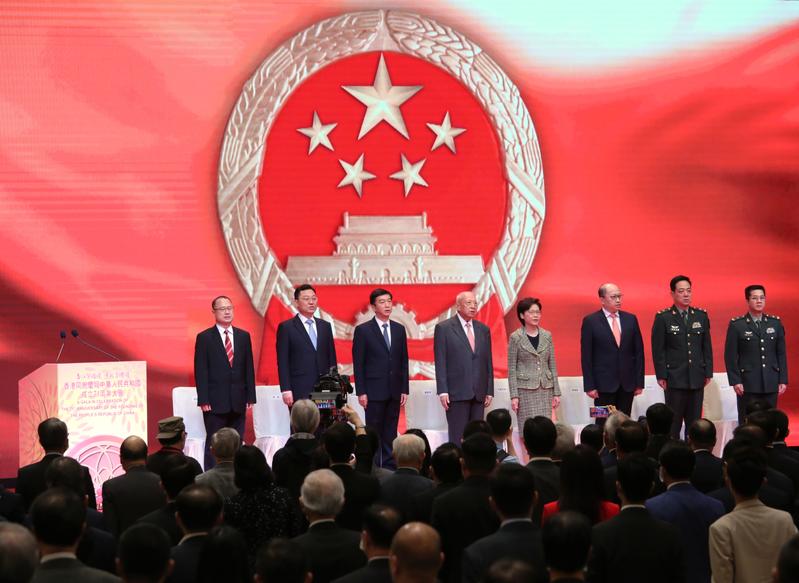 Hong Kong Chief Executive Carrie Lam Cheng Yuet-ngor (4th from right) and other guests sing the national anthem during a gala to celebrate the 71st anniversary of the founding of the People’s Republic of China. At Hong Kong Convention and Exhibition Center, in Wan Chai, on Sept 30, 2020. (PARKER ZHENG / CHINA DAILY)

HONG KONG – The nation’s support is key to address current challenges and seek greater development of the Hong Kong Special Administrative Region (HKSAR), political leaders said on Wednesday, a day before the 71st anniversary of the founding of the People's Republic of China.

Speaking at a celebration marking the anniversary, Luo Huining, director of Liaison Office of the Central People's Government in the Hong Kong Special Administrative Region, said in the face of a complex international situation, Hong Kong needed the backing of the motherland more than ever.

For its long-term prosperity, Hong Kong should make full use of its greatest advantage of "one country, two systems" and seize the opportunities from the reform and opening-up of the mainland, Luo said, citing in particular the Belt and Road Initiative and the Guangdong-Hong Kong-Macao Greater Bay Area development.

By integrating into the national development, Hong Kong can truly address its deep-seated development bottlenecks and guarantee the improvement of people's livelihood, Luo said.

As long as it firmly stands with the motherland, Hong Kong can successfully deal with various risks and challenges, break through the whirlpool of "pan-politicization" and "burn with us" violence, and continue to shine as "Pearl of the Orient," Luo said.

Hong Kong Chief Executive Carrie Lam said she was confident that with support from the nation and with Hong Kong people’s concerted efforts, the city could overcome the challenges and forge ahead smoothly

Speaking at the same event, Hong Kong’s Chief Executive Carrie Lam Cheng Yuet-ngor said that the SAR had restored stability and contained the latest spurt in coronavirus infections with the nation’s support in formulating the National Security Law for Hong Kong and combating the pandemic.

She was confident that with support from the nation and with Hong Kong people’s concerted efforts, the city could overcome the challenges and forge ahead smoothly.

With the strong backing of the central government, the city is, once again, gradually veering to the right course of development, said Tung, who is also the vice-chairman of Chinese People's Political Consultative Conference National Committee.

He is hopeful that Hong Kong society will work more closely to get the city off to a new start and to help strengthen its engagement in national strategies.

Representatives from various sectors of the local community took the stage to share their experiences and views on the close relationship between Hong Kong and their motherland.

Jonathan Choi Koon-shum, chairman of the Chinese General Chamber of Commerce in Hong Kong, said that over the past 40 years, he had witnessed remarkable developments in the country through business exchanges.

In the past few months in particular, foreign investors and Hong Kong entrepreneurs like him saw the vigorous economic rebound in the mainland with the pandemic under control. This boosted their confidence in the economic prospects of the country, he said.

Choi said he was especially proud of China’s commitment to the international community, as it always remained open to the world and strived to promote multilateralism and cooperation on the global stage.

Doctor Liu Shao-haei, president of the Hong Kong College of Health Service Executives, was impressed by the close collaboration between Hong Kong and the mainland over pandemic control.

Touched by the warm farewell given by Hong Kong people to the mainland medical support team two weeks ago, Liu said it reminded him of the scene when he led one of the five Hong Kong volunteer medical teams to assist hospitals in Sichuan after the Wenchuan earthquake in 2008.

The events manifested the love and care between the people of the two places, he added.

“History has proved that at critical moments, the people of Hong Kong and our mainland compatriots will all share everything and unite with each other,” said Liu.