Chief Executive Carrie Lam Cheng Yuet-ngor on Wednesday said the special administrative region government would continue to play an active role in advancing cultural exchanges between the city and the mainland.

Lam made the remarks while officiating at an art exhibition entitled “Hong Kong Tugs at My Heartstrings” held at the Hong Kong Convention and Exhibition Center. With 132 paintings, 66 artists from Hong Kong and the mainland paid tribute to the many achievements Hong Kong had made in the past 40 years during the time of the nation’s reform and opening-up.

Lam said the SAR government had offered considerable support to encourage and foster dialogue between artists from Hong Kong and the mainland. In 2017-18, the Arts Development Fund launched by the Home Affairs Bureau supported 88 cultural exchange projects with HK$5.03 million in grants.

“We believe that cultural and artistic exchanges are of great benefit to artists’ creativity and future horizons, so we will continue to offer our support,” said Lam.

The CE also revealed that the Central Academy of Fine Arts, one of the country’s leading art academies, will participate in the Scheme for Admission of Hong Kong Students to Mainland Higher Education Institutions. Universities which join the scheme accept applications from Hong Kong students who performed well in the Hong Kong Diploma of Secondary Education Examination.

It is a rare opportunity for Hong Kong young people interested in art, said Lam.

Lasting from Tuesday to Saturday, the exhibition’s title refers to President Xi Jinping’s remarks when he inspected the SAR in July 2017. "Hong Kong's development has always pulled at my heartstrings," Xi said upon his arrival in Hong Kong. 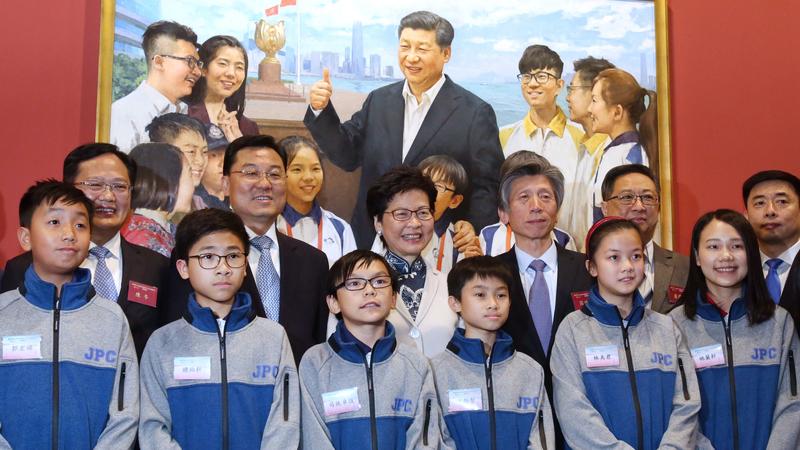 Carrie Lam (Center) the Chief Executive of Hong Kong, Xie Feng (2nd from the left) the Commission of the Ministry of Foreign Affairs in Hong Kong and Fan Dian (3rd from the right) the Dean of Central Academy of Fine Arts has a group photo with the teenager from Hong Kong and the guest during the Exhibition of Hong Kong TUGS at My Heartstrings Art Exhibition to Make 40 Years of Reform and Opening up policy at Hong Kong Convention and Exhibition Center on 19th Dec 2018. The first section opens to citizen until 22nd Dec 2018 and the second section of the Exhibition opens to citizen from 3rd Dec to 10th Dec 2019. (Parker Zheng/China Daily)

According to Lam, a group of 15 painters from the mainland, together with several local artists, made an in-depth tour of Hong Kong in October. They collected materials for their paintings on the city’s achievements in urban construction and cultural development. Their efforts are part of the 132 paintings on display.

The artworks will provide a new perspective on the history of China's reform and opening-up, and the public will gain a better understanding of their hometown and the motherland, Lam said.

Shen Ping, a famous Hong Kong artist who took part in the exhibition, said he had witnessed the changes in the city during the reform and opening-up since he moved to Hong Kong 30 years ago. His paintings, A Glamorous Victoria Harbor, depicted the famous scenic spot at sunset; it pays tribute to the many achievements of Hong Kong.

Chui said she was attracted by the architecture's bright colors; the building also reflects the city's fascinating history.

The exhibition will also be held in Hong Kong Central Library from Jan 3 to 10.