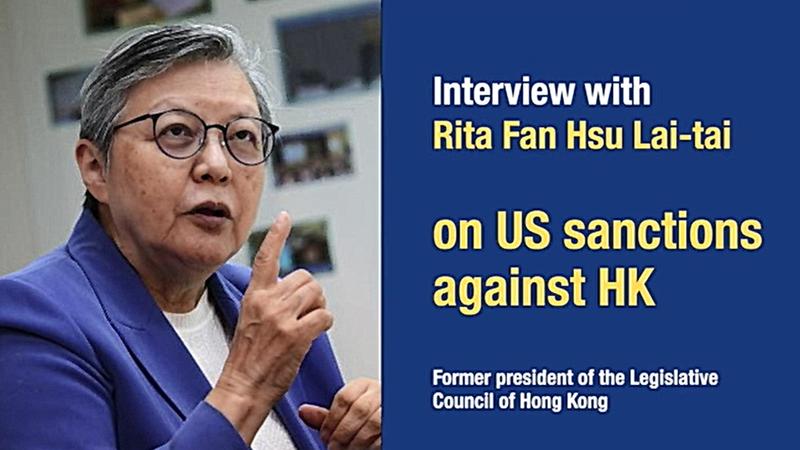 In a one-on-one interview, Fan said the sanctions rhetoric does not show strength, but weakness — the weakness of fear about needing to compete fairly with China in the global market.

The US has intensified tensions with China this year by successively imposing operation restrictions on Chinese tech giants Huawei, TikTok and Tencent.

In its latest such move, Washington on Friday imposed economic sanctions on 11 mainland and Hong Kong officials in response to the promulgation of the National Security Law for Hong Kong. The officials include Hong Kong Chief Executive Carrie Lam Cheng Yuet-ngor and the head of the central government’s Liaison Office in the city, Luo Huining.

Fan said that the crisis-ridden US can barely cope with its own affairs. The US, which is the country hardest-hit by the global COVID-19 pandemic, has seen around 5 million US people infected and more than 160,000 coronavirus-related deaths.

The US this summer also has seen its greatest social unrest in 50 years, with nationwide anti-racism protests that even spread to some European cities.

To shift the focus and pave way for the upcoming presidential election in November, the Trump administration will try its best to blame China, the second-largest economy after the US, Fan said.

“Whether it is legal or illegal, moral or immoral, I think they will not consider it anymore. They just want to push down China,” Fan said.

However, she believes such attempts will not succeed in the long run, given China’s full-fledged economic strengths such as its giant domestic market and extensive business connections.

“Despite the obstructions, we will carry on and work twice as hard to come up with new advancements in technology, new efficiency in manufacturing, basically a new China — full of people with determination, courage and the ability to build up more assets for our country. And also, we will share these assets with those countries who are willing to cooperate with us,” she said.

Fan acknowledged that the political tension will inevitably hurt Chinese companies, but Fan is confident that they will be able to find a way out.

“After all, history has shown that when Chinese people put their minds together, we can create miracles,” she said.

“So let us not lose heart,  and go on, and the pressure that the US administration puts on China will become a move to reinforce the determination and effort,” she said.