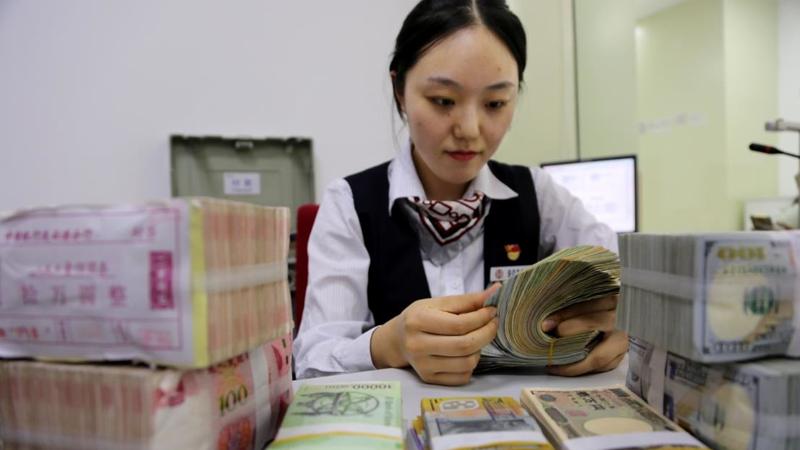 In this undated photo, a cashier counts currency notes at a branch of Bank of China in Lianyungang, Jiangsu province. (PHOTO PROVIDED TO CHINA DAILY)

Government income saw its fastest growth in nine months during August this year, because of the resilient recovery in economic growth and industrial profits, which will support fiscal spending and investment during the rest of this year, experts said.

Liu Shangxi, head of the Chinese Academy of Fiscal Sciences of the Ministry of Finance, said the robust growth in fiscal income was a result of the sound economic recovery.

Tax income grew by 7 percent on a yearly basis last month, on the back of a healthy rebound in industrial output, fixed-asset investment and industrial profits, further bolstering the strong recovery in manufacturing output, said Liu.

Liu Shangxi, head of the Chinese Academy of Fiscal Sciences of the Ministry of Finance, said the robust growth in fiscal income was a result of the sound economic recovery

The steady economic recovery has led to a continuous improvement in the fiscal and tax income. Local governments stepped up the construction of major projects and the central government funds directly transferred to the grassroot units were spent more quickly. The accelerated issuance of local government special bonds helped sustain economic growth, they said.

Official data revealed that total fiscal spending increased by 8.7 percent to 1.64 trillion yuan last month, while the spending by the local governments slowed on a monthly basis as governments at all levels have "tightened their belts" and reduced nonessential and nonobligatory expenditure, said the Ministry of Finance.

Liu Yu, chief analyst for the macroeconomy sector at Huachuang Securities, said that the government has increased spending to improve people's livelihood, especially in areas like social security, employment, healthcare and education. Investment in infrastructure construction, however, still has room for growth.

The newly-increased local government debt will help provide more funds to support spending in the next two months, said Liu. The country's top-level policymakers have urged the finance ministry to finish the annual local government bond issuance by the end of October. The remaining quota amounted to 980.1 billion yuan for the August-to-October period.

Xie Yaxuan, chief analyst of China Merchants Securities, said that the injection of fiscal funds in infrastructure construction, accounting for about 10 percent of the total spending, needs to be improved further to support infrastructure growth, which is likely to be around 8 percent this year, and necessary to shore up the annual GDP.

The total number of infrastructure projects at the grassroots level in cities and counties is relatively small, with lower profits, and the same will lead to a shortage of supportive funds after the local governments issue special bonds. In addition, the funds raised via special bonds may be used for non-infrastructure expenditure. Such factors may limit the scale of infrastructure construction, said Xie.