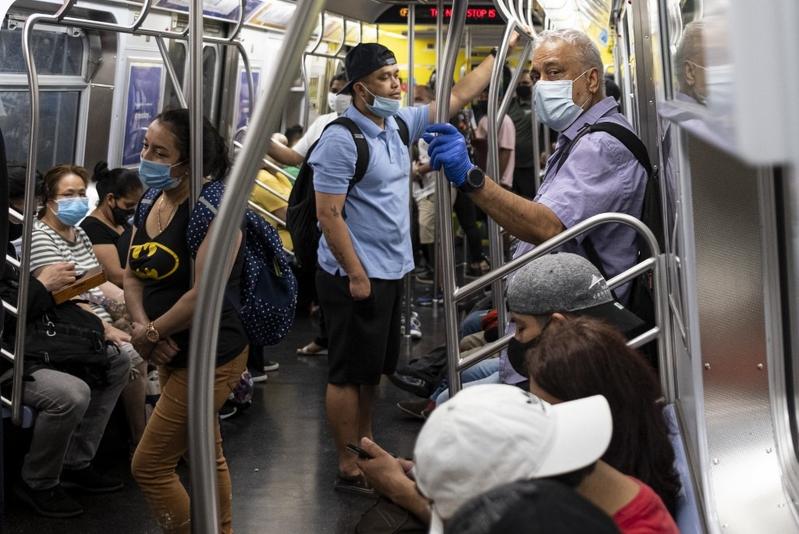 In this July 16, 2020 photo, people stand in a subway train during rush hour amid the coronavirus pandemic in New York City. (JOHANNES EISELE / AFP)

New York City, ravaged months ago by the COVID-19 pandemic, reduced the spread of the coronavirus by 70 percent with voluntary and mandated stay-at-home measures, according to a study. And school closures in the spring could have cut the rate even further with more consistency in mask-wearing.

New York City recorded more than 200,000 coronavirus cases and more than 21,000 confirmed or probable deaths during the first three months of the pandemic

If everyone in the United States' biggest city modeled their mask-wearing behavior on older adults, overall transmission could have been reduced by as much as 32 percent more, researchers wrote in the forthcoming study by Columbia University's Mailman School of Public Health and the New York City Department of Health and Mental Hygiene. A preview of the study, which has not yet been peer-reviewed, was posted online on Monday.

The city recorded more than 200,000 coronavirus cases and more than 21,000 confirmed or probable deaths during the first three months of the pandemic.

The study is in line with previous modeling studies estimating that lockdowns reduced coronavirus transmission by 58 percent in the Chinese city of Wuhan, 45 percent in Italy and 77 percent in France.

COVID-19 is killing ethnic minority children at much higher numbers than their white peers, the Centers for Disease Control and Prevention, or CDC, said on Tuesday.

Of those aged under 21 who died of COVID-19, the illness caused by the novel coronavirus, more than 75 percent have been Hispanic, black or Native American, even though they collectively represent only 41 percent of the US population, according to the CDC, which collected data from health departments throughout the country.

The most comprehensive accounting to date of pediatric infections and fatalities in the United States also shows there were 391,814 known cases and 121 deaths among people under the age of 21 from February to July.

Previously unpublished data from the CDC show an average of 120 patients a day became infected with the coronavirus in half of US hospitals as the pandemic ebbed from its spring peak and rebounded into the summer, The Wall Street Journal reported on Tuesday.

During the roughly nine weeks the CDC collected the data, more than 7,400 patients likely caught the coronavirus in hospitals where they sought care for other conditions, reported the Journal, which said the CDC gave it the data.

The numbers are from pandemic data reported by half of US hospitals to the CDC between May 14 and July 14. During the same period, hospitals cared for a daily average of 25,900 COVID-19 patients, the data shows.

The CDC provided the numbers to the Journal, which the newspaper said show how hospitals nationwide handled infection control while adapting to the virus and managing shortages of equipment used to protect healthcare workers, who can inadvertently transmit the virus between patients.

Data after that date is unavailable because the government stopped asking for it as part of sweeping changes to its data-collection system.

The number of US citizens without health coverage continued to grow last year, even before the arrival of the coronavirus, new federal data show.

Nearly 30 million people in the US went without health coverage at some point in 2019, up by roughly 1 million from the previous year, according to the US Census Bureau data.