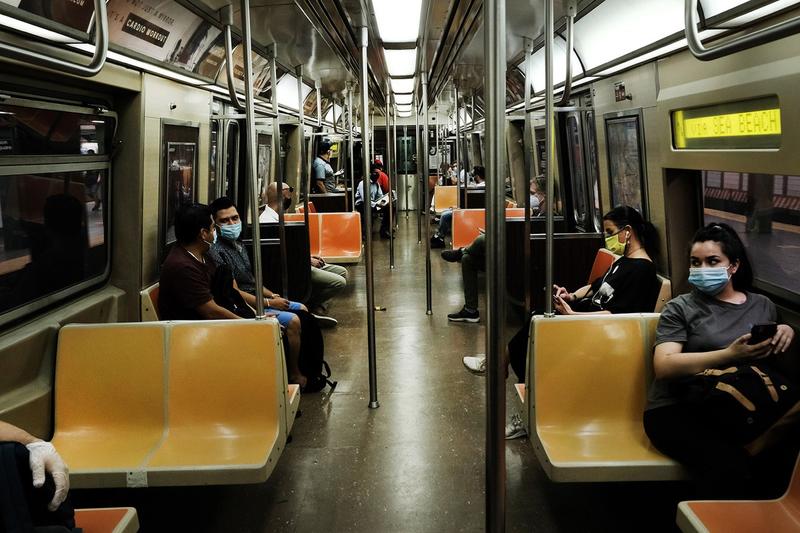 They're not here anymore.

Not in Times Square or at the Statue of Liberty or in fashionable stores in Midtown Manhattan. They may be elsewhere－especially home－but they're not here.

And neither is the US$45 billion these tourists spend annually in New York City that supports about 300,000 jobs. More than 67 million were expected this year, about one-fifth of them from outside the United States－perhaps as many as 2 million from China.

You gotta come back. When are you coming back? We’ll go to dinner. I’ll buy you a drink. Come over. I’ll cook

"New York is the only city in the world where you can get run down on the sidewalk by a pedestrian," The New York Times columnist Russell Baker once wrote.

The throngs of people on the sidewalks of Midtown Manhattan stopped in March when the COVID-19 pandemic hit the city and took an average of 1,000 lives a day.

At the height of the outbreak, the streets were deserted. They echoed to wailing ambulance sirens around the clock. Hospitals and funeral homes were overwhelmed, and the dead filled makeshift morgues. Latest health department figures show that as of Aug 24, the city had 214 coronavirus cases and four deaths.

On June 22, a story in British newspaper The Guardian said:"New York City has inched closer to restoring its reputation as a thriving, hectic metropolis, as the second phase of reopening begins in the city which experienced the deadliest coronavirus outbreak in the US."

Many who have stayed in the city and not fled would tell the writer "wrong". Thriving and hectic the city isn't; unavailable it is.

To this longtime New Yorker, now the city is more memory than reality. You can't do what you would regularly be doing, and nobody knows when, in what shape, or even if it will return to normality.

Museums and the Bronx Zoo are open, but with limited capacity of 25 percent. Broadway's 41 theaters, concert halls at Lincoln Center and other entertainment arenas have no limits because they are shut until next year.

Every week Broadway is closed it loses US$33 million in ticket sales, said Charlotte St. Martin, president of The Broadway League, which represents producers and theater owners.

"On an annual basis, Broadway contributes over US$14.9 billion to the economic impact of New York City," she said. "And we are responsible for almost 95,000 jobs." 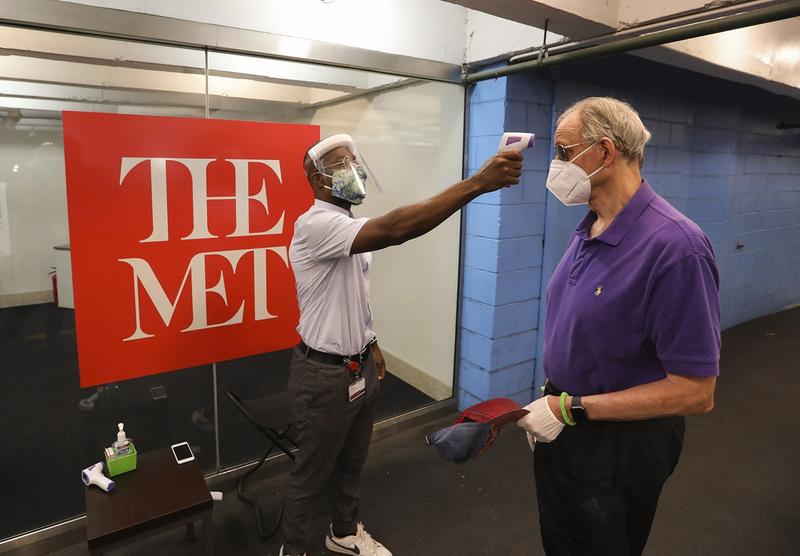 Visitors line up as the Metropolitan Museum of Art reopens to the public on Aug 29. (WANG YING / XINHUA)

The city's subways and buses have been disinfected daily for months, but ridership on subways is down by 75 percent. Transit system officials are forecasting a US$10 billion deficit for next year and say they need US$12 billion in federal aid, or riders could face fare hikes and service cuts.

While tourists are staying home, thousands of New Yorkers and their children have left. Nobody knows for sure how many have new postal codes in the Hamptons, Connecticut, New Jersey, upstate New York and elsewhere.

In July, signed contracts for condos in Manhattan were down by 56 percent from last year and co-op apartments were down by 57 percent, according to a report from real estate brokerage Douglas Elliman and appraisers Miller Samuel.

Deals for homes in suburban areas surrounding New York City have surged. Pending sales for single-family homes on Long Island in July were up by 41 percent; in Fairfield County, Connecticut, they rose by 73 percent; in Westchester County, New York, they climbed by 112 percent; and in the Hamptons they were 121 percent higher.

"They all tell the same story," said Jonathan Miller, president of Miller Samuel and author of the report."The outlying areas around the city are benefiting from outbound migration of Manhattan specifically."

"Fair-weather friends," Mayor Bill de Blasio said of those who have left town. "This city is for New Yorkers who live here, who work here and fight to stay here."

New York Governor Andrew Cuomo, who shut the state down in March, has pleaded with New Yorkers to return: "You gotta come back. When are you coming back? We'll go to dinner. I'll buy you a drink. Come over. I'll cook."

So many people have left that the number of vacant apartments－especially in Manhattan－is the highest in a decade. In June there were 52,700. An additional 67,300 became available in July.More vacancies mean lower rents. A report by Douglas Elliman last month showed a 10.1 percent decline in Manhattan rents in July to an average of US$3,167, the biggest annual drop in almost nine years of record-keeping. But just as rents are lower, so are the number of apartment hunters, real estate brokers say.

However, many schools will offer online classes this fall to limit spread of the coronavirus, eroding the demand for apartments as well as services from scores of stores.

There are also fewer jobs. The city's unemployment rate rose to 20.4 percent in June from 18.3 percent in May, according to the US Bureau of Labor Statistics.

Many of the jobless are young. More than two out of every five unemployment claims filed in New York state since late March were submitted by workers under 35. Their places of work have gone out of business or shut down indefinitely.

Facing pressure from thousands of constituents calling to defund the police, New York City slashed US$1 billion from the police budget. The department is the largest force in the US and employs over 55,000. Its budget was almost US$6 billion for the 2020 fiscal year.

The city has seen a surge in shootings and other violent crime amid the new coronavirus pandemic.

So far this year, there have been more than 900 shootings, nearly double the 492 by this time in 2019. Police have made 180 fewer gun crime arrests this year than last. Arrests in murder cases have fallen by 9.5 percent from last year, and robbery arrests dropped by 11.1 percent.

The cost of health services for the pandemic and the loss of tax revenues from shuttered businesses have put state and city budgets in dire straits.

Cuomo estimated that the economic fallout from the coronavirus and lower tax revenues have put a US$30 billion hole in the next two state budgets.

The state will face budget cuts in the 20 percent range, enough to devastate school aid, subway subsidies and other vital services. The city cuts could be even sharper.

The mayor has set October as the date for implementing his threatened 22,000 layoffs of city workers if he can't reach a deal with unions to reduce labor costs by US$1 billion, in the absence of outside aid from the state or Congress.

So many people are working from home that Manhattan's office districts are empty, depressing economic activity around them from restaurants to small shops, and the commercial real estate market, which also has been hit by store closures.

The city's banks are the biggest office holders. More than 180,000 JP Morgan Chase employees have been working from home. The bank is reviewing how many people will be allowed to return. 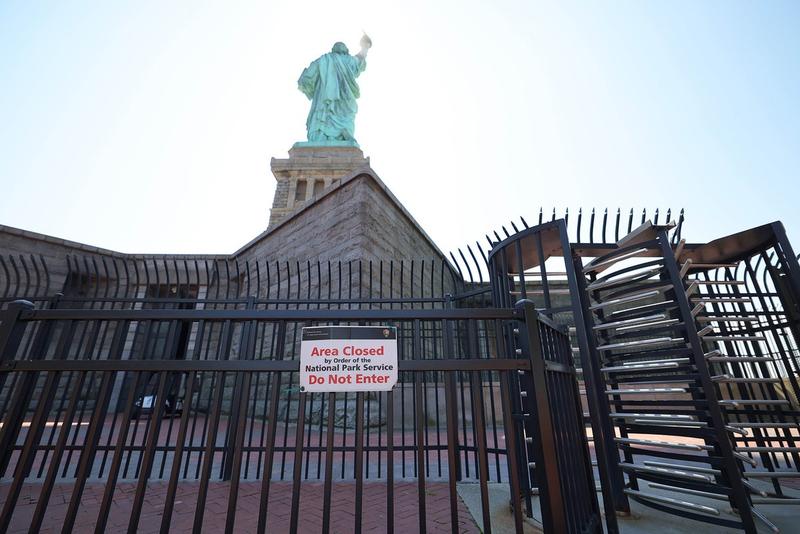 Reporters, editors and other members of staff at the New York Daily News－once the largest-circulation newspaper in the US－no longer have an office.

Its owner, Tribune Publishing, announced on Aug 4 that the newspaper was permanently closing the newsroom in Lower Manhattan.

The company said its reporters and editors have been working remotely since the pandemic started in March. It insisted it would keep the print edition of the paper alive. Employees will be given until Oct 30 to collect their belongings from the office.

Major tech companies, including Facebook and Google, have extended work-from-home policies. Google told its 7,000 workers in the city to operate from home until next summer, while Twitter said its hundreds of employees could work remotely forever if they want to and if their position allows.

There has been some good news about office space.

Facebook agreed to lease all 730,000 square feet of space in the renovated Farley Building early last month, bringing its total footprint in the city to more than 2 million square feet of office space. Amazon recently bought the former Lord & Taylor Building on Fifth Avenue in Midtown Manhattan for offices.

But the stay-at-home order for most workers because of the virus resulted in a decline in consumer demand and reduced spending that have hit the city's retail industry, which has been struggling as consumers turn to online shopping.

J. Crew, the women's preppy retailer, luxury department store Neiman Marcus, Lord& Taylor, the US' oldest department store, and Brooks Brothers, which has dressed all but four US presidents and put its overcoats on Abraham Lincoln, Barack Obama and Donald Trump for their inaugurations, filed for bankruptcy.

Also gone are many of the mom and pop stores that punctuated so many neighborhoods and became victims of high rents before the pandemic, and then the pandemic and no customers.

"Anthony the Tailor from Italy" reads the sign on the green door to an Upper West Side shop. For the past 20 years or so, the owner closed every August and spent the month in Italy. Now, he's not coming back and has put his business up for sale.

The Partnership for New York City said about 33 percent of the city's small businesses may never reopen. So far, the sector has lost about 520,000 jobs.

The hotel industry in New York City is facing its worst crisis in nearly 100 years, according to Vijay Dandapani, CEO of the Hotel Association of New York City.

"About 200 of the city's 700 hotels have closed temporarily or permanently and another 200 are housing the homeless as part of the effort to limit spread of the coronavirus."

"Not until the third quarter of next year, with revenue approaching 2019 levels in 2025."

Amid the gloom there is some good news about two iconic city events.

Macy's Thanksgiving Day Parade will be held, but nobody is sure what it will look like, with a mixture of virtual and on-the-ground events planned.

The Rockefeller Center Christmas tree lighting will be done in different formats.

There are those who remain optimistic that many New Yorkers will return, and that other people will move to the city because of its status as a global center for industries like advertising, banking, creative arts, finance and media.

"People want to get out of Dodge," Brenton Raymond, a licensed broker with Oxford Property Group, said. "But I think they'll come back because of the intellectual capital in New York."

Businessman Larry Silverstein, who leased the twin towers at the World Trade Center six weeks before the 2001 terror attacks destroyed them, said: "I went through 9/11. I remember people telling me we were never going to be able to get people to come back to Lower Manhattan.

"Never bet against New York, because New York always comes back bigger and better than ever before."

In an op-ed article on Aug 4 in The New York Times, headlined "So You Think New York Is 'Dead' (It's not)", Seinfeld wrote: "Real, live, inspiring human energy exists when we coagulate together in crazy places like New York City. Feeling sorry for yourself because you can't go to the theater for a while is not the essential element of character that made New York the brilliant diamond of activity it will one day be again."

Perhaps even thriving and hectic.