By ​Scott Reeves in New York 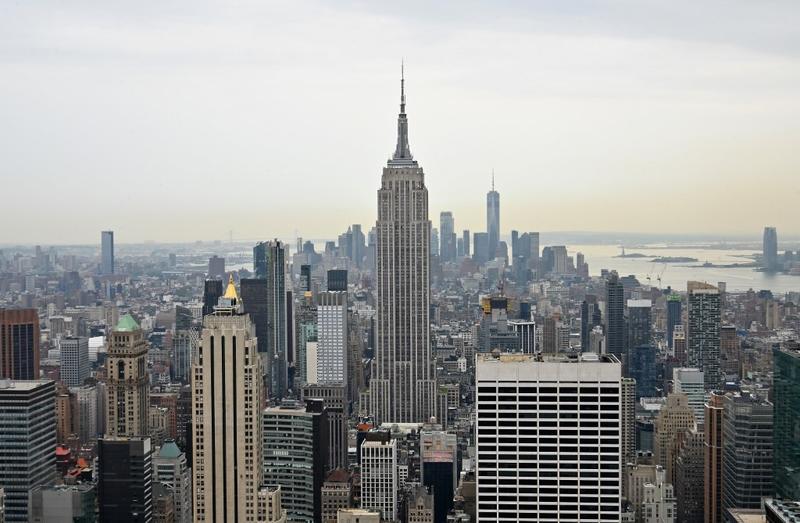 A view of Manhattan with the Empire State Building (center) taken from the the Top of The Rock observation deck in New York City on Aug 6, 2020. (ANGELA WEISS / AFP)

About 160 New York business leaders and Wall Street chief executives sent a letter to Mayor Bill de Blasio telling him restoration of "public safety" and attention to "quality of life" issues are vital to restoring the city's economic health after the coronavirus lockdown.

"There is widespread anxiety over public safety, cleanliness and other quality of life issues that are contributing to deteriorating conditions in commercial districts and neighborhoods across the five boroughs," they said.

"We urge you to take immediate action to restore essential services as a necessary precursor for solving the city's longer term, complex economic challenges."

In response, de Blasio said: "We're grateful for our business community and are partnering to rebuild a fairer, better city. Let's be clear: To restore city services and save jobs, we need long-term borrowing and a federal stimulus－we need these leaders to join the fight to move the city forward."

The New York Times said there were about 18,000 homeless single adults in the city's shelter system, compared with 15,000 before the pandemic.

Homeless people, once a rare sight on Manhattan's Upper West Side, were for a time housed in hotels left vacant after the collapse of tourism during the coronavirus pandemic. Residents objected.

Violent crime increased during the summer after the city eased some lockdown restrictions.

Times Square, site of the annual ball drop to celebrate the new year, is now devoid of crowds because few workers have returned to midtown high-rises. Open use of illegal drugs is common.

JPMorgan Chase is calling sales and trading staff back to the office, The Wall Street Journal reported.

The newspaper, citing people familiar with the matter, did not say how many people would return by the Sept 21 deadline.

Like many New York workers, many Wall Street employees have been working from home since the coronavirus pandemic hit in March.

UBS Group told its employees in a note: "We expect you to return at your own pace and when you feel comfortable."

The United Federation of Teachers, which represents the city's public school staff, said it will prevent schools from reopening on Sept 21 unless the Department of Education improves its coronavirus testing.

Sixteen of the city's 15,000 teachers have tested positive for the virus, the union said.

The union said it takes too long for teachers to get results and this means some could unwittingly spread the virus.

"If the city can't live up to its side of this agreement, then we're going to say you can't open," Michael Mulgrew, president of the union, told NBC.

The lawsuit says that New York has met reopening guidelines.

Restaurant owners said it made no sense that they were forced to remain closed while indoor dining was permitted on Long Island and in upstate New York. New Jersey also permits limited indoor dining.

Cuomo ordered the city's bars and restaurants to close in mid-March as part of the effort to curb spread of the coronavirus.

After the lawsuit was filed, Cuomo said restaurants could reopen on Sept 30 but that indoor seating would be limited to 25 percent of capacity.

New York's infection rate has been below 1 percent for more than a month, far below the 5 percent goal recommended by the World Health Organization.

If there is not a significant increase in new infections, Cuomo said the city could later increase seating to 50 percent of capacity. A decision will be made by Nov 1.