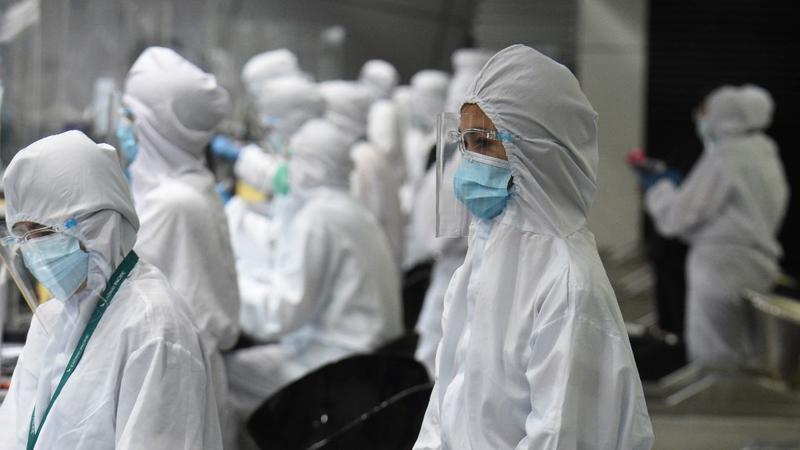 Airline ground staff wearing protective gear work at the counter at the airport in Manila on August 4, 2020. (TED ALJIBE / AFP)

MANILA- From across the Philippines, they gathered to pray by Zoom.

They were praying to be allowed to leave: To be allowed to take up nursing jobs in countries where the coronavirus is killing thousands in hospitals and care homes. In recent months, these care workers have taken to calling themselves “priso-nurses.”

With infections also surging in the Philippines, the government in April banned healthcare workers from leaving the country. They were needed, it said, to fight the pandemic at home.

With infections also surging in the Philippines, the government in April banned healthcare workers from leaving the country. They were needed, it said, to fight the pandemic at home

But many of the nurses on the two-hour Zoom call on Aug 20, organised by a union and attended by nearly 200 health workers both in the Philippines and abroad, were unwilling to work at home. They said they felt underpaid, unappreciated and unprotected.

Nurses have been leaving the Philippines for decades, encouraged by the government to join other workers who send back billions of dollars each year.

With COVID-19 sweeping the globalised economy, the Philippine ban squeezed a supply line that has sent hundreds of thousands of staff to hospitals in the United States, the Gulf and Britain, where some commentators have called the nurses “unsung heroes” of the pandemic.

The Philippines’ healthcare system is already short-handed. In Germany there are 430 doctors and nurses per 10,000 people, in the United States 337 and in Britain 254, International Labour Organization data shows.

The Philippines - where the coronavirus death rate is one of the highest in Southeast Asia - has 65.

The April ban has stopped more than 1,000 nurses from leaving the country. Of those, only 25 have applied to work in local hospitals, Health Secretary Francisco Duque III told journalists late last month. The Department of Health did not reply to a request for an updated figure.

The government has since partially eased the restrictions, but sometimes also tightens them, so nurses are still clamouring to get out.

On the Zoom call in August, someone played a recording of the Philippine national anthem. A Catholic priest prayed and a man with a soft voice crooned a song about passing off your burdens to God.

One nurse, 34-year-old April Glory, had already spent years away from her young son and had been about to leave again when the ban kicked in. Even before the pandemic, she told Reuters separately, she was better off in a war zone in the Middle East than at home.

Soon after she arrived in Yemen in 2011, a bullet pierced the wall of her private hospital, she said. Staff moved patients to safety.

Still, she said, “we were insured, we had free lodging so my salary was intact and I could send more to my family.” Abroad, there was no need to do any work outside her job description: “You are not expected to sweep the floor.”

A nurse in the United States can earn as much as US$5,000 per month; in the Middle East it’s US$2,000 per month, tax free. In Germany, nurses can earn up to US$2,800 per month, and get language training, labour organizers, recruiters and the Philippine government’s overseas employment agency say.

Even with its emergency hiring efforts, the Philippine Department of Health is only offering nurses a starting salary of US$650 per month. It says it will pay another US$10 per day as COVID-19 hazard allowance. 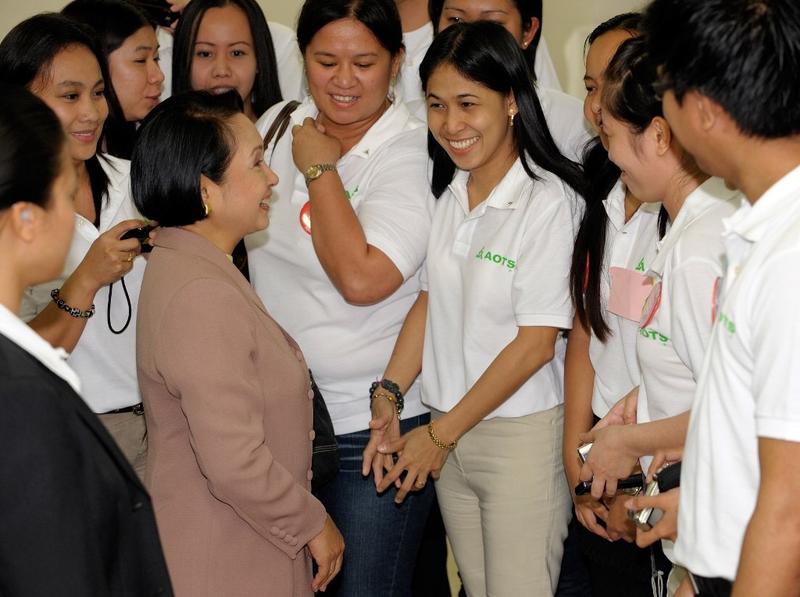 “I felt that I was not earning enough,” said Glory, explaining why she left. Her son, now 11, was a year and a half old at the time. “My mother told me: Better to leave now because my child will not really remember.”

READ MORE: Philippines to use police in house-to-house searches for virus

Abroad, Glory’s shifts were a standard eight hours and she only looked after one or two patients at a time in intensive care. Working in Yemen and then Saudi Arabia, she said she bought a house and a car.

Nurses have recently left faster than they are trained. Last year, 12,083 new nurses graduated in the Philippines. That same year, 16,711 signed contracts to go abroad, data from the Commission on Higher Education and the Philippine Overseas Employment Administration show

Nurses have recently left faster than they are trained. Last year, 12,083 new nurses graduated in the Philippines. That same year, 16,711 signed contracts to go abroad, data from the Commission on Higher Education and the Philippine Overseas Employment Administration show. Those renewing foreign contracts are counted separately. So far this year there have been 46,000 such renewals.

The Philippine government wasn’t able to provide figures for the total number of nurses overseas, or say which countries they are working in.

Filipinos are the biggest group of foreign nurses in the United States. In 2018, there were 348,000, an analysis of US government data by Washington DC-based think tank Migration Policy Institute showed. Even with the pandemic, another 3,260 Filipinos have passed the US nurse licensing exam this year.

A report to Britain’s House of Commons Library in May said more than 15,000 of the National Health Service nursing jobs held by foreigners went to Filipinos - nearly a third of the total and more than any other nationality. The NHS employs a further 6,600 Filipinos in other healthcare jobs.

Labour brokers say that, besides the UK and US, Filipino nurses are sought-after in Germany, Saudi Arabia, the United Arab Emirates and Singapore.

Nine months into the pandemic in the Philippines, reported coronavirus infections in the Philippines have soared to around 270,000. Not all hospitals allow family members to visit, so nurses must feed and clean patients as well as giving health care, said Filipino Nurses United President Maristela Abenojar.

Some nurses are working up to 36-hour shifts because relief staff are calling in sick or not reporting for duty, she said, and sometimes nurses are issued just one set of protective gear per shift. Nurses can’t get tested regularly and if they get sick, there aren’t always hospital beds reserved for them, she said.

At least 56 healthcare workers have died in the Philippines, Department of Health data shows.

“It seems they don’t really value our contributions,” said Jordan Jugo, who works at a private hospital in the Philippines. “It hurts.” He had a contract to work in Britain, but the ban prevented him from leaving.

He said he could sometimes only eat two meals a day and could no longer support his siblings. 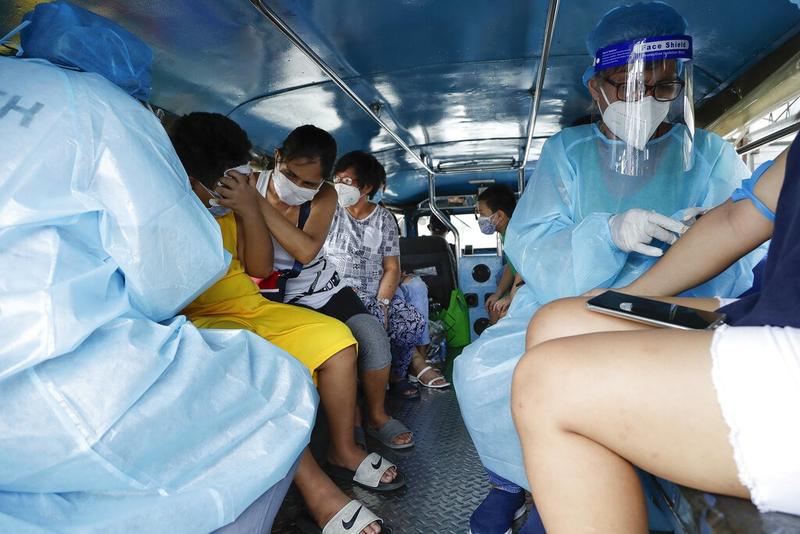 The Philippine Department of Health said its healthcare workers work long hours and “it is natural for them to feel tired and overwhelmed with their immense responsibilities.” It said it had arranged for “substitution teams” in some areas.

Health Secretary Duque has said previously that the government was appealing to the nurses’ “sense of nation, sense of people and sense of service.”

Foreign countries have gone all-out to show Filipino nurses they are valued.

Saudi Arabia sent chartered planes to help them return to work, and only partly filled them so the nurses could maintain social distance.

Saudi Arabia sent chartered planes to help them return to work, and only partly filled them so the nurses could maintain social distance

British ambassador to the Philippines Daniel Pruce went on an 11-minute segment on Philippine television to praise the “incredible commitment and dedication” of Filipino healthcare workers in Britain.

When nurse Aileen Amoncio, 36, got trapped by a lockdown and then the travel ban during a vacation to the Philippines in March, Britain’s NHS granted her a special “COVID leave” and kept paying her, she said. The NHS said staff stuck abroad due to COVID-19 could qualify for such leave.

Amoncio got out of the Philippines in June, after the government eased the ban slightly.

Working at an NHS neurological rehabilitation hospital in the UK, she said she sympathized with the nurses back home, where she once handled as many as 80 patients on a surgical ward at a small hospital. Now she looks after no more than 10 at a time.

Not only are the pay and conditions better in Britain, she said, but she also hopes her daughter will one day be able to join her and get free treatment on the NHS. The hearing implant she needs would cost US$20,000 in the Philippines.

“I’ve served my country already,” said Amoncio. “I don’t want to be a hero again. I am looking out for the future of my children.”

On the Zoom call, Labour Secretary Silvestre Bello III dialed in with an update: Some of those who had existing contracts could leave, he announced. Cheers went up.

Nurse Glory was one of them. She wept.

“I hope the government will not take it against us that we are leaving,” she said. “We are looking forward to helping the government with this fight in other ways. When we are able, when we’ve risen out of poverty, we will.”

Hours later, on the pavement outside the airport, she quickly hugged her son, then raced to board her flight in case the government changed its mind.