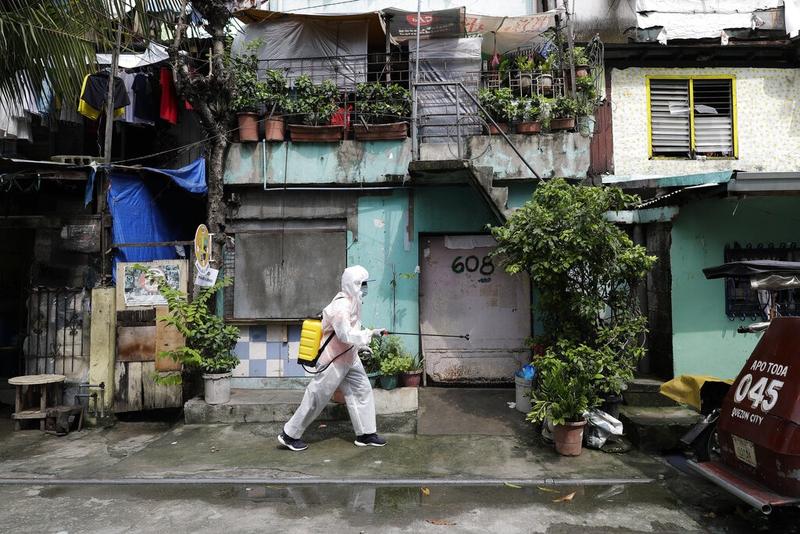 A man wearing a protective suit disinfects an area placed under stricter lockdown measures to curb the spread of COVID-19 in Caloocan city, Philippines on Aug 14, 2020. (AARON FAVILA / AP)

The coronavirus pandemic is clamping the flow of remittances from the Philippines' army of overseas workers, hurting families at home as well as government coffers.

Around 12 percent of Philippine households depend on the remittances they send, according to the 2018 National Migration Survey

Jeremaiah Opiniano, executive director of the Institute for Migration and Development Issues, a Manila-based think tank, said COVID-19 is the "most challenging crisis facing the migration management system of the Philippines".

The Philippines is one of the world's biggest labor exporters, with more than 10 million Filipinos working in nearly 200 countries and regions. Ferdinand Marcos started promoting labor migration as an economic policy in the 1970s, during his long presidency. The first batch of overseas workers went to the Middle East, as rising oil prices spurred demand for migrant labor.

Around 12 percent of Philippine households depend on the remittances they send, according to the 2018 National Migration Survey. Their remittances also provide foreign exchange revenues to the country's coffers. In 2019, remittances reached a record high of US$33.5 billion, accounting for roughly 10 percent of the country's GDP.

"Remittance-receiving families may not be from the poorest of the poor, because they cannot migrate without financial resources. But if they rely only on overseas remittances, they are vulnerable financially," Opiniano said.

These remittances have long cushioned the economy from external shocks, such as those caused by the severe acute respiratory syndrome, or SARS, in 2003, the global financial crisis in 2008-09, and the Sept 11, 2001, terrorist attacks in the United States.

Analysts said this is because migrant workers have always sent money back to their families, no matter what. But the pandemic has changed that narrative, as lockdown measures have shuttered businesses and increased unemployment rates.

Alvin Ang, director of the Ateneo Center for Economic Research and Development, said that unlike during the 2008-09 global financial crisis or the SARS outbreak, COVID-19 pandemic is having a more serious impact on migrant workers.

"This is not just a financial problem. Businesses have to shut down because the virus is spreading fast," Ang said.

The Philippines' Department of Foreign Affairs had repatriated 124,717 overseas workers as of Aug 8.

Apart from losing their jobs, these workers are also among the most likely to get infected, given their large representation in the services and healthcare industries. The department said that as of Aug 9, over 9,000 Filipinos living overseas had been infected by the novel coronavirus.

Ang forecast that the department might need to repatriate 400,000 Filipino workers this year as the pandemic weighs on the global economy. He also sees remittances falling by as much as US$6 billion this year.

Household consumption accounts for 70 percent of the Philippines' GDP and "with consumption also dependent upon remittances, the fall in wages and loss of employment by our migrant workers will affect household demand", Roces said.

Remittances have long powered domestic consumption in the Philippines, but these cash inflows are slowing as the pandemic batters the global economy and puts millions out of work. Bangko Sentral ng Pilipinas, the country's central bank, said remittances from January to May fell by 6.4 percent to US$12.84 billion.

Before the pandemic, the Philippines was one of Asia's fastest-growing economies and expanded by an average of 6.6 percent.

READ MORE: Philippines to use police in house-to-house searches for virus

Nicholas Antonio Mapa, senior economist for the Philippines at Dutch investment bank ING, forecasts the economy will return to the "lower 3.5 to 4.5 percent growth trajectory".

"We do not expect a quick turnaround in consumption behavior, all the more with COVID-19 cases still on the rise," Mapa said in his latest report.

He said household spending will "be sidelined for the foreseeable future due to a fractured labor market and a downturn in remittances".