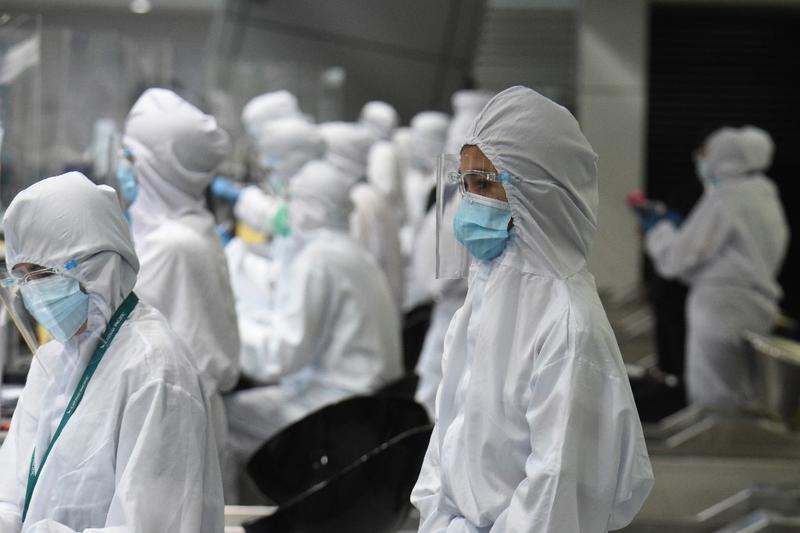 Airline ground staff wearing protective gear work at the counter at the airport in Manila on August 4, 2020. (TED ALJIBE / AFP)

A recent surge in cases of the virus in and around the capital Manila has pushed authorities to reimpose a lockdown affecting around a quarter of the country’s 107 million people.

The Philippines recorded 3,561 new infections on Thursday, taking its total confirmed cases to 119,460. That is higher than Indonesia’s 118,753 infection cases.

The death toll rose by 28 to 2,150, which is less than half of Indonesia’s 5,521 fatalities, but is expected to grow after the recent spike in cases.

The Philippines imposed one the world’s strictest and longest lockdowns in and around the capital, running from mid-March to the end of May, which brought the economy to its knees in the first half.

Afghan Ministry of Public Health confirmed 108 new COVID-19 cases on Thursday, bringing the total number of infections in the country to 36,937.

A total of 753 tests were conducted within the past 24 hours, and 108 were found positive in 11 provinces out of 34 Afghan provinces, the ministry said in a statement.

Australia will make it easier to qualify for wage subsidies, the centrepiece of its response to the coronavirus crisis, following a surge in infections that has forced Melbourne into strict lockdown, Prime Minister Scott Morrison will say on Friday.

The capital of Victoria state, and the country’s second largest city, began a six-week total lockdown on Thursday, requiring its five million people to stay home and shuttering shops and businesses.

Australia last month said it would spend A$16.8 billion to extend its wage subsidy scheme until March 2021, a programme that has been widely credited with propping up economy on course to post its first recession in nearly three decades.

Victoria reported on Thursday 471 new COVID-19 cases and eight deaths in the past 24 hours.

Australia has 20,000 reported cases, of which Victoria accounts for 13,000. Nationwide, deaths total 255, still far fewer than many other developed nations.

Bangladesh reported about 3,000 new COVID-19 cases on Thursday taking the total to nearly 250,000, with over half of the patients having recovered in the country so far.

The latest figures reported by the Directorate General of Health Services (DGHS) under the Ministry of Health showed 2,977 new COVID-19 positive cases and 39 deaths in the last 24 hours across Bangladesh.

The number of confirmed infections in the country totaled 249,651 while fatalities stood at 3,306, showed the official data.

The test results for a man suspected of being the Democratic People's Republic of Korea (DPRK)'s first coronavirus case were inconclusive, though authorities have quarantined more than 3,635 primary and secondary contacts, a World Health Organization official told Reuters.

Kaesong city, which is completely locked down because of the suspected coronavirus infection, will get a special supply of foods and funds to stabilize living conditions for citizens, Korean Central News Agency reported.

The decision was made at a meeting of the executive policy council of  Workers’ Party attended by leader Kim Jong-un on Aug 5. The country has been in a state of emergency since July 26.

Around 30 different types of some 550,000 aid items have been sent to the city since the emergency was declared, KCNA said in a separate dispatch. 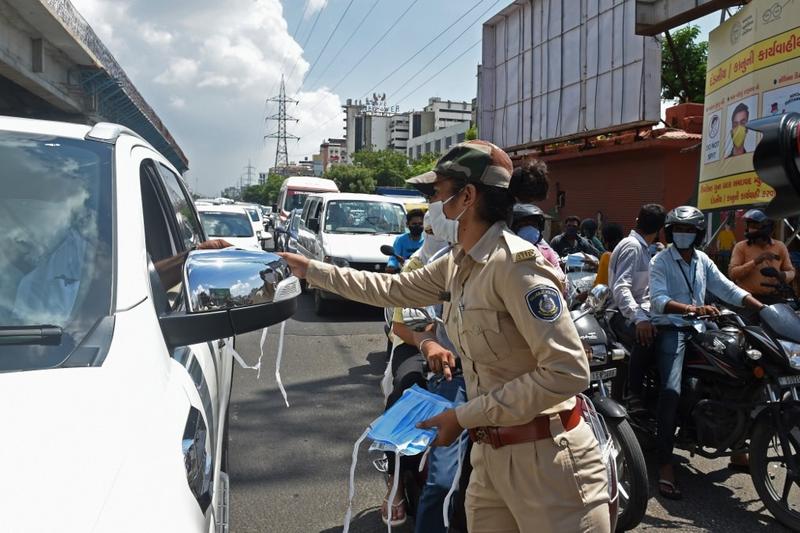 A police woman distributes a facemask to a commuter in a car as part of an awareness campaign against the spread of the COVID-19 coronavirus, at a busy traffic junction in Ahmedabad on July 27, 2020. (SAM PANTHAKY / AF / AFP)

Thailand has delayed plans for a “travel bubble” agreement with select countries as new daily coronavirus cases rise in parts of Asia, putting pressure on its vital tourism industry and complicating efforts to revive its battered economy.

Thailand first proposed the idea in June to allow movement between select countries that have low infection numbers, without the need for travellers to undergo quarantine.

But that has been shelved, officials said, amid second and third waves in East Asian countries that previously had their outbreaks under control.

Despite more than two months without confirmed local transmission and recording only 3,300 cases, Southeast Asia’s second-largest economy is facing its worst crisis in several decades.

Foreign arrivals plunged 66 percent in the first six months of the year, to 6.69 million. The industry has warned that 1.6 trillion baht (US$51.50 billion) of revenue could be wiped out this year.

As the coronavirus has spread to all the Indonesian 34 provinces, President Joko Widodo has ordered regional leaders to impose sanctions on violations against the protocols, according to the Cabinet Secretariat website.

Human trials on a potential coronavirus vaccine are due to start in Indonesia next week as part of a collaboration between state-owned pharmaceutical company Bio Farma and China’s Sinovac Biotech Ltd, a senior researcher said.

The launch of the vaccine trial comes as Indonesia has struggled to contain the spread of the novel coronavirus, with a consistently escalating number of cases.

Over the past 24 hours, 174 new death cases were registered, taking the total fatalities in the country to 17,976, Lari said at her daily briefing, according to the state TV.

An Iraqi health official on Thursday warned of downplaying the risks of COVID-19, as the Health Ministry said the total nationwide infections climbed to 140,603.

It also reported 67 fatalities during the day, raising the total number of deaths to 5,161. 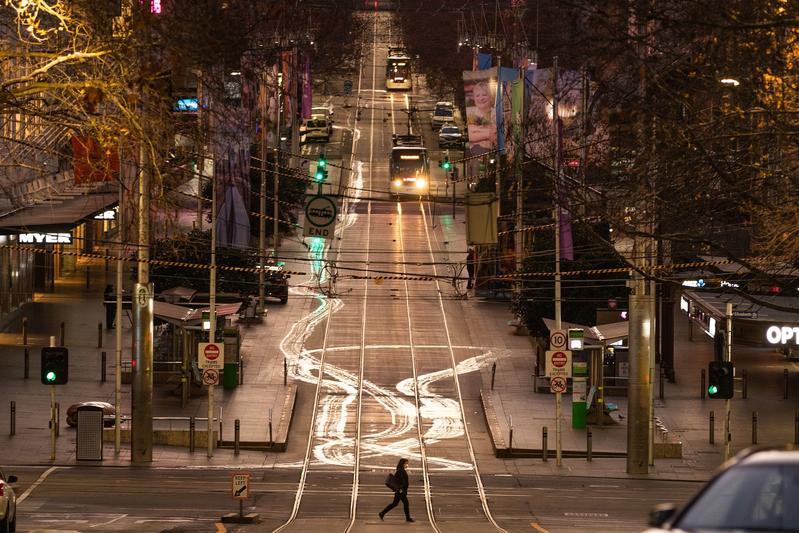 A general view of Bourke Street as a lone Pedestrian crosses the road on August 06, 2020 in Melbourne, Australia. (PHOTO／BLOOMBERG)

The death toll of the virus in Israel increased to 565 while the recoveries rose to 51,395.

READ MORE: Malaysia's new coronavirus cases rise by most in a week

Japanese Prime Minister Shinzo Abe said the current COVID-19 spread doesn’t call for an emergency declaration at this point and his government will take steps to avoid strains on the health-care system.

Abe told a news conference in Hiroshima that he wants those who travel for the Obon period that starts next week to take thorough precautions so that the elderly are not infected.

The virus-related death tally climbed to 1,447, with nine more recorded in the previous 24 hours.

Meanwhile, the Asian country has tested 441 people for the virus in the last 24 hours with negative results, with its total confirmed cases remaining at 293, marking the fourth consecutive day without new cases, the NCCD said.

Another 11 cases have been released, bringing the total cured and discharged to 8,713 or 96.4 percent of all cases.

New Zealand and Australia on Thursday reaffirmed the need for the closest possible collaboration to tackle a global environment shaped by COVID-19.

"In these challenging times, our close collaboration with Australia is more vital than ever," New Zealand Deputy Prime Minister and Foreign Minister Winston Peters said in a statement.

Peters and Australian Foreign Minister Marise Payne met virtually for biannual Foreign Minister Consultations on Thursday and discussed how the two countries are responding to COVID-19 together.

The two ministers covered a range of topics, including Australia and New Zealand's close cooperation in the Pacific, according to the statement said.

"Trans-Tasman cooperation is always very important to New Zealand, but is even more so during a global pandemic," said Peters. 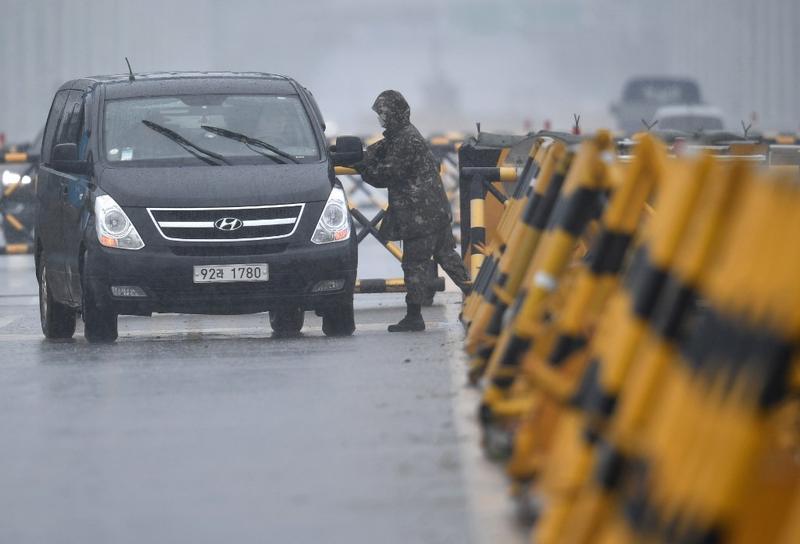 A soldier checks a van at a checkpoint on the Tongil bridge, the road leading to DPRK's Kaesong joint industrial complex, in the border city of Paju on June 24, 2020. (PHOTO / AFP)

Oman's Ministry of Health announced 585 new infections, raising the total number of COVID-19 cases in the country to 80,286, including 488 deaths and 69,803 recoveries.

The Omani government decided on the day to reduce the COVID-19 lockdown of all public places and shops to eight hours from 11 hours.

Palestine reported 353 new COVID-19 cases, taking the tally of infections in the Palestinian territories to 16,981, including 8,128 recoveries and 92 deaths.

Singapore's Ministry of Health (MOH) reported 908 new COVID-19 cases on Wednesday, bringing the total confirmed cases in the country to 54,254.

Of the new cases, four are imported cases, one is community case and the rest are linked with the dormitories of foreign workers.

Of the 903 cases, the vast majority are dormitory residents who were tested during their isolation/quarantine period, even though they are asymptomatic. They are among the final batch of workers being cleared and they come from dormitories with a relatively high prevalence of COVID-19.

Hence they expect the daily case counts to be high for the coming days, before tapering down thereafter as the Inter-agency Taskforce completes the dormitory clearance.

Of the new cases, 20 were imported, lifting the combined figure to 2,520. The imported cases grew in double figures for 42 straight days since June 26.

Thailand has delayed plans for a “travel bubble” agreement with select countries as new daily coronavirus cases rise in parts of Asia, putting pressure on its vital tourism industry and complicating efforts to revive its battered economy.

Thailand first proposed the idea in June to allow movement between select countries that have low infection numbers, without the need for travellers to undergo quarantine.

But that has been shelved, officials said, amid second and third waves in East Asian countries that previously had their outbreaks under control.

Despite more than two months without confirmed local transmission and recording only 3,300 cases, Southeast Asia’s second-largest economy is facing its worst crisis in several decades.

Foreign arrivals plunged 66 percent in the first six months of the year, to 6.69 million. The industry has warned that 1.6 trillion baht (US$51.50 billion) of revenue could be wiped out this year.

The death toll from the virus in the country rose to 5,784 after 19 new fatalities were added in the past 24 hours, Koca said, adding 1,015 more patients recovered, raising the total recoveries to 219,506.

In the meantime, a notice has sent to all the governor's offices in 81 provinces across Turkey, saying inspections will mostly focus on quarantine conditions, social distancing, wearing masks, and hygiene, according to Turkish Interior Ministry.

Measures in celebrations such as weddings and engagement parties have also been tightened to curb the fast spread of the pandemic and funerals as well as other large gatherings will also be rigidly controlled.

The United Arab Emirates (UAE) announced 254 new COVID-19 cases and two more deaths, raising the tally of infections to 61,606 and the death toll to 353.

The total number of recoveries from the virus in the UAE increased to 55,385 after 295 more fully recovered.

Vietnam is close to completing the conversion of a sports stadium into a 1,000-bed field hospital in its new coronavirus epicentre Danang, the health ministry said on Thursday, as it battles an outbreak that has spread to at least 11 locations.

Danang has reported more than 200 cases since the virus reappeared there on July 25. Authorities have said the situation was “under control” and the outbreak would likely peak in the next 10 days.

In the capital Hanoi, 72,000 people who recently returned from Danang would be re-tested, the city’s governing body said on Thursday, this time using a swab-based test, known for its higher rate of accuracy than the blood sample-based rapid test kits, which Vietnam has used for mass screening.

The total number of coronavirus cases in Yemen's government-controlled provinces increased to 1,763 after three new cases were added.

The number of recoveries in the government-controlled areas, including the southern port city of Aden, increased to 894 and the death toll climbed to 508.