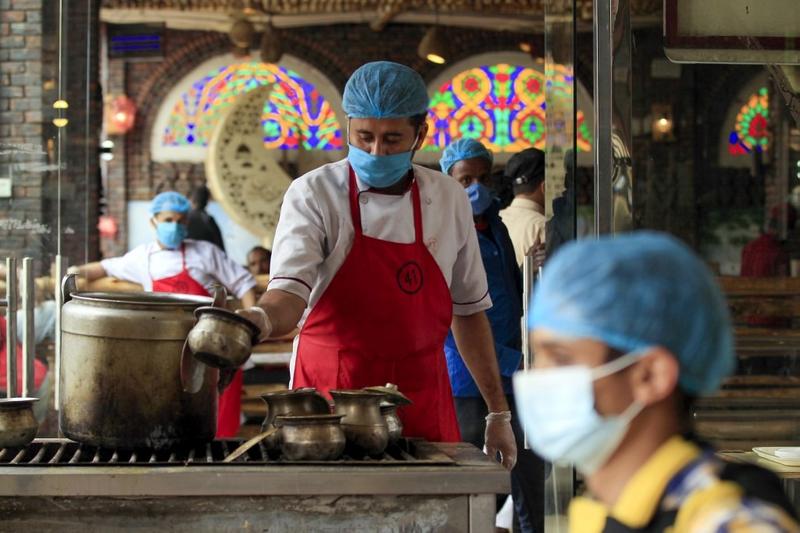 A restaurant worker, wearing a protective face mask, waits for clients at a restaurant in the Yemeni capital Sanaa on July 16, 2020, following the easing of measures against the COVID-19 novel coronavirus pandemic. (MOHAMMED HUWAIS / AFP)

DUBAI / CAIRO / SYDNEY / MANILA / SINGAPORE / HANOI - The number of people who have died in Yemen after contracting the new coronavirus approached 500, according to the latest tally from the World Health Organization.

About 80 percent of the population rely on humanitarian assistance in Yemen after years of war. The country is divided between the Saudi-backed government based in Aden in the south and the Houthi movement based in the capital Sanaa in the north.

According to WHO data, there have been 1,738 COVID-19 infections, with 500 deaths, but the count does not include figures from Houthi authorities.

The Houthis, who control most big urban centers, have not provided figures since May 16 when authorities said there were four cases, and one death.

The United Nations says the virus is circulating rapidly and undetected throughout the country and infections and deaths are probably much higher. 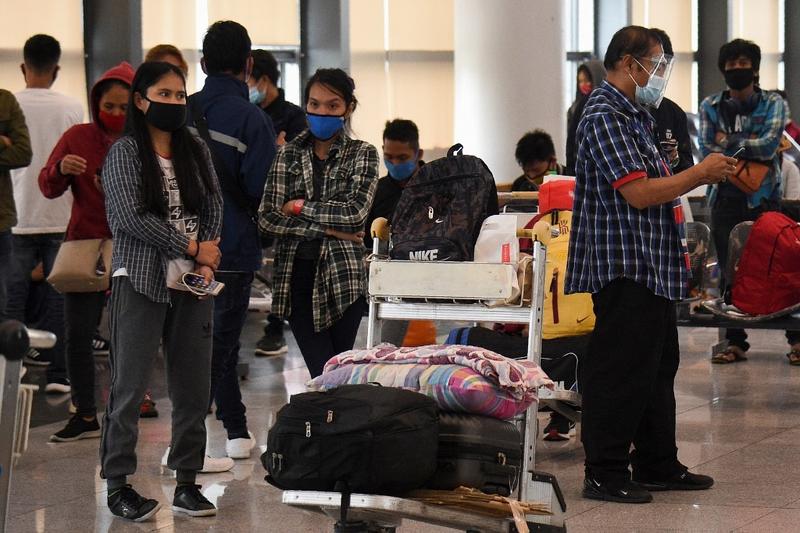 Stranded domestic flight passengers wait for updates at the airport in Manila on August 4, 2020, after all domestic flights were canceled following new restrictions to combat the COVID-19 coronavirus outbreak. (TED ALJIBE / AFP)

The Philippines' health ministry on Tuesday reported 6,352 new coronavirus infections, marking the biggest daily jump in cases in Southeast Asia and after posting a record rise in five of the past six days.

The Philippine capital and nearby provinces on Tuesday returned under strict lockdown for two weeks to arrest soaring cases since restrictions were relaxed in June.

Australia’s second-most populous state Victoria said on Tuesday military personnel will be deployed to enforce COVID-19 isolation orders, with anyone caught in breach of those rules facing tough new fines.

Victoria state earlier this week imposed a nightly curfew, tightened restrictions on people’s movement and ordered large parts of the local economy to close to slow the spread of coronavirus.

But nearly a third of those who had contracted COVID-19 were not home isolating when checked on by officials, requiring tough new penalties, Victoria state Premier Daniel Andrews said on Tuesday.

Andrews said 500 military personnel will this week deploy to Victoria to bolster enforcement of self-isolation orders, with fines of nearly A$5,000 (US$3,559.00) for breaching stay at home orders. The only exemption will be for urgent medical care.

Meanwhile, Australia has closed the national park home to its revered indigenous site of Uluru after some in the community blocked an access route for fear that visitors could carry in coronavirus infections.

Senior Health Ministry official Nasima Sultana said in a briefing on Tuesday that 1,918 new COVID-19 positive cases and 50 deaths were reported in the last 24 hours across Bangladesh.

Cambodia confirmed on Tuesday that one more US diplomat tested positive for COVID-19, bringing the total number of infected US diplomats in the country to four.

A statement from the Health Ministry described the latest US patient as a senior diplomat at the U.S. embassy to Cambodia, who had traveled from the United States to Cambodia recently via a connecting flight in South Korea.

Tuesday was the sixth consecutive day when over 50,000 fresh cases were detected across the country in a single day. 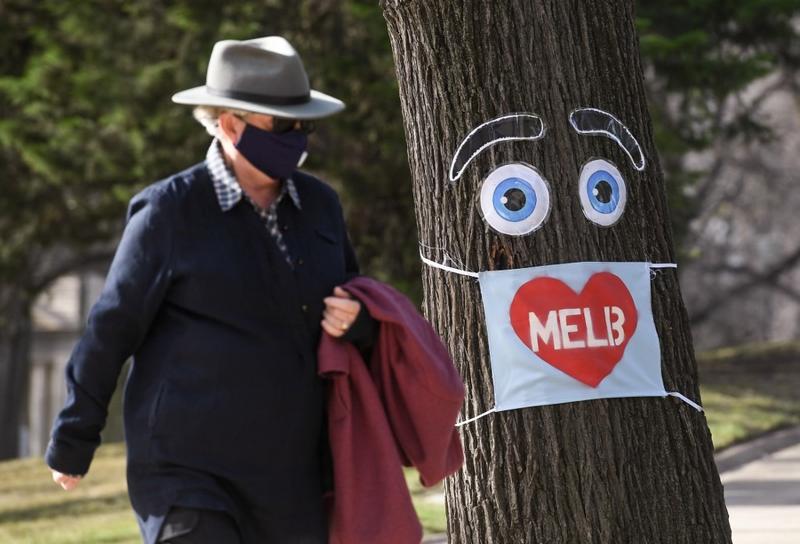 A man walks past a large face mask pinned to a tree in Melbourne on August 3, 2020 after the state announced new restrictions as the city battles fresh outbreaks of the COVID-19 coronavirus. (PHOTO / AFP)

According to the ministry, 1,813 more people were discharged from hospitals, bringing the total number of recovered patients to 72,050.

Iran recorded its highest daily number of new infections in two months at 2,751, raising the total to 314,786. The death toll reached 17,617 with 212 more fatalities overnight, down slightly from 215 the day before.

Earlier on Monday, Israel's Prime Minister Benjamin Netanyahu chaired a meeting of the state's Corona Cabinet to discuss the steps needed to reduce the scope of the spread of the coronavirus in Israel.

According to a statement issued by the Prime Minister's Office, Netanyahu directed that a proposal on reducing contacts and lowering the number of cases should be tabled with the Corona Cabinet within 48 hours.

The Tokyo metropolitan government confirmed 309 new daily COVID-19 cases on Tuesday, according to preliminary figures as of 3 pm local time, with the figure marking the eighth straight day cases have topped 200 in the capital.

The latest figure followed 258 new COVID-19 infections confirmed a day earlier, when the figure dropped for two straight days, coming off record highs late last week, when the capital logged 292 cases on Sunday and a record daily increase of 472 on Saturday.

Meanwhile, the governor of Osaka prefecture touted the powers of gargling medicine to control the coronavirus and recommended its use, sending related shares jumping and clearing shelves of disinfectants even as some questioned the findings.

Based on a limited trial on a group of 41 patients with mild COVID-19 symptoms, gargling with diluted povidone-iodine four times a day reduced the number of those testing positive to 9.5 percent after four days, compared with 40 percent for a group who gargled with just water, Governor Hirofumi Yoshimura said at a press briefing on Tuesday. “It’s worth giving a try,” Yoshimura said.

The finding isn’t based on data from a large, randomized, controlled trial -- the gold standard for assessing the safety and efficacy of any potential therapy.

A total of 8,518 medical workers have contracted COVID-19 in Kazakhstan, the health ministry announced on Monday.

Ainura Akmatova, the head of the public health care department of the country's Health Ministry, told a daily news briefing that 25 of the new cases are medical workers, bringing the total number of contracted medical workers to 2,854, including 1,894 recoveries.

Lebanon's number of COVID-19 infections increased on Monday by 177 cases to 5,062 while death toll went up by three to 65.

Lebanese Health Minister Hamad Hassan announced that the cabinet may extend restriction measures for 15 additional days if cases continue to increase in the coming days.

Health Ministry Director-General Noor Hisham Abdullah said in a press statement that the case is a local transmission.

Another 16 cases have been released, bringing the total cured and discharged to 8,684 or 96.5 percent of all the cases.

Palestine recorded on Monday 244 new COVID-19 cases, bringing the total number of infections in the Palestinian territories to 16,024, while the death toll remains 87.

The Qatari health ministry on Monday announced 215 new COVID-19 infections, raising the total number of confirmed cases in the Gulf state to 111,322, while the death toll remains 177. 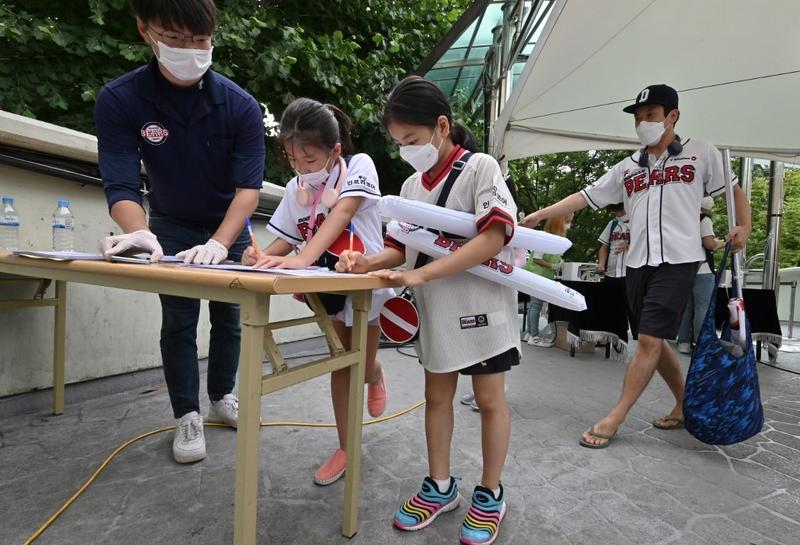 Baseball fans check a list as they arrive to enter the stadium ahead of the KBO league baseball game between Seoul-based Doosan Bears and LG Twins at Jamsil stadium in Seoul on July 26, 2020. (PHOTO / AFP)

Saudi Arabia's accumulated coronavirus cases rose to 281,435 on Tuesday after the registration of 1,342 new infections.

Among the current 34,763 active cases are 1,983 still at the intensive care units, the Saudi health ministry tweeted.

Singapore plans to expand the range of business visitors to boost its hard-hit tourism sector, with the return of mass travel still a long way off amid the pandemic, according to the head of the country’s tourism agency.

Singapore's Ministry of Health (MOH) reported 295 new COVID-19 cases on Tuesday, bringing the total confirmed cases in the country to 53,346.

Of the new cases, seven are imported cases, two are community cases and the rest are linked with the dormitories of foreign workers.

Of the new cases, 99 percent are linked to known clusters, while the rest are pending contact tracing.

South Korea reported 34 more cases of the COVID-19 as of midnight Tuesday compared to 24 hours ago, raising the total number of infections to 14,423.

The daily caseload rose above 30 in two days due to the continued small cluster infections and imported cases.

Of the new cases, 21 were imported from overseas, lifting the combined figure to 2,482. The imported cases grew in double figures for 40 straight days since June 26.

A leading association of Turkish doctors said on Tuesday that nearly 1,000 people are being infected with the coronavirus every day in Ankara alone, questioning the accuracy of government figures which put the daily nationwide tally of new cases at around the same level.

“The number of new cases has gone up significantly over the past week,” said Ali Karakoc, the general secretary of the Ankara Chamber of Doctors, Turkey’s second-largest with 13,000 members. Official data “fail to reflect the true state of play in the country.”

The Ministry of Health declined to comment when asked about the discrepancy and accusations of misreporting.

The United Arab Emirates (UAE) on Monday announced 164 new COVID-19 cases, bringing the total confirmed cases in the country to 61,163, while the death toll remains 351.

Vietnam reported 10 new COVID-19 infections and two deaths on Tuesday, lifting its total cases to 652, with eight dead, as the capital Hanoi said it was running short of the rapid testing kits being used to keep a new outbreak at bay.

The restrictions do not apply to local businesses and production facilities, the provincial government said on its website.

Most of Tuesday’s new cases are linked to Danang, the health ministry said, adding there were over 133,000 people undergoing quarantine, about 80 percent of those in their homes.

More than 88,000 people have returned to Hanoi from Danang since July 8, but only 70,689 were tested, authorities said, with two positive cases.

The gap is due to a shortage of rapid testing kits used to screen thousands of residents at a time, according to state media.