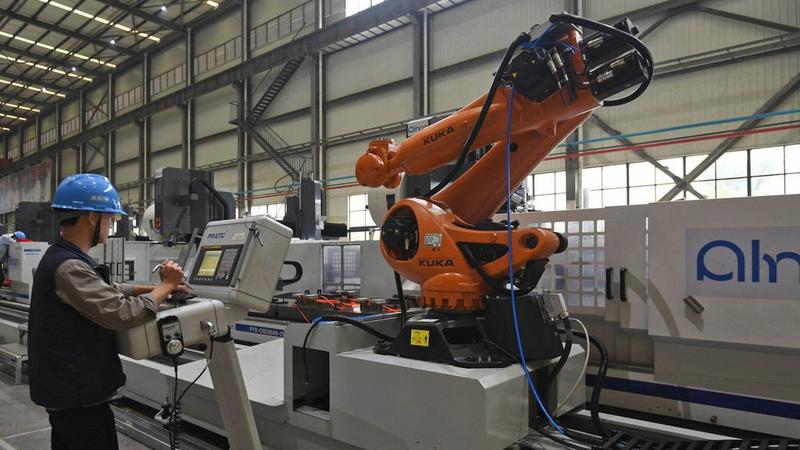 A worker operates a robot at a factory where aluminium alloy products are made in Nanning, South China's Guangxi Zhuang autonomous region, March 23, 2019. (PHOTO / IC)

China’s strategic focus on strengthening self­-sufficiency while deepening opening-­up will cement its economic resilience and provide global investors with sta­bility despite the lingering uncertainties brought by the COVID­-19 pandemic, analysts said on Sunday.

Their comments were based on the country’s recently strength­ened commitment to establishing a “dual circulation” development pattern, in which domestic and foreign markets can boost each other, with the domestic market as the mainstay.

“Dual circulation” is widely seen as the most important policy direction after the well­-known supply­-side structural reform drive, and will likely serve as the policy framework of the upcom­ing 14th Five­-Year Plan (2021­-25), said Li Lin, chief economist at Beijing­-based fintech conglomer­ate CreditEase.

The pattern focuses on fully utilizing domestic resources to empower the economy while fur­thering opening-­up efforts, which marks a difference from the past development mode fea­turing rather heavy reliance on external demand and production factors, especially in natural resources and high-­end technolo­gy, Li said.

At a symposium with entrepre­neurs in July, President Xi Jinping explained the consideration behind the proposed new pattern: In the face of an external environment characterized by rising protection­ism, a global economic downturn, and a shrinking international mar­ket, China must give full play to the advantages of its huge domestic market to boost its economy and the global recovery.

Efforts should be made to elevate the modernization level of the indus­trial and supply chains, promote sci­entific and technological innovation, and speed up breakthroughs in core technologies, Xi said.

On the one hand, by attaching greater importance to expanding domestic demand and addressing weak links in the supply system, the “dual circulation” pattern will make China’s economy less dependent on external factors, he said.

On the other, the country will con­tinue its opening-­up efforts and diversify its trade partners based on a win-­win mindset, making its exter­nal economic circulation less vul­nerable to protectionist measures from one or two countries, he said.

“Uncertainty does remain elevat­ed amid the COVID-­19 pandemic and casts a cloud over Chinese equities, but the long­term trend of global investment flowing into the Chinese market will not change, given its steady economic prospects under the dual circula­tion pattern,” said Cheng.

Since this month, investors in the Chinese mainland stock market started to sell expensive tech shares to capture the rally in undervalued cyclicals — stocks most affected by macroeconomic or systematic changes in the overall economy.

But analysts said the correction could have signaled mid­ to long­ term buying opportunities. As Chi­ na steps up efforts to strengthen self­-sufficiency, domestic brands engaged in technological innova­tion should see faster growth and lead the market uptrend, they said, adding that the consumption upgrading and financial sectors are also expected to benefit.

Zhang Xia, chief strategist at China Merchants Securities, said that the market value of the high­ end automation sector in the A­-share market could see a 10­fold increase over the next decade as leading domestic companies stand out and become more capable in competing with foreign giants.