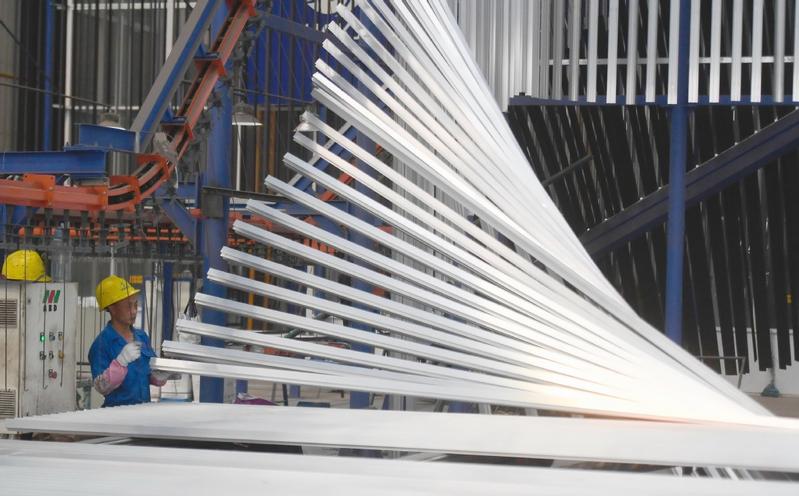 An employee works at an aluminium alloy plant in Wuxing district of Huzhou, Zhejiang province. Wuxing has been promoting high-quality development of the manufacturing industry this year. (PHOTO / XINHUA)

The phrase "dual circulation" has recently become commonplace in the Chinese media as the central authorities have stressed a new model of development in which domestic and external demand complement one another.

The concept was first raised at a high-profile meeting of the Communist Party of China, presided over by Xi Jinping, general secretary of the CPC Central Committee, on May 14. At the meeting, the nation was urged to "fully bring out the advantage of its super-large market scale and the potential of domestic demand to establish a new development pattern featuring domestic and international dual circulations that complement each other".

China started reform and opening-up in the late 1970s, when the economy was mainly domestic market-oriented, with exports only playing a minor role

The new idea was then reiterated at later meetings, with analysts agreeing that it will become the major direction of development at least for the coming five years.

There have arisen some concerns as to whether China will gradually close its door by putting forward and implementing the new development concept. A look at the country's history of economic development over the past four decades would show that such worries are not well-founded.

China started reform and opening-up in the late 1970s, when the economy was mainly domestic market-oriented, with exports only playing a minor role.

At that time, China boasted ample labor, but lacked capital or technology. Therefore, it decided to make use of major international markets to develop its export sector, mainly through importing raw materials and exporting finished goods after processing, thus leading to the rise of the country's exports.

China's large number of skilled workers, low labor costs and preferential policies have helped boost its export sector. In 2006, the ratio of China's exports and imports to GDP reached a peak of 64 percent. By 2013, China had become the world's largest exporter and, through expanding foreign trade and related industries, the country's income levels have also risen significantly and people's living standards have greatly improved.

However, as China's economy expands, its labor costs have been on the rise and in some places, unrestrained economic development has caused serious environmental degradation. Meanwhile, rapid development of the eastern coastal regions, which have been on the forefront of foreign trade, has widened the income gap between eastern and western regions, forcing the country to rethink its development strategy and shift to a more balanced development mode.

As early as during the Asian financial crisis in late 1990s, China had already started to realize the importance of domestic demand. Back then, the crisis dampened China's export sector and the country had to struggle to stimulate domestic demand to expand its economy.

In 2011, it further decided to "establish a long-term mechanism for expanding domestic demand to shift to an economy driven by the coordinated development of consumption, investment and exports".

Such a shift in development orientation has remained unchanged since then. Now China has become the world's top market in terms of retail sales, which exceeded 40.1 trillion yuan ($5.76 trillion) last year. And consumption now accounts for 56 percent of its GDP, with the ratio having risen for eight consecutive years by 2019.

After 40 years of economic expansion, one-sided development that mainly relies on exports and investment will no longer be able to sustain China's growth.

Admittedly, the international situation has changed dramatically in recent years, with the previously prevailing pro-globalization trend being battered by rising anti-globalization sentiment and trade protectionism. The spread of the COVID-19 pandemic has made things worse by further reducing global trade activities.

But as our summarization of the country's economic development road map in the past 40 years shows, China's decision to put more focus on "dual circulation", aiming to attach more importance to domestic market development, is rooted in its rethinking of the development path in the first decade of the century rather than an expedient strategy to cope with the fallout of trade protectionism or the pandemic.

China's shift to "dual circulation", as President Xi has pointed out, does not mean the country will close its door to the outside world. Instead, a more mature and brisk domestic market will do nothing but contribute to the world economy.

While China will continue its economic exchanges with other countries (exemplified by its expansion of domestic market opening-up, such as the financial sector to international investors since last year), its domestic market, as it grows, will naturally require more imports and facilitate foreign investors tapping the domestic market.

The estimated number of middle income earners in China ranges from 100 million to 300 million, the world's largest, based on various surveys. As China puts more emphasis on domestic demand, such a large group of middle-income consumers can create remarkable purchasing power, including that for high-end goods produced by multinationals investing in China or imported from abroad.

By 2035, China's annual imports of goods and services could exceed $40 trillion, according to a forecast by Huang Qifan, former vice-chairman of the National People's Congress Financial and Economic Affairs Committee.

If that turns out to be the case, it will serve as a strong boost to global trade and the world economy.

The author is a senior staff commentator at China Daily.