Fans are poised to head to an outdoor music festival being staged at a venue for the 2022 Winter Olympics, marking the return of live performances for the first time since the onset of the COVID-19 pandemic.

Some of the country's top rock bands will share stages on Saturday and Sunday at the Midi Music Festival in Chongli district, Zhangjiakou, Hebei province.

Shan Wei, the event's director, said, "It will be our first outdoor music festival this year and we can't wait."

All such events arranged for the first half of this year had to be called off or postponed due to the pandemic, leading to significant financial losses.

The lineup for the weekend festival includes leading rock bands Miserable Faith and Hedgehog, and young indie acts such as Jiulian Zhenren.

Known as "China's Woodstock", a reference to an acclaimed United States rock festival in 1969, the Midi Music Festival, which celebrates its 20th anniversary this year, has propelled many domestic indie rock outfits to fame.

Chongli, Hebei province, about 220 kilometers from Beijing, was chosen to host the first major outdoor Midi Music Festival, as the location is a popular ski resort covering some 40,000 square meters. It is also surrounded by mountains, which keep the summer heat way.

With fans' safety the top priority for the organizers, capacity is limited to 5,000 each day. Safe social distancing must be maintained and fans can only buy tickets by making advance online reservations with their ID cards. Temperature checks will be carried out before fans are admitted and they must also show "green" QR codes on their phones to gain entry.

Shan said, "We usually have about 20,000 to 30,000 fans each day for our music festivals, which are often held over three days, including weekends, but in putting together the event in Chongli, we have taken great care to make sure everyone is safe."

About 20 bands will perform at the festival on two stages, with the organizers aiming to avoid any large crowds forming. Activities such as camping and outdoor sports will also be available.

Tickets, which went on sale on July 25, sold out within 30 minutes.

Shan said, "It's a been a slow recovery process for outdoor music festivals and live performances, as we are still concerned about the spread of the pandemic." During the second half of this year, Midi Music Festival organizers will stage one outdoor music event each month across the country, provided the pandemic is under control, Shan added.

Wang Guan, a 40-year-old fan who set an alarm to buy tickets for both days of the Chongli festival, said, "Outdoor music festivals are well-loved and celebrated nationwide. With the official announcement of the Midi Music Festival's Chongli event, summer is in full swing."

A designer at an advertising company in Beijing, Wang wanted to celebrate his 40th birthday in May by attending an outdoor music festival with his family. However, his plans were dashed by the pandemic.

"I went to the Midi Music Festival when I was in high school. With the scene thriving in Beijing, I often go to watch performances at live house venues," Wang said.

"I've been bored during the past six months, when there have been no shows due to the outbreak. Although many online performances are available, I still miss the atmosphere of live shows. There is an irreplaceable vibe between the performers and fans."

Many other fans have also voiced their excitement on social media platforms about the return of live performances, with some calling for people from the same city to share cars to Chongli.

"Live music has been badly affected by the COVID-19 pandemic, so people are happy to get together for performances, even if the location is far from their homes," said Ling Chen, a fan living in Hangzhou, capital of Zhejiang province.

Ling usually attends the Midi Music Festival and Strawberry Music Festival, two major outdoor events, when they are staged at venues near her home.

She bought tickets for the Chongli event along with three of her friends.

"In the past, we attended outdoor music festivals to watch performances by our favorite bands, but now we just want to get back to the live music scene, which has disappeared from our lives during the past six months," Ling said.

Nine Treasures performs at a venue in Beijing. (PHOTO PROVIDED TO CHINA DAILY)

Like their fans, indie rock bands are also eager to return to live shows.

Askhan, lead vocalist and guitarist with the folk metal band Nine Treasures, from Inner Mongolia autonomous region, said: "Since the onset of the pandemic, it's been difficult to make a living. It is hard to plan for the future."

Founded in 2011, the band, which also comprises bassist Orgil, drummer Namra, morin khuur (horse-headed fiddle) player Tsog and stringed instrumentalist Saina, gained a following overseas after making a European tour in 2015. Fans have been attracted by the band's traditional instruments and its interpretation of hard rock.

Before the pandemic, Nine Treasures was touring the world and also staging at least two shows in China every month.

"It's not easy to build a connection with our fans. In the absence of live shows, we could only reach them through online events, which was very disappointing," Askhan said. "While uncertainties still surround the return of live performances, we're happy to be able to work again."

The band will give its first live show this year at the festival in Chongli, which will also feature Hedgehog, a rock outfit based in Beijing.

When the event was officially confirmed, Hedgehog's lead vocalist and guitarist Zhao Zijian posted on Sina Weibo: "Finally, we can play for you in person. The summer is complete with rock music."

Founded in 2005, Hedgehog comprises Zhao, drummer Shi Lu and bassist He Yifan. It is one of the country's most popular bands, performing during festivals at home and overseas, including shows in New York and Helsinki, the Finnish capital.

As it has been unable to perform live due to the pandemic, the group has been busy with its latest album, A Newborn White Immortal, which features 12 original songs and was released on July 13.

Last summer, the group took part in the reality show The Big Band, which saw the emergence of many Chinese indie rock acts. 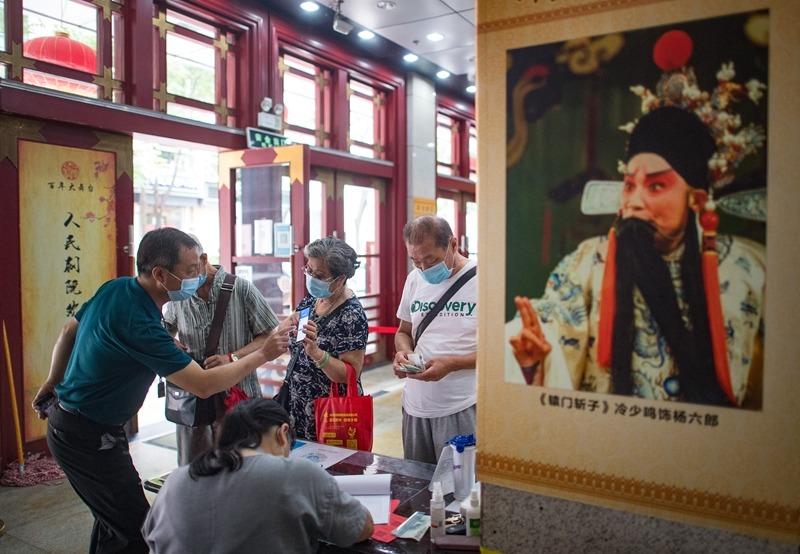 Residents in Wuhan, Hubei province, show their health QR codes before entering a theater in the city. (XIAO YIJIU / XINHUA)

On July 25, the second season of the show premiered on iQiyi, one of the country's major online streaming platforms, with 33 indie rock bands competing.

While creating an online buzz with performances by established bands, such as Re-Tros and Muma, and newcomers, including Fulushou and Mandarine, the show has reignited fans' passion for live music.

Veteran music producer and songwriter Zhang Yadong said: "Indie music was somehow reborn last summer largely thanks to the show, which introduced lesser-known bands to new, younger audiences and gave many indie rock lineups the opportunity to perform. It's been very difficult for them to survive during the outbreak, but hopefully things will get better soon."

For Hedgehog, which was on the verge of breaking up before appearing on The Big Band, the show has given the group fresh life and a new fan base.

Zhao said, "Due to the pandemic, we stayed home and spent lots of time preparing the new album, which meant a fresh start for us. Now, with many outdoor music festivals starting to reappear, we want to see the fans' reaction to our new music."

On Sept 5, the band will perform at Starnest Carnival, an outdoor music event at Nanxijiang Music Park, Wenzhou, Zhejiang.

On July 28, the Strawberry Music Festival announced an event to be staged in Lingshui Li autonomous county, Hainan province. Although no date has been disclosed, the lineup will feature more than 40 groups. 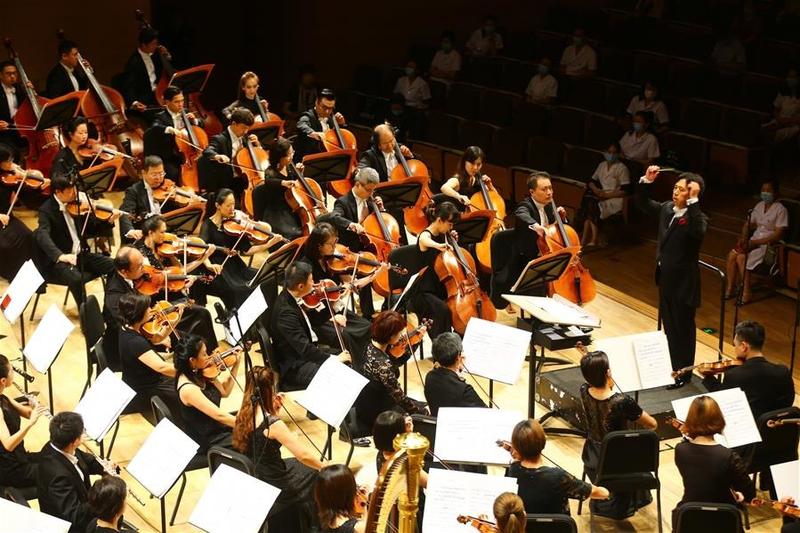 The Tianjin Symphony Orchestra gives a performance on Aug 1, its first since the emergence of the pandemic. (ZHOU RUNJIAN / XINHUA)

On July 25, classical musicians, including pianist Zhang Haochen, conductor Yang Yang and the NCPA Orchestra, performed at the National Center for the Performing Arts in Beijing. The program featured Rachmaninov's Concerto for Piano and Orchestra No 2 in C minor and the composer's Symphonic Dances.

The performance was the first held at the iconic venue since the emergence of the pandemic. Although only 30 percent of the seats could be used, the concert attracted more than 33 million views online.

More shows have been or are being staged at the venue this month, including a gala by the National Ballet of China on Aug 6 and Aug 7, a concert by pipa player Wu Yuxia on Aug 13, and Henrik Ibsen's play A Doll's House by the NCPA Drama Ensemble from Aug 25 to Aug 30.

Before taking the baton to lead the Beijing Symphony Orchestra in a performance at the Forbidden City Concert Hall on July 31, conductor Li Biao said, "For musicians, it's not a complete performance without audience applause."

"As our first live concert since the novel coronavirus outbreak, it was very special and meaningful to us," said Li, who was appointed the orchestra's chief conductor in December after a successful career elsewhere as a conductor and percussion soloist.

"We hope to send a resounding message with this concert that live classical music has returned to the stage."

Li added that a full summer festival program is planned for this month, with some 30 live concerts being staged in Beijing, Tianjin and cities in Hebei.

Also on July 31, the Jingju Theatre Company of Beijing staged its first show at Chang'an Grand Theatre since the viral outbreak. The program featured Peking Opera artists, including Du Zhenjie and Chi Xiaoqiu, performing the classic piece Hong Zong Lie Ma. The company said tickets sold out within two hours and 95 percent of those attending were young people.

This month, the company will premiere a contemporary Peking Opera piece in memory of Li Dazhao (1889-1927), a founding member of the Communist Party of China.