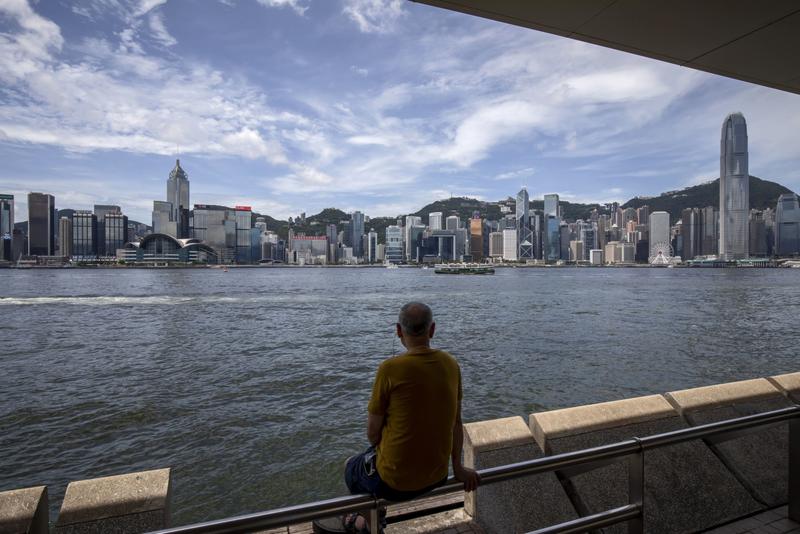 A man sits by the Tsim Sha Tsui waterfront as buildings forming the city skyline stand across the harbor in Hong Kong, China on June 29, 2020. (PAUL YEUNG / BLOOMBERG)

HSBC Holdings Plc and other banks in Hong Kong are urging staff to work from home again, pausing plans to bring more people back to their offices as the city seeks to tamp down a spike in coronavirus cases.

Staff are “strongly encouraged to work from home until further notice” if they are in a role where remote working is feasible, effective Wednesday, HSBC said

Staff are “strongly encouraged to work from home until further notice” if they are in a role where remote working is feasible, effective Wednesday, HSBC said in an internal memo.

Those who must work at HSBC premises should discuss working arrangements, including staggered arrivals and lunch times, with their line manager. A spokeswoman for HSBC, which employs 22,000 in the city, confirmed the contents of the memo.

Citigroup Inc is pausing its efforts to bring more people back to the office, according to spokesman James Griffiths. The bank will move to about 70 percent working at home from the current 50 percent, he said.

Standard Chartered Plc, another big employer in the city, is also encouraging its employees to work from home if possible, with a “hard-split team” approach in place, a Hong Kong-based spokeswoman said in an email.

BNP Paribas SA is reinstating a split team arrangement, gradually letting some staff work from home, according to an internal notice seen by Bloomberg. A Hong Kong-based spokeswoman declined to comment.

Meanwhile, Societe Generale SA said in an email that alternative working arrangements, including distancing and working from home, are in place to reduce contamination risk.

Hong Kong’s officials detected 40 new local cases on Tuesday, bringing the total over the past week or so to 224 people. The spike is disrupting moves begun weeks ago to let more employees resume working from their offices in the city.

Bars, gyms and beaches will be closed for a week starting Wednesday, public gatherings limited to four people, and fines will be imposed on those refusing to wear masks on public transport as officials try to slow the growing resurgence.