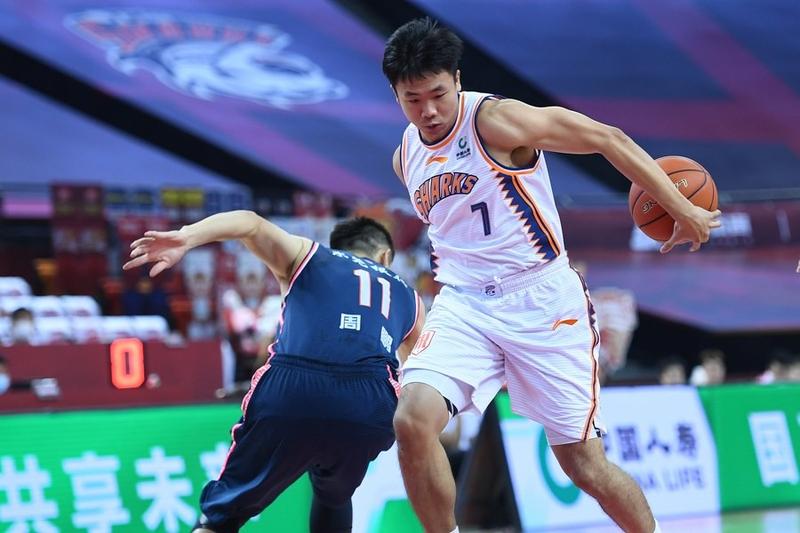 Five players scored in the double digits for Guangdong to ease past the Shanghai Sharks 122-89. Weems finished with a game-high 34 points, while Zhou Peng and Ren Junfei had 24 points and 23 points respectively.

Guangdong opened with a 12-0 run and faced little resistance from Shanghai. The game turned into a rout when Weems scored 11 points in the third quarter for Guangdong to enlarge the margin to 27 points.

Thanks to 23 points and 17 rebounds from Ekpe Udoh, Beijing overwhelmed Jilin 91-64 to win five games in a row and gained a playoff spot.

Jeremy Lin (left) of the Beijing Ducks goes for a basket during a match against the Jilin Northeast Tigers in the 2019-2020 Chinese Basketball Association (CBA) league in Qingdao, east China's Shandong Province, July 10, 2020. (GUO XULEI / XINHUA)

Beijing used a tough defense to build a 31-18 lead in midway through the second quarter. Jilin went on a 9-3 spurt to cut the lead to eight points, but Zhai Xiaochuan scored six straight points and Zhu Yanxi hit a buzzer-beating three-pointer ensured Beijing led by 18 points into half-time. Jilin never saw a chance to pull the game back in the second half.

Zhu had 18 points for Beijing, while Jeremy Lin and Zhai Xiaochuan had 12 points apiece.

American John Groover, who used to play in non-league basketball matches in China, had his CBA debut with Xinjiang.

In another game, bottom side Bayi Rockets shocked the Jiangsu Dragons with a 94-83 victory.